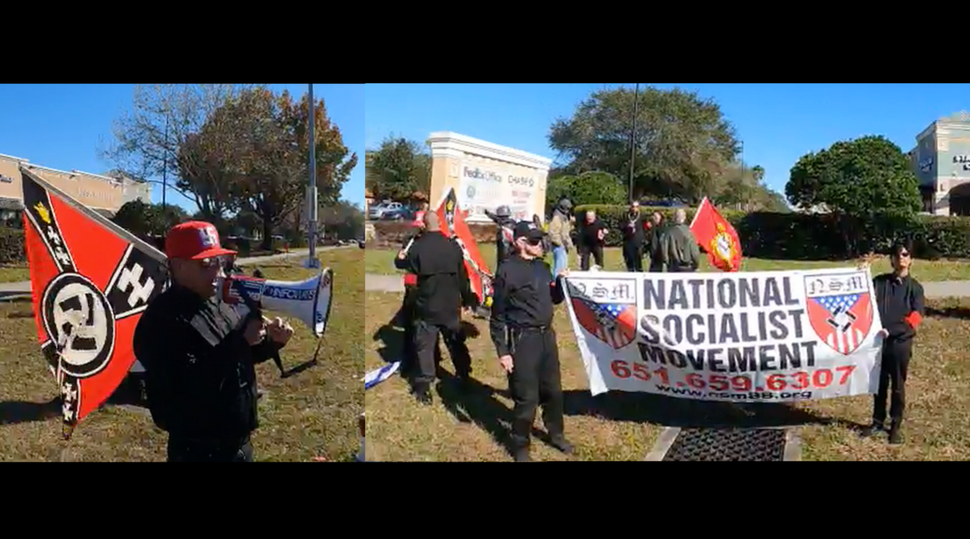 (JTA) — In Orlando, neo-Nazis yelled antisemitic slurs from a highway overpass. In Chicago, a Jewish school and a synagogue were vandalized. In Washington, D.C., a man was arrested and charged with spray painting swastikas on a train station.

The turbulent weekend — which also included a rally in Ottawa against COVID-19 vaccine mandates that featured swastikas — comes just a few weeks after the hostage situation at a Texas synagogue left American Jews feeling vulnerable in their synagogues.

A video of the Orlando rally that spread on social media on Monday showed protesters standing on a highway overpass in front of banners of swastikas. One audibly yells “Heil Hitler.”

The Orlando Sentinel reported that the group shouted other antisemitic slurs, and an array of Florida officials, including Republican Sen. Rick Scott and Democratic House Rep. Val Demings, condemned the gathering.

The highway overpass location resembled similar demonstrations in Austin, Texas, in October in which a group called the Goyim Defense League hung a sign that said “Vax the Jews” from an overpass.

Nazi rally over I4 in Orlando pic.twitter.com/0tIHYxgF97

On Sunday afternoon, a Jewish school and synagogue in Chicago’s West Ridge neighborhood were vandalized. Graffiti was sprayed on the F.R.E.E. Synagogue, and a window was smashed at Yeshivas Meor Hatorah Of Chicago, where a cargo container was also painted on. The suspect also apparently tackled someone to the ground before running away, according to the local ABC news station.

Debra Silverstein, a local alderman whose office is located next to the synagogue, said police were still investigating the incidents. “No official pronouncement has been made on a possible motive, but these have all the hallmarks of hate-based crimes,” she said.

In Washington, D.C., police arrested a 34-year-old man named Geraldo Pando who was suspected of spray painting several swastikas around the entrance to Union Station, an Amtrak station near Capitol Hill, early Friday morning. Washington Mayor Muriel Bowser responded to the incident in a tweet.

“This symbol of hate displayed in our city is both shocking and unsettling, particularly on the heels of International Holocaust Remembrance Day,” she wrote.