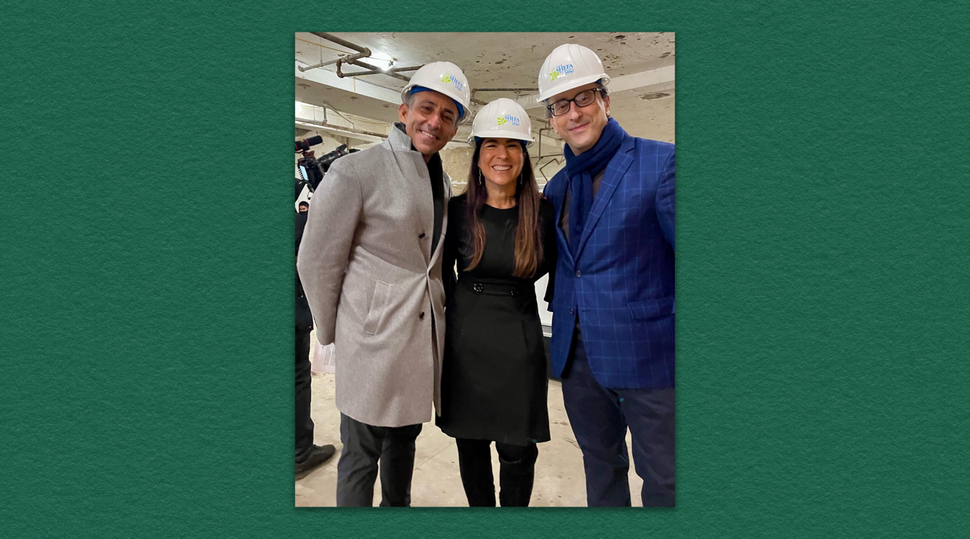 Leaders of The Shefa School — Simon Shemia, board president, Ilana Ruskay-Kidd, founder and head of school, and Robert D. Frost, board member — pose at a ceremony marking the start of construction on a building that will triple the school’s size, Feb 1, 2022. (Caroline Weinstein)

(JTA) — (New York Jewish Week via JTA) — The Shefa School, a Jewish school for students with learning disabilities whose Hebrew name means “abundance,” is living up to its moniker.

On a chilly Tuesday morning on the Upper West Side, Shefa staff and families celebrated the beginning of construction on a new campus at 17 West 60th Street that will expand the school from 25,000 square feet to 75,000 square feet.

The new campus — located just a block from Central Park and Columbus Circle — will be situated in a building that has not been occupied for more than 40 years. Renovation on the 12-story building will include building out classrooms, a beit midrash for study and prayer, a large gym, a cafeteria, gathering spaces for programming and celebrations and an outdoor rooftop. The project is set to be completed in the spring of 2024.

“It has been an amazing journey from a school of 24 students in a few classrooms to our own building, in a prime location, where we will be able not only to accommodate more students but also provide a robust facility, and serve as a hub for serving the larger Jewish community in better serving children with learning disabilities,” founder and head of school Ilana Ruskay-Kidd told The New York Jewish Week.

According to the New York Post, the school purchased a 99-year ground lease for the entire building for $49.5 million. To help fund the move and the renovations, the school announced the Sowing the Seeds of Abundance: A Capital Campaign for the Shefa School in August, with an early goal to raise $20 million.

The project was first announced to families at the school last August.

Founded in 2014, Shefa is a pluralistic Jewish day school serving students with language-based learning disabilities. The current campus  in Manhattan’s Nomad neighborhood, at 40 E. 29th St., is open to students in grades 1 through 8.

In 2018, JTA reported on Shefa’s approach to learning and how the school’s first graduating eighth grade class fared in the transition to traditional high school environments.

From 24 students in the school’s first year the school has grown to more than 200. With the new campus, the school aims to expand capacity to 350 students, as well as formally establish a teaching lab for Jewish special educators and leaders, which will be known as The Shefa Center, according to Ruskay-Kidd.

“While we know that there is actually no ground to break here, this is a moment we are delineating as we have completed some significant milestones, thanks to the help of many who will be joining us at the groundbreaking,” Ruskay-Kidd said ahead of the ceremonies Tuesday meant to mark the start of the building project.

—
The post A Jewish school for kids with learning disabilities is building big on the Upper West Side appeared first on Jewish Telegraphic Agency.