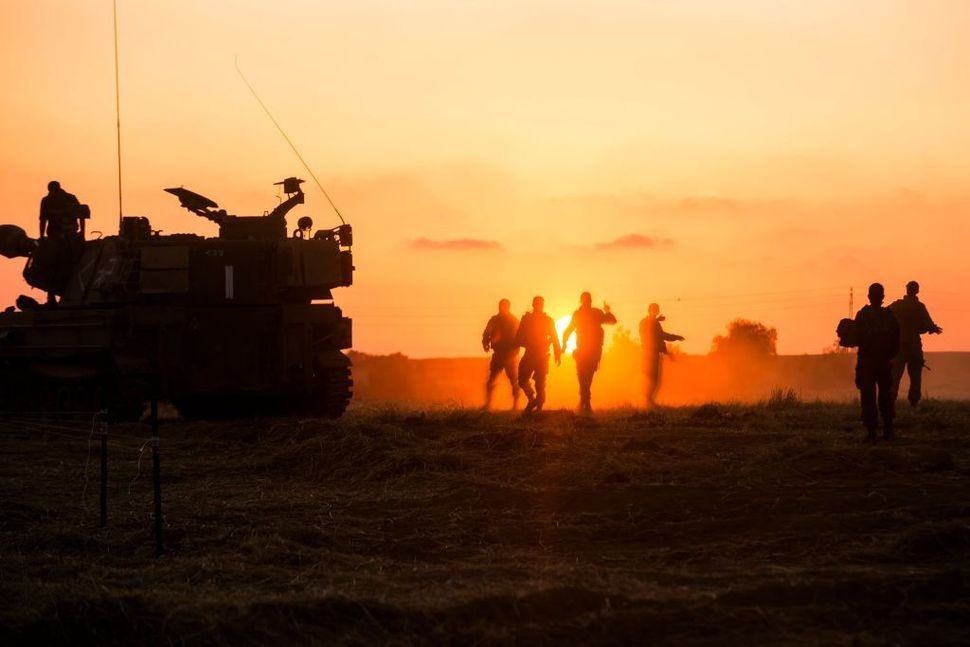 Israeli soldiers prepare their artillery unit near the border with Gaza Strip on May 14, 2021.

This story originally appeared on Haaretz, and was reprinted here with permission.

The Arab victim of a mob attack by Jewish assailants in the Tel Aviv suburb of Bat Yam during last May’s war with Gaza attempted suicide late Monday night.

The man, Said Moussa, was taken to Shamir Medical Center at the central Israel city of Tzrifin and is now in stable condition.

Moussa has suffered serious depression since last May’s attack, in which he was seriously injured. With the exception of a stint in the hospital to undergo surgery, Moussa has rarely left his home in Ramle, southeast of Tel Aviv, since the attack. “I’ve been here for seven months, sitting with myself on the couch,” Moussa told Haaretz about a month ago.

Moussa was among the most seriously injured victims of the unrest that broke within Israel during Operation Guardian of the Walls. He has not received adequate support and assistance from the government, in part due to his lack of cooperation. For example, he paid for a series of dental treatments out of his own pocket at a dentist in the West Bank, rather than obtaining the appropriate referral for treatment subsidized by Israel’s National Insurance Institute.

Friends, family members and Moussa’s lawyer said that they urged him to file a claim for government-funded treatment and attend his appointments at the National Insurance Institute, but were unsuccessful. People close to Moussa said that he had not been himself in recent months.

Despite his clear emotional duress, it was only in January, more than six months after the attack, that the National Insurance Institute sent a rehabilitation specialist to his home to assist him in filing his claims for the benefits he is entitled to.

“I’ve been to a psychiatrist twice,” Moussa said recently. “He didn’t ask too many questions. He gave me a prescription and that was it,” he said. “If people hadn’t intervened [during the attack], the government wouldn’t have taken an interest.”

Moussa, who is tall, broad and quiet, met with Haaretz at his home last month. “This is how I always am,” he said, “I prefer my own quiet.”

A stack of letters from the National Insurance Institute were at his home, but Moussa didn’t seem aware of their contents. He said he has a friend who is dealing with them. He also didn’t seem fully aware of a segment about him that aired on Channel 13’s investigative journalism program, “Hamakor.”

Ahmed Mashharawi, a former Tel Aviv councilman who is a friend of the family, began assisting Moussa the day after the attack, particularly in filing civil suits against the attackers.

“You look at the video and ask yourself how this person is still alive. People only stopped [beating him] when they thought he was dead,” Mashharawi said. “His biggest source of unease is that he still can’t return to work and support his family in a dignified way as he had been doing prior to the attack.” Mashharawi called for donations and aid to Moussa’s family, which is in dire financial state.

So far, 10 people have been criminally charged in the attack against Moussa. One of them, Netanel Binyamin, was indicted for a politically motivated attempted murder. The others were charged with various offenses related to violence stemming from racist motives and terrorist acts involving aggravated intentional harm.

Only one person has been convicted. Lahav Nagauker was sentenced to a year in prison for a number of racially motivated offenses as well as incitement to violence and racism.

Last month, the prosecution appealed the sentence as too lenient, claiming that although Nagauker did not have an active role in the attack itself, he incited the crowd and gave an interview with Kan Channel 11 television boasting of his actions.

This story originally appeared on Haaretz, and was reprinted here with permission.