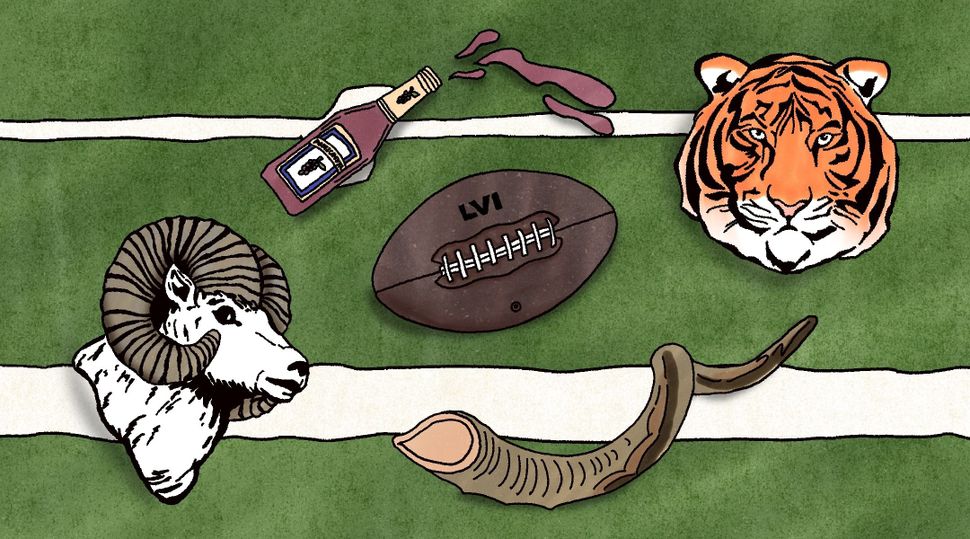 This year’s Super Bowl has its share of Jewish connections. (Art by Mollie Suss)

LOS ANGELES (JTA) — On the surface, there is nothing explicitly Jewish about Super Bowl LVI.

Unlike recent years, there are no Jewish players in the big game. There will be no Ali Marpet blocking for Tom Brady, no Julian Edelman reeling in a remarkable catch from Tom Brady. (It won’t even feature Tom Brady, a rare occasion for the past decade.)

But Sunday’s game between the host Los Angeles Rams and the Cincinnati Bengals still feels Jewish. In part, that’s because the teams represent two of America’s most storied Jewish communities.

Los Angeles is home to America’s second-largest Jewish population, behind only New York City, and includes the largest enclave of Israelis outside of Israel. Eric Garcetti, who was elected in 2013 and is leaving his post soon to become U.S ambassador to India, is the city’s first Jewish mayor.

Then there’s Cincinnati, the home of some of the earliest American Jewish institutions.

The American Israelite, the longest-running English-language Jewish newspaper still publishing in the U.S., was founded in Cincinnati in 1854. The first association of American synagogues, the Union of American Hebrew Congregations — which is now the Union for Reform Judaism — formed there in 1873, followed by the first Jewish institute of higher education, Hebrew Union College, which opened in 1875. Before it moved to the East Coast, the popular kosher food producer Manischewitz was founded in Cincinnati.

Today Los Angeles is also home to an HUC campus, making Sunday’s game a rare chance for two partner Jewish academic institutions to heckle each other.

In fact, an ice cream wager hangs in the balance: The losing campus has agreed to send 12 pints of its city’s best ice cream to the victor campus. Cincinnati would send Graeters, while LA would send Wanderlust. Rabbi Jonathan Hecht, dean of Hebrew Union College’s Cincinnati campus, said there is no competition in that department.

“If this thing were to be settled on the quality of the ice cream, Cincinnati has already won!” he said.

Beyond HUC, the Jewish Telegraphic Agency reached out to Jewish fans of the two teams to ask a simple question: Why does your team deserve to win? More specifically, what is the Jewish reason your team should hoist the Lombardi Trophy when all the confetti clears at SoFi Stadium?

Here are some of the most impassioned responses, lightly edited for length and clarity.

You asked why the Bengals deserve to win?

Well, that’s easy: Judaism is a religion based on a deep and abiding faith in the coming of the Messiah. We have been waiting years and years, and even though the Messiah might tarry, we still believe that day will come!

The Bengals reflect that hope in a deep and profound way.

You see, Cincinnati is, perhaps, the place from which the messianic age will begin.

So, why shouldn’t the Cincinnati Bengals win the Super Bowl, bringing us one step closer to the messianic age? Why shouldn’t our team’s victory be the event that helps usher in a new era in world history? If not for the world, then at least for the NFL.

The Bengals have come from behind again and again. We have proven to the world that those with courage, hope and faith are rewarded.

LA is a lovely place, and Rams do produce shofarot, but LA fans will no doubt sound the shofar this year to announce that the time of the Cincinnati Bengals has arrived!

Whence do we know that a “Ram” denotes the messianic age? As it says in the Book of Joshua (20:8): “And across the Jordan… Ramoth in Gilead from the tribe of Gad.”

Carried back into captivity “by the Rivers of Babylon” (Ps. 137:1), they sat and wept in the city of St. Louis. Do not read the Rivers of “Babylon” but rather the “Mississippi.”

The Bengals are the clear choice for casual Jewish fans looking to root for one of the teams. I give you the following arguments:

For me as a demographer, the Rams are very Jewish because they arrived in LA in 1946, along with 700 new Jewish families.

When I was growing up, the Rams were the only major league team in the city — more than a decade ahead of the Lakers and Dodgers. Moreover, those teams brought their Minneapolis and Brooklyn references with them. The last trolleys you could dodge in LA were decommissioned shortly after the (Trolley) Dodgers got here and the few lakes we have in LA are small and artificial.

Of course, the Rams departed for St. Louis in 1995, but there’s a Jewish angle there too. When owner Caroll Rosenbloom died and left the team to his second wife, the non-Jewish Georgia Frontiere, she skedaddled out of town as soon as she could, taking the Rams with her. That move, arguably, was a casualty of intermarriage.

My beloved Cincinnati Bengals have tormented me and my fellow die-hards for nearly 40 years (31 can be rounded to 40 because I said so) in the Wilderness of Terrible and Close-Enough-To-Give-You-Hope-To-Squash-It Football.

We wandered through The Lost Decade of the ’90s, Carson Palmer’s deliverance to the operating table by our hated rival, and Andy Dalton’s tenure that feels very King David-esque — red hair and questionable decision making included.

Today, on the precipice of glory, I have been led to emotions and ethical situations that I know not how to express or easily discern. What is it like to feel pure joy over my sports team? Should I help the guy sitting in front of me at Paul Brown Stadium light his victory cigar despite this clearly being a no-smoking venue? How do I celebrate without becoming That Unbearable Sports Fan at work? Will my Jamarr Chase jersey smell if I wear it every day throughout the playoffs? Does washing said smelly jersey affect the game’s outcome?

Regardless, I will be preparing for the Super Bowl this Shabbat by learning and reading Exodus 29, in which we sacrifice two rams, one for each half of domination.

The Rams deserve to win to right a terrible wrong.

The Rams were previously owned by a wonderful Jewish family, the Rosenblooms. Carroll Rosenbloom, later in life, fell in love with a character named Georgia Frontiere, whom he ultimately married. Soon after they were wed, Carroll mysteriously drowned off the coast of Florida.

Within a year, Georgia and her new husband Dominic Frontiere took over the team and fired Carroll’s son, Steve Rosenbloom, as the team president. She then soon decided to take a large fee to relocate the team to St. Louis, where they played for 25 years.

Sundays in LA were bleak for 25 years as an entire generation suffered with no local football team to support. This unfortunately led to some fans supporting teams from other places, both near and far. In other words, football fans in LA were stranded in exile for 25 years.

Then, our hero, Stan Kroenke, bought the team and relocated it back to its rightful home in Los Angeles. Kosher tailgates began to thrive again and the LA Jewish population could come together to cheer and celebrate their long beloved Rams!

Obviously the Bengals deserve to win the Super Bowl as we’ve wandered the football desert for 40(ish) years. It’s our time.