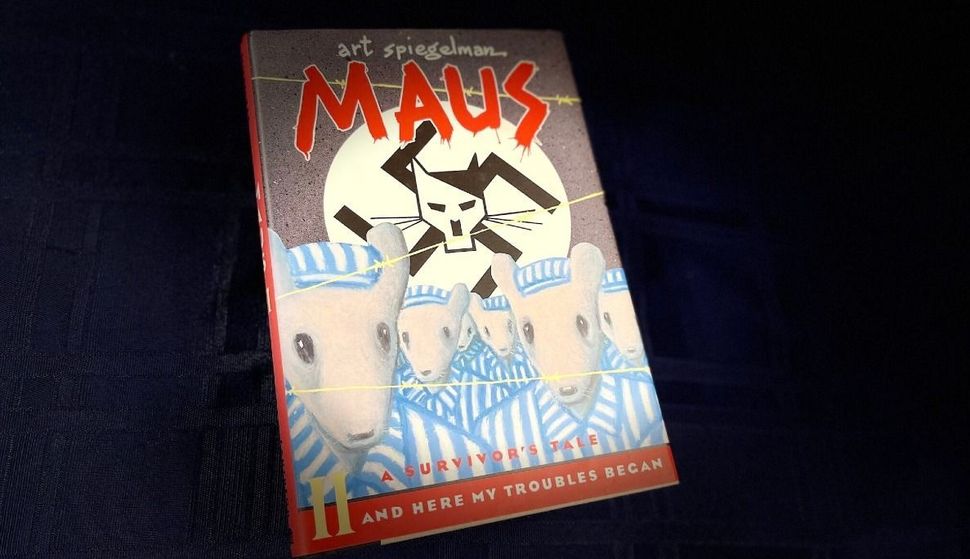 “Maus” is a book about guilt in many forms, and how it can be transmitted through generations. Photo by Jewish Telegraphic Agency

(JTA) – Demonstrators in McMinn County, Tennessee, on Thursday called on the local school board to reverse its recent decision to remove “Maus,” Art Spiegelman’s 1992 Pulitzer Prize-winning graphic memoir on the Holocaust, from the middle school curriculum, adding to complaints by Jews around the country over the past few weeks.

The board, however, rebuffed the request, declining to bring up the matter for discussion.

“This board is the arbiter of community standards,” one member said, to a chorus of boos from people in attendance.

Several speakers, including at least one local educator, appeared during the board meeting’s public comment phase to register their disagreement with the book’s removal.

The first speaker, who said he was Jewish, said the news “came as a total shock” and that the removal sends the wrong message to the Jewish community.

“I am immensely disappointed in the decision to remove material regarding my own heritage and my people’s history,” said the speaker. “I do know at least one survivor of the Holocaust who lives in the area. Did the board think about what message we would be sending by removing the unique expression of Jewish perspective?”

The speaker also complained the alternatives to “Maus” offered by the school district lack almost any Jewish voices and that it was inappropriate to teach the Holocaust with an emphasis on the perspective of non-Jews.

Another speaker argued that the board had erred by not following the school district’s policies in removing “Maus,” which triggered a request by the board chair for clarification from the board’s attorney.

Later on, before the meeting came to an end, board member Mike Cochran said he recently consulted a local rabbi and that the rabbi supports the decision to remove “Maus.” The rabbi, Cochran added, felt that the book was also inappropriate for his synagogue.

He declined the Chattanooga newspaper’s request to name the rabbi. Two synagogues in nearby Chattanooga, along with the local Jewish federation, helped organize a live conversation with Spiegelman in the wake of the ban.

Cochran also said he had read “Maus” and that his opposition to the book’s inclusion in the curriculum “had nothing to do with the Holocaust,” the Times Free Press reported. After the meeting, he reportedly said that the board is not revisiting its decision because “there’s nudity that’s not necessary.”

The post ‘Maus’ supporters rally and Tennessee school board doubles down in first meeting since book’s removal appeared first on Jewish Telegraphic Agency.