Trude Feldman, Jewish reporter who spoke to presidents and prime ministers, dies at 97 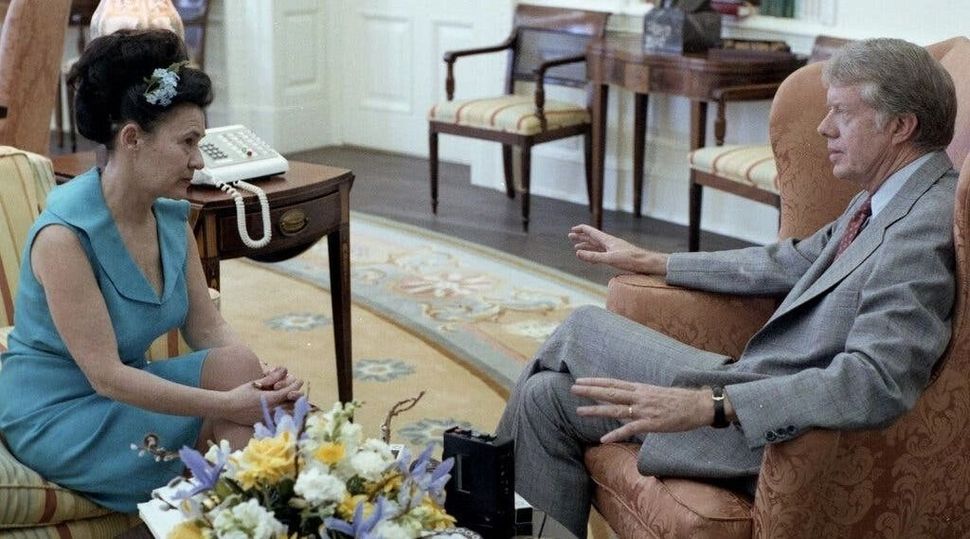 WASHINGTON (JTA) — The scene as I remember it is the outside of a Washington hotel, one of the stately luxury palaces Israeli leaders indulge when they’re here on business. A gaggle of Israeli and Jewish media is waiting for Ehud Barak. He gets out of an SUV. We shout out questions. He ignores us.

But then he sees Trude Feldman, and he grins and he hugs her, squeezing her tiny frame close to his, her long coat scraping the pavement, her huge bun of gray hair popping out. Barak grins. “Trude Feldman!” he exclaims.

That was the power of Trude Feldman, her ubiquity, her grandmotherly affect, and her relentlessly softball questions affording her the company of the powerful.

I can’t remember exactly when the scene with Feldman and Barak played out — was it when he was prime minister, defense minister, was he in the opposition? One reason why it’s hard to pin down is that Trude Feldman was always there.

Feldman, who freelanced for media outlets mainstream, marginal and Jewish, and who interviewed multiple Israeli prime ministers and every president from Jimmy Carter to George W. Bush, died on Jan. 23 in Washington. She was 97.

She was famous for scoring presidential exit interviews, the final official media encounter. She also relished the Yom Kippur interview, which she would pitch as an opportunity for redemption. That’s what got her the first interview with Bill Clinton after he copped in 1998 to yes, having sex with that woman.

The mainstream media mocked her for her softballs — Feldman didn’t mention Monica Lewinsky once, instead asking Clinton, “What would you say now to the children around the world who admire you and look up to you as a role model?”

Clinton, a savvy media player, took the pitch. “What has been really helpful to me in the last few weeks is religious guidance that I have been given about atonement from the Yom Kippur liturgy, to remind me that while it is unusual for the president to be in a public situation like this, the fundamental truth is that the human condition — with its frailties and propensity to sin — is something to I do share with others,” he said. “I can believe in the reality of atonement and ultimately of forgiveness.”

Her soft approach was immortalized by “Saturday Night Live” player Victoria Jackson, her hair piled into Feldman’s chaotic bun, in a 1988 sketch in which Robin Williams played a befuddled President Ronald Reagan under siege because of the Iran Contra scandal and seeking to avoid hard questions. “Trudy! Trudy! Trudy!” an aide whispers to Reagan as he seeks refuge during a press conference. Williams calls on Trudy.

“Mr. President this may seem like a lob,” says Jackson as Feldman. “But what would you enjoy talking about?”

Her nephew, Rabbi Daniel Feldman of Teaneck, acknowledged in a remembrance for the Jewish Standard that his aunt’s approach drew mockery — but he said it also elicited truths.

“The joke, however, was on everyone else,” he wrote. “Paired with her signature persistence, her style more often elicited not puff but profundity, more sincerity than sugar. The unique access she earned — baffling to some, understood to the astute, acknowledged by all — yielded memorable results.”

She was beloved enough by the powerful that when George H. W. Bush celebrated his 75th birthday in 1999, Sen. Joe Lieberman, D-Conn., had read into the congressional record what he termed “a wonderful story by the indefatigable White House Correspondent, Trude Feldman.”

Her papers, including stacks of material documenting the famous and powerful she befriended and covered, are preserved by George Washington University in Washington D.C.

“Don’t take notes, you’re making me nervous!” she told an aide to Ronald Reagan during a 1986 interview. “I’m not gonna hurt the guy!”

Feldman was a fluid and engaging writer; she made learning nothing in an interview sound, well, momentous.

“As President and Vice President (from 1981 to 1989), the two men ate lunch together every Thursday in the Oval Office and shared each others’ views on domestic issues and foreign affairs as well as personal sentiments,” she wrote in the 1999 paean to Bush, which included interviews with Bush and Reagan. “To this day, neither one has revealed those conversations.”

The daughter of a rabbinical family, she launched her career covering the 1961 trial of Nazi mass murderer Adolf Eichmann in Jerusalem, where she put her training as a Hebrew teacher to use by teaching the language to the Nazi’s lawyer. (She also taught Hebrew to famed converts Sammy Davis Jr. and Elizabeth Taylor, and to Paul Newman on the set of “Exodus”.)

The promise of friendly treatment helped Feldman secure her interviews, but so did her persistence. George H. W. Bush’s spokesman, Marlin Fitzwater, in a 1995 memoir called her a “short, pleading little old lady in a floral print dress.”

“Trude has perfected her coverage of the White House based on one simple principle,” The New York Times quoted Fitzwater as saying in his book. “No one wants to be rude to an old lady.”

An anonymous White House insider was blunter in explaining to The Washington Post how she scored the Clinton interview. “She bugs people incessantly until someone breaks down and says yes,” he said.

She was a constant presence in the White House — her press pass was suspended for 90 days in 2001 when a security camera caught her after hours snooping around a desk in the building. Jake Siewert, a Clinton spokesman, told Newsweek in 2003 that “I don’t think you could put five of us in a room for more than an hour without sooner or later the conversation circling back to Trudy Feldman.”

Bill Jones, another one-time White House correspondent, wrote in a remembrance for World Tribune, one of Feldman’s clients, that there were similar conversations in the Secret Service. She “had the necessary chutzpah to get her way when she ran into obstacles in her attempt to write a story.”

Feldman was part of a cohort that for years haunted the White House, the Pentagon, the State Department and Congress — stringers accredited by one of their gigs, often an outlet no one had heard of (Feldman’s was “Trans Services”) who seemed to age in place.

There are none left — none that I know of, anyway — phased out by a press corps and a bureaucracy that after the Sept. 11, 2001 terrorist attacks took themselves much more seriously. Too seriously to accommodate the lone voice at the back of the room asking the oddball question, the one you laughed at until you realized that maybe there were some questions not in your playbook that needed asking. Slowly, sometimes gently, sometimes not, these second-stringers were asked to vacate their hard-earned cubbyholes.

The White House revoked Feldman’s press pass in 2007, but she continued to work the city, showing up at AIPAC conferences, outside hotels — until she didn’t.

Her nephew, Rabbi Daniel Feldman, in remembering his aunt cites the commandment in Exodus not to bear false witness, and an interpretation of the commandment in the Talmud: “do not accept, or transmit, a negative report that is false, or purposeless.”

Trude Feldman, Jewish reporter who spoke to presidents and prime ministers, dies at 97