Whoopi Goldberg returns to ‘The View’ after suspension over Holocaust comments 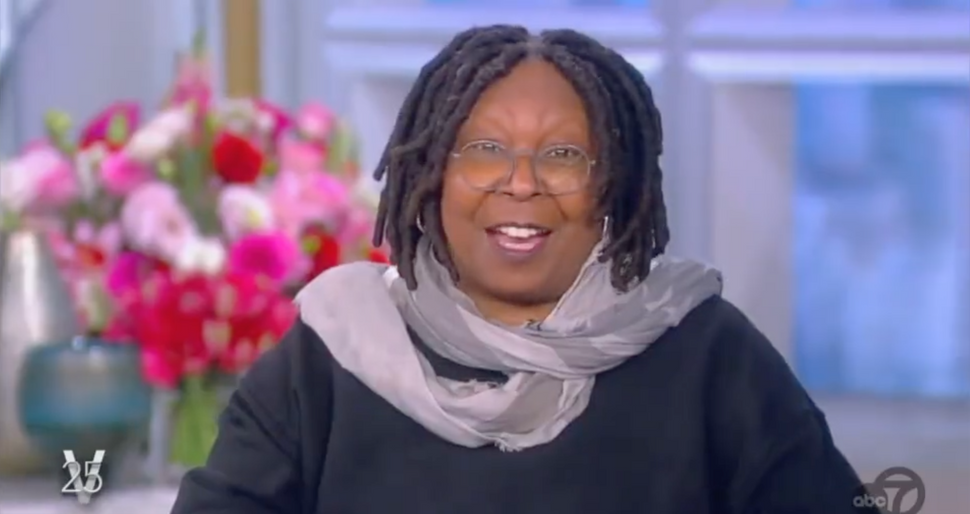 ‘We’re going to keep having tough conversations,’ said Whoopi Goldberg on ‘The View.’

(JTA) — Whoopi Goldberg returned to her hosting chair on “The View” Monday after a two-week suspension for her much-criticized comments about the Holocaust, pledging to “keep having tough conversations.”

“I listened to everything everybody had to say, and I was very grateful,” Goldberg told her viewers in a brief address at the top of the talk show as her co-hosts told her they missed her.

“It is an honor to sit at this table and be able to have these conversations, because they are important,” Goldberg said, without offering another direct apology or mentioning the Holocaust or Jews at all.

“Conversations,” she said, “are important to us as a nation, and to us more so as a human entity.”

Back a day early: Whoopi returns to The View following a 2-week suspension over her comments about the Holocaust and race. “I am back,” she boasted. “We’re going to keep having tough conversations, and in part because that’s what we’ve been hired to do.” pic.twitter.com/NWmvPWtYKx

Goldberg’s suspension had followed her Jan. 31 remarks on the program that “the Holocaust is not about race,” but rather about “man’s inhumanity to man.” Many groups, including the Anti-Defamation League, objected, saying that Hitler saw his planned extermination of the Jews as a racial project. Goldberg apologized, but further comments she made on the subject — including on “The Late Show With Stephen Colbert” — continued to add fuel to the fire, leading to ABC News President Kim Godwin announcing her suspension the following day “to take time to reflect and learn about the impact of her comments.”

Jewish figures across the political spectrum, even those who were angered by Goldberg’s comments, objected to her suspension, saying the network’s decision destroyed what could have been a learning opportunity. Nathan Hersh, former managing director of the nonprofit group Partners for Progressive Israel, said the punishment was “un-Jewish” in an op-ed for The New York Times.

For her part, Goldberg expressed an eagerness to use her platform to wade into pointed conversations.

“There is something kind of marvelous about being on a show like this because we are ‘The View’ and this is what we do,” she said. “Sometimes we don’t do it as elegantly as we could.”

—
The post Whoopi Goldberg returns to ‘The View’ after suspension over Holocaust comments, saying, ‘I listened’ appeared first on Jewish Telegraphic Agency.

Whoopi Goldberg returns to ‘The View’ after suspension over Holocaust comments