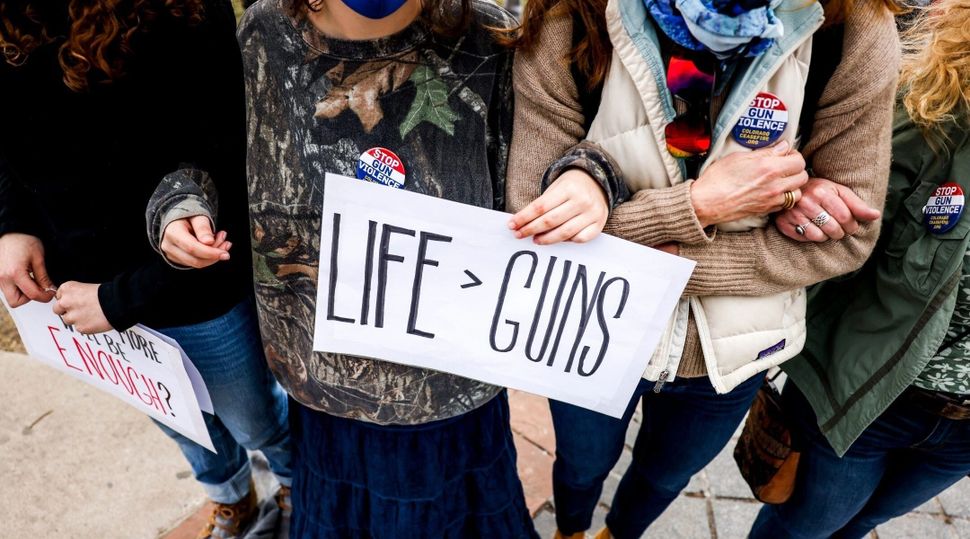 A woman holds a sign as people link arms at a gun reform rally at the Colorado State Capitol in Denver, March 28, 2021. (Michael Ciaglo/Getty Images)

WASHINGTON (JTA) — The Jewish Federations of North America has removed advocacy for gun control, voting rights and LGBTQ protections from a key priorities document, but a top official says the change does not diminish the organization’s commitment to the issues.

In comparison to recent years, the 2022 “Jewish Federations Public Priorities” document, sent on Monday to constituent Jewish federations, is substantially revised. While the 2021 and 2022 documents are the same length, about 500 words, the more recent version is written in more sweeping language and avoids mention of specific equity issues and legislation.

Whereas the 2021 document included “Promoting reasonable gun violence prevention measures as a means of safeguarding the Jewish community from violence and combating antisemitism,” the 2022 document does not mention guns at all.

Language about LGBTQ protections, part of the annual document for years, and voting rights, which appeared only in the 2021 version, are also notably absent in the 2022 document.

The new document instead says the umbrella group is focused on “Combatting all forms of hate, discrimination, racism, and extremism, including by supporting legislation and resources to address hate crimes, policies that ensure justice and equity, and resources to combat abuse and harassment.”

A top JFNA official said the move was not about policy changes but about making priorities more clear to constituent federations and Jewish Community Relations Councils, allowing them to be more “nimble” as they lobby lawmakers. The JFNA and local federations employ lobbyists to advocate for legislation on the state and federal levels.

“We are focusing on the same important bipartisan values that Jewish communities have long held dear, while approaching our advocacy in a way that allows us to be a more nimble political force as we lead and work across coalitions,” said Elana Broitman, a senior vice president for public affairs at JFNA.

The change comes as the JFNA has faced accusations recently that it is seeking to avoid controversy and identification with causes that political conservatives have objected to — such as the Black Lives Matter movement.

The order in which the priorities appear has also changed annually in recent years. In 2018, the lead focus was on protecting Medicare, at a time when then-President Donald Trump and the congressional Republican leadership were planning substantive changes in healthcare policy; in 2019, the focus was similarly on older Americans. In 2020 and 2021, the lead focus was on Jewish security, in the wake of intensifying antisemitic violence.

This year, the top-listed priority is “Jewish communal security and support for Israel.” The JFNA official said that was a function of an intensification of anti-Israel criticism and activity in the wake of last May’s Israel-Gaza conflict, in addition to the continued security threat facing Jewish institutions. This official cited the hostage-taking in Colleyville, Texas last month.

A JFNA official who asked to remain anonymous also said the new omissions would not hinder advocacy for gun control. “Guns would naturally fall under security,” which is the top category in the 2022 document, they said. The official noted advocacy last year for legislation that would address gun violence and mental health and said that emphasis would not change.

JFNA officials noted the recent launch of JEDI, a program for “Jewish equity, diversity and inclusion,” that is preparing a curriculum for Jewish professionals on race, LGBTQ and other inclusion issues.