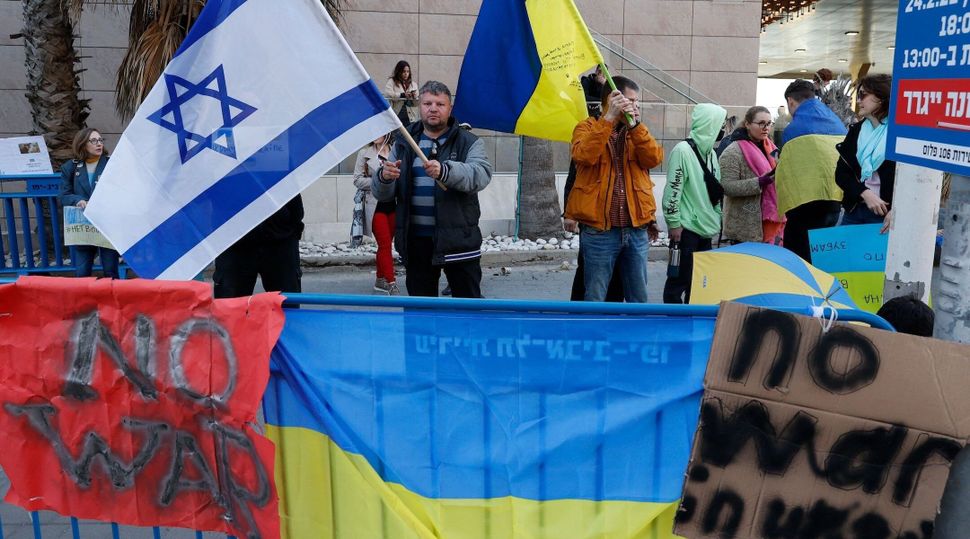 Demonstrators raise the Israeli and Ukrainian flags at a protest against Russia’s military operation in Ukraine, in front of the Russian embassy in Tel Aviv, Feb. 24, 2022. (Jack Guez/AFP via Getty Images)

The day Russia invaded Ukraine was a stark exception.

Lapid, ensconcing Israel In the West, forthrightly condemned Russia. Bennett, wary of inserting Israel into a no-win conflict, effectively said the war was none of the country’s business.

The differences exposed the perils Israel faces as war once again rips through the European continent: side with the Western ethos that Israel has embraced since its inception, or mind the Russian behemoth that looms on Israel’s doorstep, in Syria.

“The Russian attack on Ukraine is a serious violation of international order,” Lapid said at a press conference and at noon Thursday on Twitter. “Israel condemns the attack.”

Bennett issued his first statement on the war late Thursday night, and spoke of planning evacuations of Israelis from the region, assisting those Jews who want to leave and offering humanitarian assistance. He did not assign blame or fault, saying only that there would be “continued regular discussions and assessments of the situation to evaluate future consequences (to the extent that there are any) for Israel.”

In a speech earlier in the day to an army officers’ graduating class, excerpts of which he posted on Twitter, Bennett articulated the philosophy that undergirded his reluctance to take sides. “These times teach us that, to our regret, wars between armies are not a thing of the past,” he said. “The world is a lot less stable, and our region changes daily.” He did not mention Russia.

The omission frustrated Natan Sharansky, a former Prisoner of Zion , or political prisoner, of the Soviet Union who has served as an Israeli Cabinet minister and headed the Jewish Agency for Israel.

Speaking to the Jewish Telegraphic Agency after a day of appearances on Israeli media, Sharansky said he felt like Don Quixote fending off journalists and others who wondered why Israel should get involved.

“On all the panels and all the interviews I was usually in the minority of one who says that we have to take the world’s position,” he said.

Sharansky said he understood what concerned his interlocutors: He would want Israel to supply Ukraine with the anti-missile defensive systems that served Israel well during wars with Hamas and Hezbollah. His critics ask how that would play in Russia, which has been keeping Syria, Israel’s enemy, from procuring similar systems.

That didn’t make it any less important for Israel to provide a moral voice, he said. “I felt quite embarrassed in the last days that at this critical moment of the future of the world — at this moment of moral clarity Israel is not ready to say it clearly,” he said. Hearing Lapid speak was a relief, he said. “It was really wonderful.”

Shalom Lipner, a senior fellow for Middle East programs at the Atlantic Council, said Russia’s presence in Syria since 2015 — Russia helped its client, the Assad regime, quell a civil uprising — meant Israel had to tread carefully.

“It certainly has concerns about deconfliction with Russia,” said Lipner, who served as a staffer to multiple Israeli prime ministers. “They’re active in this neighborhood.”

Israel, for instance, has to get Russian clearance to fly over Syria, said Jonathan Schanzer, the senior vice president at the Foundation for  Defense of Democracies.

“Russia controls the airspace in Syria,” he said. “Israel sees the need to continue to conduct operations in Syria to combat Iranian smuggling [of weapons to its Lebanese client Hezbollah] and other malign activity and it needs at a minimum tacit approval from the Kremlin. So it will find that its hands are tied, so long as it prioritizes these military operations.”

Israel’s self-perceived role as a protector of Jews comes into play as well, Lipner said. “The whole piece about having substantial Jewish communities in both countries —  nobody’s looking to burn that bridge,” he said. Additionally, there is a substantial minority of Israelis with Russian citizenship who would have a stake in preserving the robust economic relationship that has developed between the countries.

Scott Lasensky, an Obama administration State Department official who is now a professor of Israel studies at the University of Maryland, said Israelis are predisposed to viewing Putin kindly because of his philosemitism — a friendliness toward Jews that upends centuries of antisemitic hostility from the tsars and then the Soviets.

He recalled Putin visiting Israel in 2014, and meeting with his German language tutor, a Jewish woman who emigrated to Israel. (Putin would have needed German as a KGB officer stationed in East Germany.) “They wowed Putin,” Lasensky said of the Israeli government.

“It’s a different kind of relationship, and they’ve kept it on the warm side,” Lasensky said, noting that Russia allows Israelis visa-free travel, which the United States does not.

Notably, in 2014, when the United States spurred a United Nations General Assembly resolution condemning Russia’s seizure of Crimea from Ukraine, Israel absented itself, breaking its practice of voting with the United States even on the most obscure issues.

Gratitude for favorable treatment while ignoring abuses like the full-scale invasion of a peaceful neighbor is a mark of the “Court Jew,” said Sharansky, and is not becoming of a Jewish state.

“We are at a stage of history where we have a state — cannot afford for our state to become a ‘Court state,’” Sharansky said. “This leader is challenging all the principles of the free world. All those values that the Jewish state is built on. And we cannot simply be silent and say ‘thank you for what you’re doing’ without damage.”

Lasensky also referred to the Court Jew — the go-between who would plead his community’s case to the authorities.

“There are elements of classic Jewish political orientation called ‘shtadlanut,’” a Hebrew term that means “intercessor,” he said. “It’s a sort of quietism that reinforces the dilemma of being a small state” between superpowers.

Sharansky also identified a tension among Zionists that predates the state.

Lapid, who leads the Yesh Atid (“There is a Future”) Party, embodies the left-leaning secular Zionism that shaped Israel from its founding until the 1970s. In that era, Israel regarded itself as an equal among the nations of the world, eager to engage with the crises and triumphs of the international world order, just like any other nation.

Bennett, who leads the Yamina (“Right-wing”) Party, represents the religious and nationalist Zionism that has prevailed for all but a few of the last 45 years, one that perceives Israel’s role as above all protecting Jews, even at the cost of alienating allies.

Lipner said Israel would eventually have to join the West, which is where it has staked much of its fortunes throughout its existence. “There’s no viable role of ‘good cop, bad cop,’” of Israel telling the Russians one thing and contradicting itself the next day, he said. “There’s no siding with Russia against the entire West.”

Lapid and Bennett have already pledged humanitarian assistance to Ukraine. Beyond that, Sharansky said, Israel should be prepared to join the sanctions the Biden administration expects from its allies.

Schanzer said Israel could also play a low-key role with its proven abilities in cyber warfare. “Their prowess in the cyber realm is well known,” he said. “And there is great fear of a Russian cyberattack or multiple cyberattacks in response to sanctions or other measures taken by the West. So there could be ways that Israel could be the eyes and ears, if not the shield, of its Western allies.”

Schanzer also said Israel might serve as an interlocutor — the rare country that enjoys good relations with Russia and the United States. “I don’t know if Israel wants that role, but Israel actually would be considered a neutral party,” he said.

—
The post Why Israel is having trouble picking sides in Russia’s war on Ukraine appeared first on Jewish Telegraphic Agency.