Most of Babyn Yar Holocaust site unscathed by Russian missile 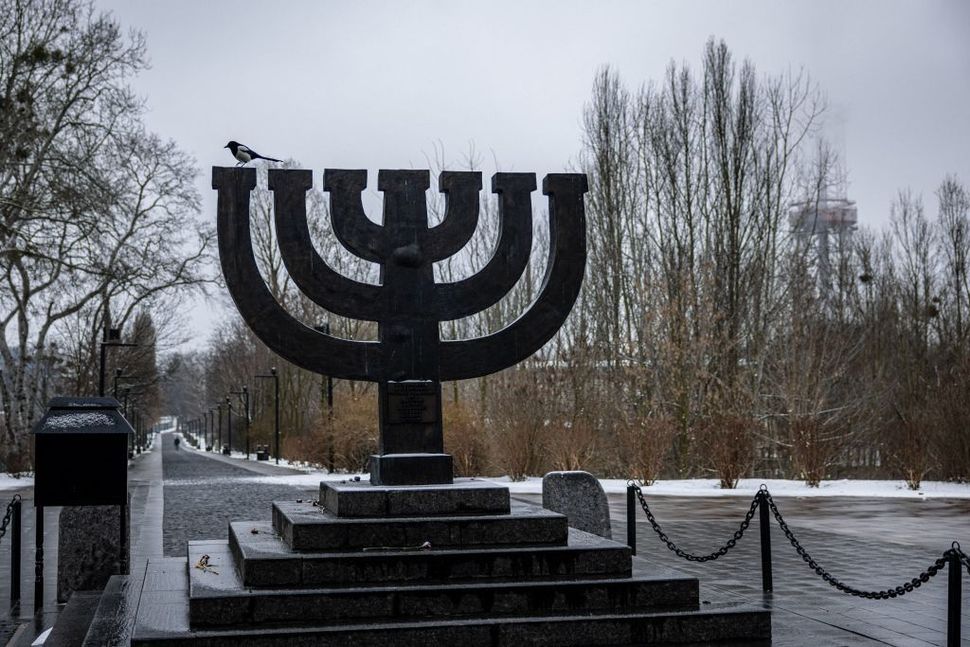 A view of the Babyn Yar Holocaust Memorial Center in Kyiv on March 2, 2022. Photo by DIMITAR DILKOFF/AFP via Getty Images

The Russian missile that hit Babyn Yar Tuesday damaged a Jewish cemetery and a Soviet-era sports complex but not a new synagogue or the “field of remembrance,” Natan Sharansky, chairman of the advisory board for the site’s memorial center, said in an interview Wednesday.

The field honors the more than 33,000 Jewish victims of a 1941 massacre at the site, which is close to Kyiv.

Tuesday’s attack, which targeted a broadcast tower, killed five people and prompted outrage in Ukraine and among Jews worldwide.

Ukrainian President Volodymyr Zelemskyy, who is Jewish, tweeted: “To the world: what is the point of saying «never again» for 80 years, if the world stays silent when a bomb drops on the same site of Babyn Yar? At least 5 killed. History repeating…”

Sharansky seemed to reject the idea, asserted by some on social media, that Russia had intentionally targeted Babyn Yar. “The bomb was of course targeting the radio tower,” Sharansky said, but came within 100 yards of the synagogue.

“Thank God it wasn’t hit, because it’s an absolutely unique synagogue, which got already international prizes for architecture. So thank God it’s not damaged,” he said.

When it became clear Wednesday that Babyn Yar had not sustained critical damage, many expressed relief.

“I am gratified it was not hit, but it would have been ironic if it had been,” said Michael Berenbaum, a scholar who served as deputy director of the President’s Commission on the Holocaust.

The irony of a Russian missile striking Babyn Yar, where tens of thousands of Jews were killed during the Holocaust, was noted by many given remarks Russian President Vladimir Putin made last week to justify the invasion of Ukraine — that the Russians had come to “denazify” the country.

On Wednesday the State Department’s top antisemitism official decried the missile attack so close to Babyn Yar and lambasted Putin’s assertion. “Putin’s claim that Ukraine is a hotbed of Nazism is a blatant fabrication and yet another of the false pretexts of his war, his war of choice,” said Aaron Keyak, deputy envoy to monitor and combat antisemitism.

The Babyn Yar Holocaust Memorial Center, with which Sharansky is affiliated, has big plans for the 140-acre site, including a museum, monuments and open space that would eventually “be the biggest memorial complex in the world,” he said.

The memorial center is still in the process of obtaining rights to parts of the property, including the sports complex that was damaged by the bomb.

“The building that was damaged was not yet rebuilt and part of the museum,” he said. “We were just now negotiating,” he added, to move the complex and turn it into the “Museum of Oblivion,” documenting Soviet and other attempts to erase Holocaust history. “It was just in the process of taking all the rights.”

Stewart Ain contributed to this story.

Most of Babyn Yar Holocaust site unscathed by Russian missile