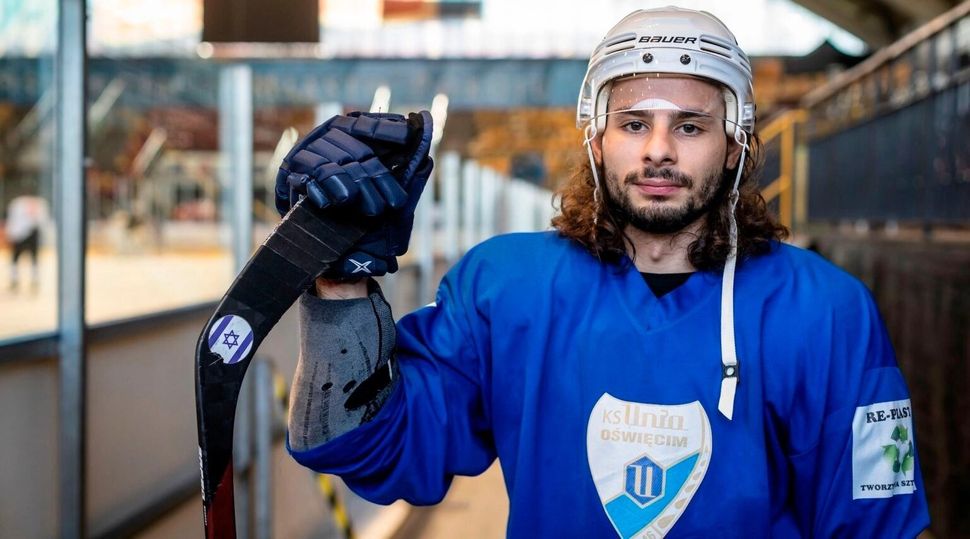 Eliezer Sherbatov played for a hockey team in Oswiecim, Poland in 2020. (WOJTEK RADWANSKI/AFP via Getty Images)

(JTA) — Israeli-Canadian hockey player Eliezer Sherbatov detailed his harrowing experience fleeing Ukraine as war broke out last week on Instagram and in an emotional interview with Canada’s The Sports Network.

Sherbatov, a longtime captain of Israel’s national hockey team, made headlines in 2020 when he joined a Polish team that plays in Oswiecim, or in English, Auschwitz. He has played for HC Mariupol in the Ukrainian Hockey League since last summer, and his team was staying in a hotel in Druzhkivka, Ukraine, when Russia’s invasion began Feb. 24.

Sherbatov spent the next five days traveling through Ukraine by train, ultimately reaching Lviv, where he connected with the Israeli consulate.

Sherbatov, who was born in Rehovot, Israel, joined a busload of refugees that crossed into Warsaw, Poland. The 30-year-old credits the Israeli consulate and volunteers with getting him out, calling them “amazing people, amazing organization.”

He was made de facto head of the bus, he told TSN.

Sherbatov made it home to Montreal on Tuesday — where his wife and two young children were waiting. He had not yet met his son, who was born while he was playing in Mariupol

He has teammates still stuck in Mariupol, which is under a Russian siege and heavy attack because of its strategic significance as a coastal city.