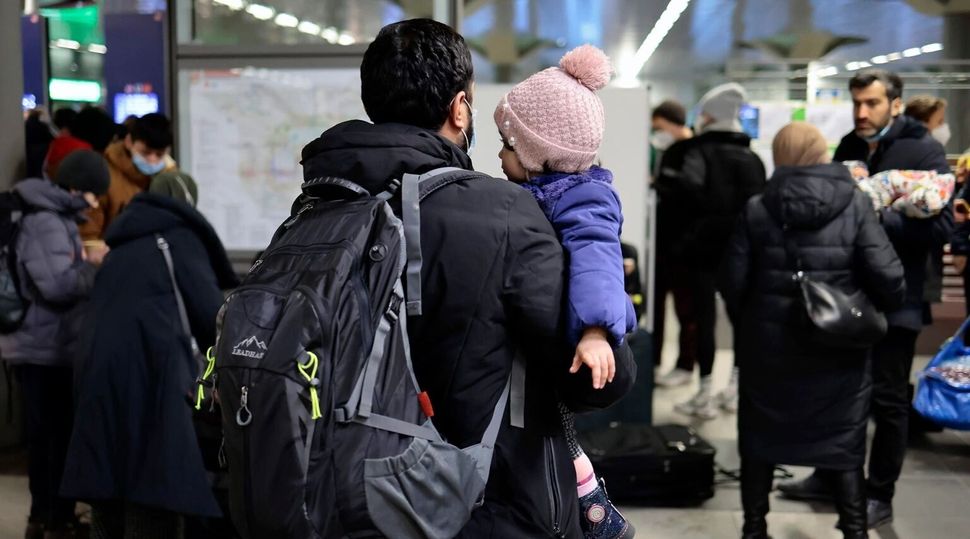 A man carries a child after refugees from the Ukraine arrive at the main train station in Berlin, March 1, 2022. in Berlin, Germany. (Hannibal Hanschke/Getty Images)

In a deal worked out with the federal government, refugees who have papers proving their Jewish roots will have an expedited path to German citizenship.

Jewish leaders welcomed the news even as they struggled to find shelter and support for refugees arriving after days of travel from the war zone.

“It’s a very fluid situation,” Berlin Rabbi Yehudah Teichtal told the Jewish Telegraphic Agency in a phone call. So far, he said, his community has helped settle some 250 people, including more than 100 children from an orphanage in Odessa. A third group is arriving today, he said.

“It’s very important that we have these new rules,” Teichtal added. “It is monumental that Germany — a country from which all the Jews were running away [in the 1930s] — is helping refugees in general and the Jewish community among them. It is very moving.”

Tens of thousands of Ukrainian refugees have flooded into Germany, mostly through Poland, since Russia began attacking its neighbor country on Feb. 24. Hundreds of Jewish refugees have been embraced by Jewish communities in the capital and other cities.

The formal application process for asylum for Jews is expected to be ready in the coming weeks. And local Jewish communities will assist with the process, which will be simplified, according to today’s announcement from the Central Council of Jews in Germany and its partner social services organization, the Central Welfare Council of Jews in Germany.

Any refugees from Ukraine are exempted from having to apply at the German Embassy in Kyiv, the Ukrainian capital that is the site of a fierce ongoing battle for control. Instead of having to prove language proficiency and employability immediately, they now have a year to meet these requirements.

In addition, it will not be an obstacle to citizenship if Ukrainian Jews have temporarily lived in another country, including Israel, since leaving Ukraine, the statement read in part.

Jewish applicants will have to submit original documents (including birth certificates) proving their Jewish origin. Application is also open to those with a Jewish father, and for non-Jewish spouses or other immediate family. Those who are accepted will be able to find a job and live anywhere in Germany. The usual quota distributions by state have been suspended for Jewish immigrants from Ukraine.

Rabbi Natalia Verzhbovska, who begins her post as spiritual leader at the Jewish community in Bielefeld, Germany, on April 1, already has helped find homes for 13 Jewish families in her city in the state of North-Rhine Westphalia. Verzhbovska herself emigrated to Germany in 2008 from Kyiv, to study at the liberal rabbinical school, Abraham Geiger Kolleg, in Potsdam.

“Many people are offering a place for them for two weeks, or a few days,” she told JTA, “but I am thinking about these poor people who have been changing flats so many times” on their way from Ukraine. “They need a place to stay for a long time, where they can feel safe.”

A few apartments were available to refugees who brought papers showing they are Jewish, and who are committed to joining the congregation, she added.

Membership in Jewish communities will not be as easy as the asylum procedure itself. At this point, Jewish communities under the umbrella of the Central Council — from Orthodox to Conservative to Progressive — offer membership only to those who have a Jewish mother or who have completed conversion to Judaism. Family members are welcome to participate in programs.

The postwar Jewish population in Germany soared from 30,000 to about 200,000 through Jewish immigration from the former Soviet Union after 1990, but not all were eligible to join formal communities. Today, there are about 100,000 members of Jewish communities across the country.