This Purim, Jews in NYC are ready to party like it’s 2019 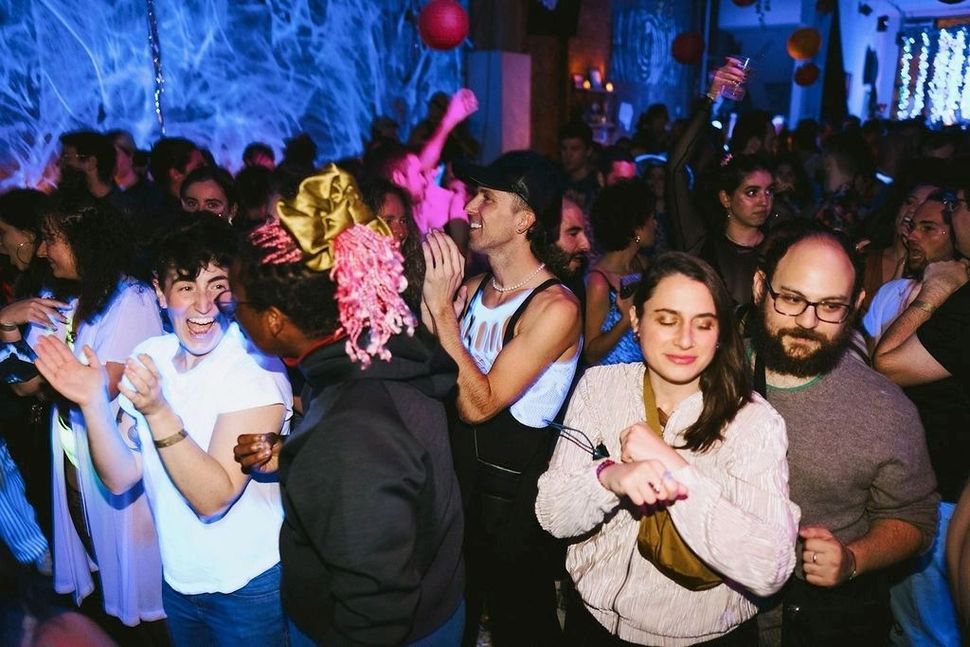 (New York Jewish Week via JTA) — After two years of Covid restrictions, Jews across the city are preparing for crowded Purim events, ranging from synagogue services and rock shows to queer Megillah readings and dance parties.

While Purim is traditionally celebrated inside of a synagogue, the holiday — with its themes of masquerade and merry-making — has been embraced by alternative Jewish groups, from political progressives to LGBT Jews. With pandemic restrictions lifting, Purim 2022 is shaping up as a day to mark a new beginning for many Jewish party-goers.

“For a lot of us, Purim [2020] was the last time we did anything,” said Sarah Chandler, who will perform at a Purim Carnival Reunion hosted by the rock band The Sway Machinery. “It’s important to me that we party on Purim, and more important to me, that woven into that is the key symbols of the holiday, the core story, and how we take that message into our lives.”

The party, at Nublu on Avenue A in the East Village, will feature  a theatrical reading of the Megillah, or Book of Esther, led by Chander, followed by a funk-inspired performance by The Sway Machinery.

Purim celebrates the story of Queen Esther saving the Jews from the hateful Haman. Traditionally, people are encouraged to wear costumes and drink to mild excess. That has been a cue for raucous nights of drinking and partying, full of costumes, music and creative interpretations of the Megillah text.

Chandler said that it is important for secular venues to host a Jewish party because there are some Jews who may not feel comfortable going to a synagogue. “Maybe they don’t feel like they are religious enough for a synagogue,” she said. “But the idea of a Purim party with a DJ, with a band, with other Jews, serving hamantaschen at the bar, that’s really compelling.”

She added that the city needs hundreds of Purim parties because “it’s finally safe to go out dancing and hear live music together in crowds again.”

Another such party is Purim in Color at Nebula on West 41st St., hosted by Jeff Kashi, the founder of the Jewish-themed event company J-Vibe. The evite promises 900-plus people and “NYC’s Best Young Professionals Crowd.”

“I think the big Jewish holidays are the only time of the year where you get to enjoy a Jewish party with 1,000 people in the room,” Kashi said. “And this is one of those parties.”

Kashi grew up in an Orthodox community in Queens, but said his parties are open to every type of Jew. “It’s targeted toward everyone,” Kashi said. “You’re going to get more Orthodox, some more modern, and the same goes for nationality: some Israeli, some Americans, a little bit of everything.”

He said this year is special because many Jews have not had the opportunity to go out and party for such a long time.

“We’re almost starting from scratch,” he said. “We’re missing a couple years. There will be a new crowd, so I’m sure it will be bigger than ever.”

Kashi started promoting parties in Miami during the pandemic, due to Florida’s more relaxed restrictions, and will also be hosting a Purim party there this year as well.

“New York is so much bigger for us,” Kashi said. “But we branched out to Miami because we have friends and family there, people who want the same type of event that we have here.”

Esther’s story — about a Jew who hides her real identity before becoming a hero to her people — resonates with many queer Jews, who feel it parallels their own stories of coming out. “Purim has always been a really queer holiday, ” Mordechai Levovitz, co-founder and clinical director of Jewish Queer Youth (JQY), told The New York Jewish Week.

“The whole thing is a coming out story,” he said. “Esther saves the Jews by coming out. Queen Vashti” — a character banished in the story because she refuses to dance in front of the king’s guests — “refuses to be objectified by the male gaze. We can celebrate this for ourselves with our own queer values.”

JQY, along with the Marlene Meyerson JCC Manhattan, is hosting an “immersive” Purim experience on March 16, featuring a “queer communal” Megillah reading at House of X in Manhattan, an offshoot of the famous Brooklyn nightclub House of Yes.

Levovitz said the space at House Of X, on the Lower East Side, looks like a queen’s private party, which is why the party is called The Vashti Ball. The party, to be March 16, will be an immersive “Sleep No More”-style experience, with cocktails, food, dancing, a runway show and more.

Purim is around the corner! Let’s get the party started! ???https://t.co/haTetUM9DZ pic.twitter.com/RBBBuUzKuU

JQY and the JCC starting doing these Purim parties 15 years ago to cater to the queer Jewish community, but Levovitz said it has grown to provide room for all types of people. “We have a theatrical Megillah reading with drag queens and modern dancers,” he said. “But we also have a traditional men’s-only Orthodox reading.  This is definitely the first time there will be a queer Orthodox Megillah reading in a nightclub.”

Stuart B. Meyers is the artistic director for The Vashti Ball, but he is also co-hosting another queer party with Aidan Orly called Queens, which is a Purim-themed dance party on March 19 at The Deep End in Brooklyn.

“We’re especially invested in uplifting the intersectionality between the queer person and the Jewish person and having those all come together on the dance floor,” Meyers said.

Meyers, who previously toured his own queer-themed Shabbat show, said he started throwing these parties because when he grew up as a gay Jewish man there wasn’t a space for those identities to come together.

“I didn’t see any events or communities where that was happening in a deep or creative way,” he said. “We want to open space for people, however they identify, extremely Jewish to barely Jewish, that they have a safe place to express their queerness as a Jewish person amongst Jewish people.”

Even political groups like the liberal Jews For Racial & Economic Justice are holding non-traditional Purim events pegged to the two-year anniversary of Covid and how Purim relates to all that is going on in the world.

On March 20, JFREJ is hosting an event called Emergency Purim, which will be held outdoors (weather permitting) on the steps of the Brooklyn Library. It will also be livestreamed for anyone who isn’t able to attend.

A “Purim Medic” will lead people through dancing, a parade, with make-your-own costume bags sent out so people can prepare for the festivities.

Jenny Romaine, a JFREJ member who has decades of experience putting on massive Purim theatricals known as “spiels,” said there is an emphasis on joy and taking care of each other.

“We have to have each other’s backs,” she said. “Covid is not over. This deeply honors that. Every step of the way, we were thinking about that.”

Romaine added that participants will carry a flag with a decree on it, similar to how King Ahaseurus in the Purim story sends out decrees to his kingdom.

“You write your own,” she said. “It will be expressing what they think is important right now. People will be looking at each other’s decrees, and then there will be a dance party.”

JFREJ’s director of strategic communications, Sophie Ellman-Golan, said the event will encourage people to work through the crises facing the world and get through it all together.

“What do you do at the end of the world?” Ellman-Golan asked.“The Purim story is about finding ludicrousness in the face of crisis. When the world is upside down, we’ll turn upside down as well, but we’ll do it with creativity, with art and with ritual and with love for each other.”

—
The post This Purim, Jews in NYC are ready to party like it’s 2019 appeared first on Jewish Telegraphic Agency.

This Purim, Jews in NYC are ready to party like it’s 2019