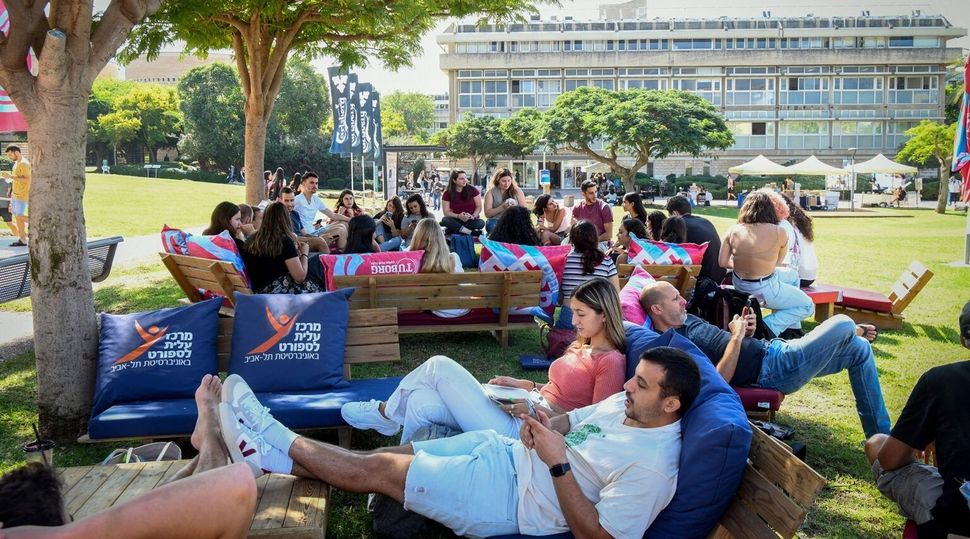 Students at Tel Aviv University on the first day of the new academic year, October 10, 2021. A new vote by the Middle East Studies Association plans to endorse a boycott of Israeli universities in accordance with the BDS movement, but not of individual Israeli scholars. (Flash90)

(JTA) – An academic professional organization devoted to international study of the Arab world and Israel has voted to endorse boycotting Israel, in a resolution signed by thousands of professors and scholars worldwide.

Members of the Middle East Studies Association signed off on a resolution “endorsing the Palestinian call for solidarity in the form of boycotts, divestment and sanctions,” known as BDS.

The resolution also calls for an “academic boycott” of Israeli institutions, including universities — a term that BDS proponents typically define as severing all formal ties with the institutions. But the association says it will not target individual students or scholars, that Israeli scholars will still be eligible for membership, and that each individual member of the group has the right to refrain from participating in the boycott.

“Our members have cast a clear vote to answer the call for solidarity from Palestinian scholars and students experiencing violations of their right to education and other human rights,” the group’s president, Eve Troutt Powell, said in a statement. “MESA’s Board will work to honor the will of its members and ensure that the call for an academic boycott is upheld without undermining our commitment to the free exchange of ideas and scholarship.”

Of those voting on the resolution, 80% backed it, according to the group. Now, the group’s board of directors are tasked with finding ways to “give effect to the spirit and intent of this resolution,” the resolution says.

Powell did not respond to a Jewish Telegraphic Agency request for comment.

The vote makes MESA the latest group of academics to approve a BDS resolution, and likely the one whose membership is most knowledgeable about Israel and the Middle East. Other academic organizations that have also endorsed part or all of BDS include the American Anthropological Association, the Modern Languages Association and the American Studies Association.

Those resolutions have not led to widespread effects for Israeli scholars or universities. But the votes are symbolically significant amid debate over how Israel is discussed on college campuses.

Critics say such resolutions from academic groups encourage campus antisemitism, or are themselves antisemitic in nature because they single out Israel for censure. The AMCHA Initiative, a pro-Israel campus advocacy group, timed the release of an in-house study to the vote, claiming that professors who supported BDS were more likely to foster antisemitic climates on campus. After the results of the vote were revealed, AMCHA issued a statement calling it “morally reprehensible and incredibly dangerous.”

But MESA says its resolution is all about academic freedom and dialogue, including the freedom of Israeli academics to criticize their country without fear of reprisal. Israeli academics who publish research or advocacy highly critical of their government have at times been met with fierce backlash, including effectively being blacklisted from academic jobs, in Israeli society.

The group has more than 2,800 members from all over the world, including 33 in Israel, though the highest concentration are in the United States. It also has a long list of institutional members, including departments at universities such as Brandeis and Columbia.

Its mission statement includes Israel under a list of Middle East and North African countries its members’ studies are “primarily concerned with,” and also states that the group opposes antisemitism. Some members are Jewish studies or Israel studies professors.

Ian Lustick, founder and past president of the Association for Israel Studies, is one Jewish MESA member who voted for the BDS resolution. He wrote in an op-ed for Mondoweiss, a website highly critical of Israel, that he supported the resolution “because it is flexible and respects the moral posture and complex circumstances affecting those whose support is solicited,” adding that he himself has no intention of cutting ties with Israeli universities.

A rival academic group, the Association for the Study of the Middle East and Africa, was formed in 2007 due to what its founders said was persistent anti-Israel bias at MESA. Its president, Asaf Romirowsky, issued harsh criticism of MESA’s BDS vote ahead of the final results, saying that the group is “clearly a politicized advocacy organization.”