Antony Blinken often cites his family’s Holocaust history. The Russia-Ukraine war has him stuck between the personal and the political. 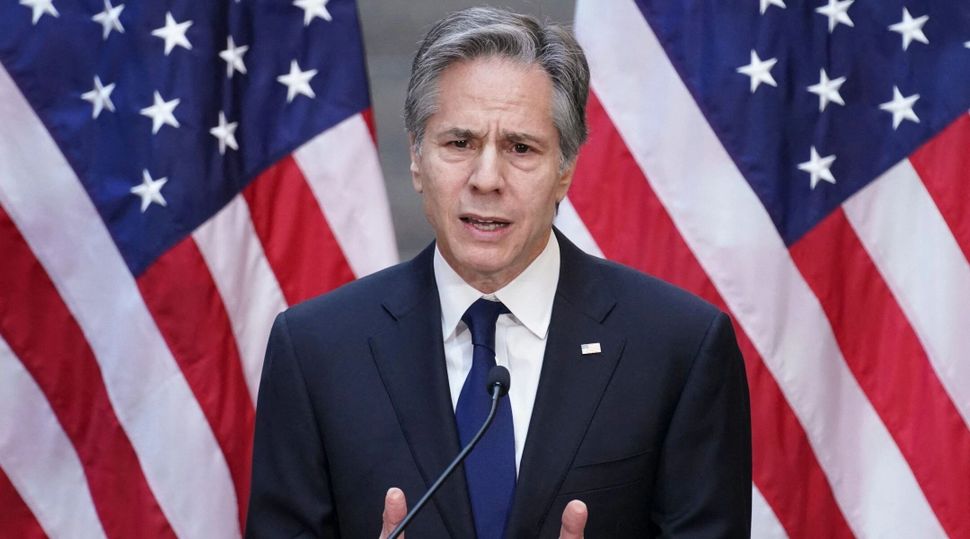 A speech at the U.S. Holocaust museum shows that the Jewish secretary of state is feeling a World War II level of urgency.

WASHINGTON (JTA) — When Secretary of State Antony Blinken cited his family’s Holocaust-era history in explaining a matter of U.S. foreign policy on Monday, it was far from the first time he has done so.

“One of my responsibilities as Secretary is determining, on behalf of the United States, whether atrocities have been committed,” Blinken, who is Jewish, said Monday at the U.S. Holocaust Memorial Museum, where he announced that the Biden administration had determined that the Burmese military had committed genocide against the Rohingya. “It’s an immense responsibility that I take very seriously, particularly given my family’s history.”

That family history involves his stepfather, Samuel Pisar, the Holocaust survivor who became a renowned legal scholar and philosopher. Blinken has often described the late Pisar’s recounting of his rescue by American soldiers, saying it shaped his own idea of what the United States symbolizes around the world.

“That’s the story that I grew up with, about what our country is and what it represents, and what it means when the United States is engaged and leading,” Blinken has said in the past.

Now America’s top diplomat is contending with a conflict that is putting these values to the test: Russia’s invasion of Ukraine, which has involved mass killings of civilians.

He is also dealing with appeals from Ukraine’s Jewish president, Volodymyr Zelensky — who similarly cites the Holocaust as shaping his outlook — to do more to stop Russia’s attacks.

Zelensky has additionally made direct comparisons between the Russian onslaught and the Holocaust, while Russian President Vladimir Putin has stated his goal is to “de-Nazify” Ukraine.

Talking to American Jewish leaders, Zelensky called Putin’s actions “pure Nazism;” talking to Israelis, he likened Russian tactics to the “final solution”; and in his address to the U.S. Congress, he called the Russian invasion “the worst war since World War II.”

The Biden administration has imposed crippling sanctions on Russia and is funneling billions of dollars in defense and humanitarian assistance to Ukraine, in addition to deploying U.S. troops to NATO allies adjacent to Ukraine. But President Joe Biden will not accede to Zelensky’s top demands — including creating a no-fly zone over Ukraine to protect it — saying they could provoke a world war.’

On Wednesday, however, Blinken formally declared that the United States’ position is that Russian forces have committed war crimes.

“Many of the sites Russia’s forces have hit have been clearly identifiable as in-use by civilians,” he said in a statement. “This includes the Mariupol maternity hospital, as the UN Office of the High Commissioner for Human Rights expressly noted in a March 11 report. It also includes a strike that hit a Mariupol theater, clearly marked with the word ‘дети’ — Russian for ‘children’ — in huge letters visible from the sky.”

Does Blinken feel the pressures of family history as he contemplates Ukraine? The State Department did not respond to multiple requests for an interview. But his speech at the Holocaust musuem on Monday showed that it was on his mind.

“One of the unsettling truths of the United States Holocaust Memorial Museum is that there’s never a time I visit here when its lessons do not feel deeply resonant,” he said. “But I have to tell you, I can recall few times when that history felt so urgent, or the responsibility it imparts on all of us so pressing. As we meet, the Russian Government continues to wage its unprovoked, brutal war on Ukraine. Each day brings more harrowing attacks, more innocent men, women, and children killed.”

The risk the war posed to Holocaust survivors in Ukraine was especially poignant in Blinken’s telling.

“Ukraine is home to nearly 10,000 Holocaust survivors, including an 88-year-old woman, Natalia Berezhnaya of Odessa,” he said. “Here’s what she said in a recent interview, and I quote: ‘It’s hard to wrap my mind around the fact that in 1941, I had to hide in the basement of this building, and that I’m going to have to do that again now.’”

Blinken stopped short of accusing Putin of genocide as he did the Burmese military. Instead, he cast Russia’s predations as part of a welter of human rights disasters now proliferating.

“Even as we are working to increase international pressure on the Kremlin to end this unjustified war, we know there are many other places in the world where horrific atrocities are being committed,” Blinken said. “Over recent weeks, as I’ve spoken with diplomats from around the world about Ukraine, I’ve also heard a constant refrain.  Many of them say, ‘Yes, we stand with the people of Ukraine.  But we must also stand with the people suffering atrocities in other places.’”

The move to accuse Russia of war crimes on Wednesday is notable; noted Jewish foreign policy experts had been frustrated with Blinken’s language.

Josh Rogin, an influential foreign policy opinion columnist for The Washington Post, wrote that the hesitancy in Ukraine is reflective of a West that has allowed atrocities to be committed in China, Syria, and Burma. “The Ukraine example shows that ignoring atrocities anywhere is both morally and strategically bankrupt,” he said this week, before Blinken announced his war crimes designation.

Aaron David Miller, a longtime Middle East peace negotiator and a scion of one of Cleveland’s most prominent Jewish families, sounded a despairing note on Twitter.

“Never Again is Ever Ever Again,” he said. “The International Community has failed to even try to prevent any of the planet’s genocides/mass killings over past 100 years; Armenians; Holocaust; Cambodia; Rwanda; Congo; Sudan; Darfur; Myanmar; Uighurs; Syria….. Ever ask yourself why.”

Asked to expand on the tweet on CNN, Miller, now a senior fellow at the Carnegie Endowment, a foreign policy think tank, admitted that he understood Blinken’s predicament.

“A president of the United States weighing the consequences of humanitarian intervention in the case of Ukraine has more than just moral factors to take into account and the consequences of an intervention or not an intervention at least for American interests, that could affect millions of humans in the United State and in Ukraine, so it’s it’s a moral hazard,” Miller said. “It’s an extremely difficult problem. And frankly, I think Ukraine is going to be another example of confirmation of the rule.”

Abe Foxman, the retired national director of the Anti-Defamation League and himself a Holocaust survivor, argued that Blinken’s approach made sense: One’s views on the Holocaust may shape policy but should not necessarily determine what the policy is.

“I’m pleased to see Blinken knows, understands, is informed and instructed by his family history, by his Jewish experience,” Foxman said in an interview. “It does make a difference, but it cannot be determinative of action. This is a war. It’s not a holocaust or genocide. And it’s very, very important that if you know your history, then you know the difference.”

—
The post Antony Blinken often cites his family’s Holocaust history. The Russia-Ukraine war has him stuck between the personal and the political. appeared first on Jewish Telegraphic Agency.

Antony Blinken often cites his family’s Holocaust history. The Russia-Ukraine war has him stuck between the personal and the political.