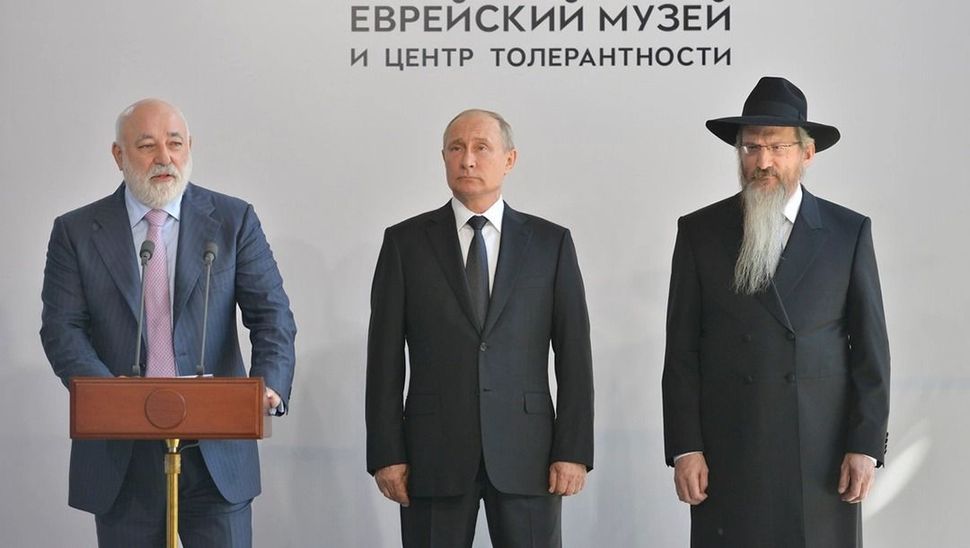 “Stop the war!” Rabbi Boruch Gorin wrote on Facebook. He added, “This could cause fits of rage, but I have no other words now.”

It was not just the use of the word “war,” which Russia later banned from public discourse, that made the comment so remarkable. It was also because Gorin is a senior spokesperson for the Chabad-affiliated Federation of Jewish Communities in Russia and to Russian Chief Rabbi Berel Lazar — a Chabad rabbi whose ties to Russia’s bellicose president has earned him the derisive moniker “Putin’s rabbi.”

During Vladimir Putin’s 22 years in power, the Russian president has maintained a simple but effective relationship with the Chabad-affiliated rabbis of his country.

Under this symbiotic relationship, Putin helped Chabad pull off one of the most impressive Jewish revivals in modern times, eclipsing all their rival groups in Russia to bring Jewish practice and experiences to people who had little access to religious life under communism. Chabad’s star especially rose as Putin’s relations soured with the Russian Jewish Congress, a non-Chabad communal group.

Chabad, in turn, continued to abide by the Hasidic Orthodox movement’s willingness to work with government regimes as long as they don’t target Jews — a propensity that Chabad leaders define as partisan neutrality and that critics say reflects an inappropriate deference to power.

Russia’s Feb. 24 invasion of Ukraine has placed unprecedented strain on this arrangement, threatening what many view as a golden age of Russian Jewry and possibly Chabad’s place alongside Christian and Muslim counterparts operating under similar understandings with Putin.

In the weeks since the start of the war, Chabad in Russia has drawn criticism from abroad for failing to condemn a war that has caused untold death and turned millions of Ukrainians, including tens of thousands of Jews, into refugees. Meanwhile, Russian nationalists are criticizing the group, often in antisemitic terms, for not adequately backing Putin.

For Chabad, the push and pull is taking place amid an emotionally fraught conflict — Ukraine is in many ways the spiritual birthplace of the movement — and with many of its deep-pocketed Russian backers suddenly without access to their wealth because of international sanctions.

The dynamics have Chabad of Russia engaged in a delicate balancing act aimed at maintaining safety and access to Jewish life for the country’s roughly 200,000 Jews.

“It’s a complicated situation. During times of war, people are not thinking rationally. Some think: You’re either with us or against us. We explain that bringing peace is the basis for any religious community, especially the Jewish one,” said Rabbi Alexander Boroda, president of the Federation of Jewish Communities in Russia. “But I can’t say everyone understands. Some people from other faiths — they expect us to support the military action.”

Gorin’s comments represented an early example of Chabad’s balancing act. Occurring amid rising nationalist sentiment and a witch hunt for so-called traitors, his call to end the war stood out as unusual in Russia.

Gorin told the Jewish Telegraphic Agency at the time that his position nonetheless represented that of Lazar and the rest of the Federation of Jewish Communities, a group with dozens of synagogues and community centers and hundreds of rabbis across Russia’s vast territory.

And on March 2, Lazar himself wrote a statement calling to “stop the madness so that no more people die.”

Lazar’s language was milder than Gorin’s, and certainly than the language used by some Jewish leaders abroad — such as the rabbis from the Union for Reform Judaism who in a statement condemned what they termed “Putin’s seemingly insatiable desire to fulfill his vision of a new Russian empire.” But it nonetheless set Lazar apart from other clergy in Russia, who are cheering on the Russian invasion and justifying it.

The views expressed — and not expressed — by Chabad’s leadership in Russia have drawn the attention of “other faith representatives” to the Federation of Jewish Communities of Russia, Boroda said. He declined to specify who those representatives were.

Multiple sources told Haaretz this week that the Kremlin is pressuring Jewish groups in Russia to support the war, including by threatening to shut down Jewish institutions if they do not. But Boroda said his group had not been pressured by the government to support the war, which in Russia is referred to as a “special military operation” by Putin’s fiat.

Still, he said, Chabad nonetheless had faced questions about its stance. “There are representatives from other faiths who want to come out with something general to support the military operation,” Boroda said. “We declined and there was more or less understanding to our position. We weren’t pressured and told we have no choice and had to pick sides here.”

Boroda drew criticism from abroad, including from a leading Chabad rabbi in Ukraine, after he spoke with the Interfax Russian news agency about the war in early March and the Jerusalem Post reported the contents of the interview.

In the interview, Boroda was asked about the Ukrainian state’s track record of celebrating the legacies of Nazi collaborators. Boroda condemned these activities, reiterating the position of his own group and many others, including the State of Israel and the World Jewish Congress. He also invoked the Holocaust while decrying vandalism of a Russian store in Germany, noting that Kristallnacht, the pogrom that is considered to be the beginning of the Nazi Holocaust against the Jews, featured vandalism of stores.

The Jerusalem Post interpreted Boroda’s answers as support for the “denazification” pretext offered by Putin himself for the invasion.

Boroda rejected that interpretation, noting that he did not link the glorification of Nazi collaborators with the current situation in Ukraine. He also did not comment directly on the war.

Even within Russia, some would like to see Chabad in Russia take a firmer position against the war.

“They made a bunch of vague statements for peace, [but] they haven’t really said what Russian Jews really think about this terrible war and the dictatorship responsible for it,” said one Jewish person in Russia who for years has followed Chabad and Jewish community politics. The source, who said they were already taking a risk just speaking a Western journalist over the phone, spoke on condition of anonymity for fear of being imprisoned under new laws proscribing criticism of the war.

Putin has made clear his intolerance for criticism over the war beyond enacting laws punishing those who criticize it. In a speech on March 17, he said: “The Russian people will always be able to distinguish true patriots from scum and traitors and will simply spit them out like an insect in their mouth onto the pavement.”

Not long after that, a pig’s head with a blond wig was placed outside the home of a Russian-Jewish journalist deemed critical of the war. The perpetrators posted a piece of paper on the door of the apartment of the journalist, Alexey Venediktov, which featured a Ukrainian national symbol and the word “Judensau,” the German-language term for an antisemitic icon from the Middle Ages.

Statements like Gorin’s and Chabad’s humanitarian efforts in Ukraine have not gone unnoticed in ultranationalist circles.

The criticism comes amid increasing pressure on Chabad’s finances in Russia. Ever since the collapse of the former Soviet Union, Chabad of Russia has relied on a mix of donations from Russian philanthropists, including the billionaires known as oligarchs whose wealth accumulated through relationships with the state, plus government assistance and gifts from Western donors.

With those sources of funding, Chabad of Russia has built an array of buildings and institutions, including dozens of schools and ostentatious synagogues like the one headed by Boroda in Zhukovka, a wealthy suburb of Moscow. Chabad is opening synagogues and centers far beyond the capital, including in Arkhangelsk, home to the world’s northernmost Jewish community center, and in Tomsk, where Siberia’s largest Jewish community center recently opened.

The group was also instrumental in the development and construction of the $50 million Jewish Museum and Tolerance Center, which opened in Moscow in 2012 and was built with the support of the Russian government.

But now, many of the Russian-Jewish oligarchs who used to fund Chabad activities in Russia are under crippling sanctions that have tied up their funds in the West. That could make support from outside Russia more essential, according to Roman Bronfman, an Israeli former lawmaker who was born in Ukraine and is the author of a book on Russian-speaking Jewry.

“Chabad in Russia is between a rock and a hard place,” Bronfman said. “Especially now they need to work on their ties to the west, which are substantial anyway. They need to take public opinion in the west into account.”

Russian Jews, including the ones belonging to Chabad, “almost all have their origins in Ukraine, Moldova or Belarus,” Bronfman noted. This is because those countries were part of the Pale of Settlement, where Jews were allowed to live during Czarist times.

“Very few Russian Jews actually come from Russia. This means the invasion into Ukraine hit an emotional chord, preventing Chabad from siding all the way with Russian clergy supporting the war,” Bronfman said.

To Bronfman, what is happening in Russia right now represents “the collapse of the model on which Chabad has operated so far in Russia, in which they stay out of politics in exchange for government support.” This model, he said, restricts criticism by Chabad of the government but “is preconditioned on the freedom not to openly support the government and cheer it on, either. The war has drastically reduced this freedom.”

Misha Kapustin, a Reform rabbi who fled Crimea to Slovakia in 2014 after the Russian army annexed that part of Ukraine, also believes that Chabad of Russia has not spoken out against the war in any significant way.

Moral fortitude requires clergy to speak out against the war in Ukraine, he said. But he said he understands why Russian Chabad rabbis have not done this with more force.

“It’s easy for us to criticize but Russia is a dictatorship,” said Kapustin, who has previously criticized Chabad of Russia for being too close to the government. “So what should they do? Walk away from the communities they build? Abandon Jews there?”

Russia’s Chabad rabbis, Kapustin said, are “facing a very difficult choice.” It’s one that he doesn’t need to imagine making, because he made it already.

“I left Crimea precisely because I didn’t want to put myself in that position,” Kapustin said.

Chabad’s rabbis in Russia may not have that flexibility. Emissaries in the movement are expected to remain in their communities through thick and thin; many who left Ukraine in the war’s early days to usher their families and communities to safety have returned already.

And whatever happens with the war and with Putin’s leadership, there are potentially hundreds of thousands of Jews in Russia. While thousands of Russian Jews have departed for Israel and beyond since the war broke out, many of them fearing a return of the Iron Curtain, most have stayed.

Many of those who left “did so out of an initial reaction of panic,” Boroda said. He added, “They will return. It will not affect the revival of Jewish life in Russia, which we will continue to bring to new heights regardless of international politics.”

—
The post Ukraine invasion puts Chabad of Russia ‘between a rock and a hard place’ appeared first on Jewish Telegraphic Agency.