Estelle Harris, actress who played George’s mother on ‘Seinfeld,’ has died at 93 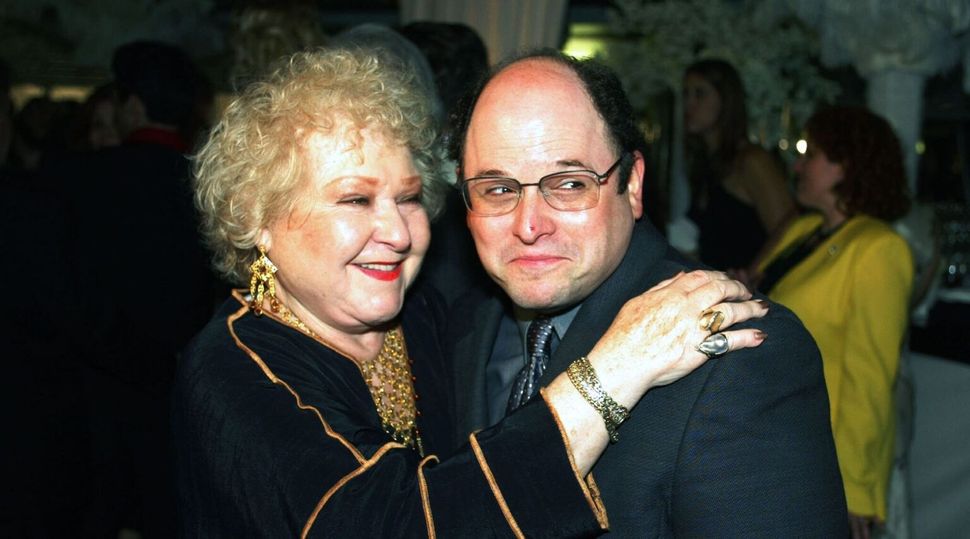 Estelle Harris and Jason Alexander greet each other at the after-party for “The Producers” at the Hollywood Palladium, May 29, 2003 in Los Angeles. (Kevin Winter/Getty Images)

(JTA) — Estelle Harris, the actress who played George Costanza’s mother on the sitcom “Seinfeld,” died Saturday at the age of 93.

Harris played the role of Estelle Costanza, the always shrill and frequently apoplectic mother to George Costanza, on the sitcom from 1992 until the show’s finale in 1998. According to Deadline, the character of George’s mother was named Estelle before Harris landed the part, but her name wasn’t the only thing Harris shared with her onscreen character.

“I’m not that different from Estelle Costanza,” Harris told the Chicago Tribune in 1995, at the height of her Seinfeld fame. “I understand her frustrations. She needs to break away from her husband. She would be much happier doing her own thing. She doesn’t need therapy. She needs more love from George and her husband. Then she’d be a perfectly delightful and delighted human being.”

Harris was born in New York City in 1928 where her parents, Jews of Polish descent, owned a candy store in Manhattan. When Harris was 7 years old, the family moved to Tarentum, Pennsylvania where Harris suffered from antisemitic bullying at school. She quickly to turning to the theater, aided by elocution lessons, and found her calling.

Before working as a professional actress, Harris married Sy Harris, a window blinds salesman, with whom she had three children. After staying at home when her children were young, she began her career working at dinner theaters in New York City in the 1970s.

Though Harris went on to a prolific career recording voiceovers for commercials and playing minor characters in movies and TV shows, she became so identified with her “Seinfeld” role that fans frequently stopped her on the street to tell her her she reminded them of their own mothers.

Jason Alexander, who played her character’s son George on “Seinfeld,” remembered his “tv mama” in a tweet Sunday.

“One of my favorite people has passed – my tv mama, Estelle Harris. The joy of playing with her and relishing her glorious laughter was a treat. I adore you, Estelle,” he wrote.

—
The post Estelle Harris, actress who played George’s mother on ‘Seinfeld,’ has died at 93 appeared first on Jewish Telegraphic Agency.

Estelle Harris, actress who played George’s mother on ‘Seinfeld,’ has died at 93