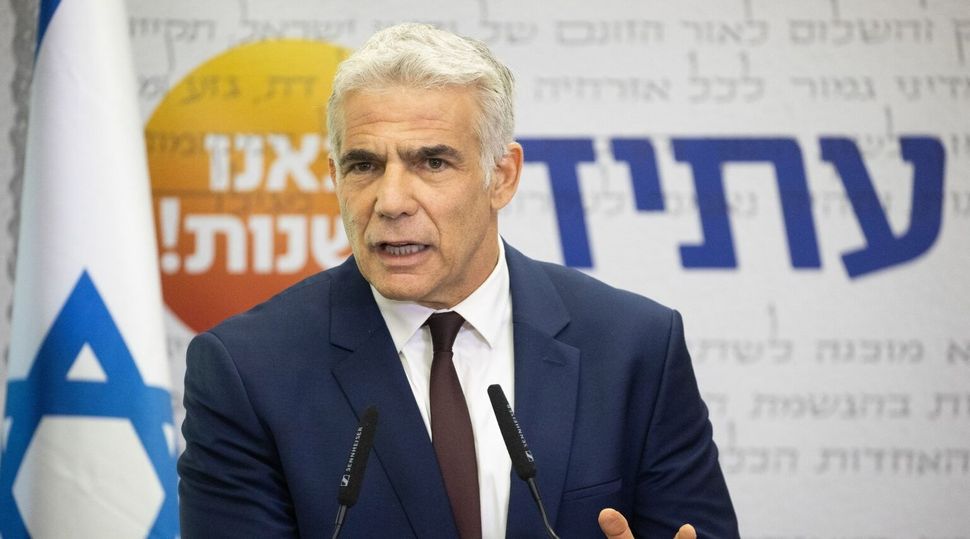 (JTA) — Israeli Foreign Minister Yair Lapid has joined an international chorus condemning what appears to be mass civilian casualties in areas of Ukraine where Russian troops are pulling out.

Lapid’s comments came hours after his ministry downplayed similar condemnation from Israel’s ambassador to Ukraine amid ongoing efforts by Israel to navigate a fine line in responding to Russia’s invasion of Ukraine.

“It is impossible to remain indifferent in the face of the horrific images from the city of Bucha near Kiev, from after the Russian army left,” Lapid tweeted Sunday evening. “Intentionally harming a civilian population is a war crime and I strongly condemn it.”

Lapid’s comment was in line with that of leaders from around the world who say that what happened in Bucha and other Ukrainian cities should be investigated as war crimes. Journalists have documented mass graves and corpses in streets, corroborating claims by Ukraine’s defense ministry that civilians had been executed in the suburbs of Kyiv where heavy fighting occurred since Russia invaded Ukraine Feb. 24.

Hours earlier, a spokesperson for Lapid’s ministry appeared to walk back a similar comment by Israel’s ambassador to Ukraine.

In a tweet Sunday morning, the ambassador, Michael Brodsky, said he was “deeply shocked” by the photos emerging from Bucha. “Killing of civilians is a war crime and cannot be justified,” he wrote.

The ministry spokesperson emphasized to Haaretz, the Israeli newspaper, that Brodsky did not lay specific blame or speak for the Israeli government.

“No. It’s a tweet by the ambassador regarding the photos. He didn’t blame Russia,” the spokesman said Sunday, according to Haaretz.

Throughout the war that began when Russia invaded Ukraine Feb. 24, Israel, which has strategic interests with Russia, has tried to maintain a degree of neutrality. That effort has sometimes been challenged by Ukrainian President Volodymyr Zelensky, who has pushed Israel to more forcefully condemn Russia’s invasion and has asked Israel for materiel, but has also positioned Israeli Prime Minister Naftali Bennett to play an influential role in advancing negotiations between the warring nations.

Within Israel’s government, Lapid has continually struck a more forceful tone against Russia than Bennett. Brodsky’s tweet appeared to favor Lapid’s approach and the ambassador posted a photo to Twitter showing his meeting with Lapid in Israel Sunday evening before returning to his post.

Russia’s government also appeared to criticize Brodsky’s tweet, with a spokesperson for Russia’s embassy in Israel suggesting to Haaretz — as it has widely — that the photos and videos emerging from the Kyiv suburbs were fake.

“To our regret, some officials, hopefully unintentionally, become hostages to such fakes and unverified information, the obvious purpose of which is to present a distorted picture of what is happening in Ukraine and around it, and to discredit Russia by all means,” the spokesperson told Haaretz.

Bennett has not commented publicly, including on social media, about the amassing evidence of possible military crimes against civilian Ukrainians in the suburbs of Kyiv.