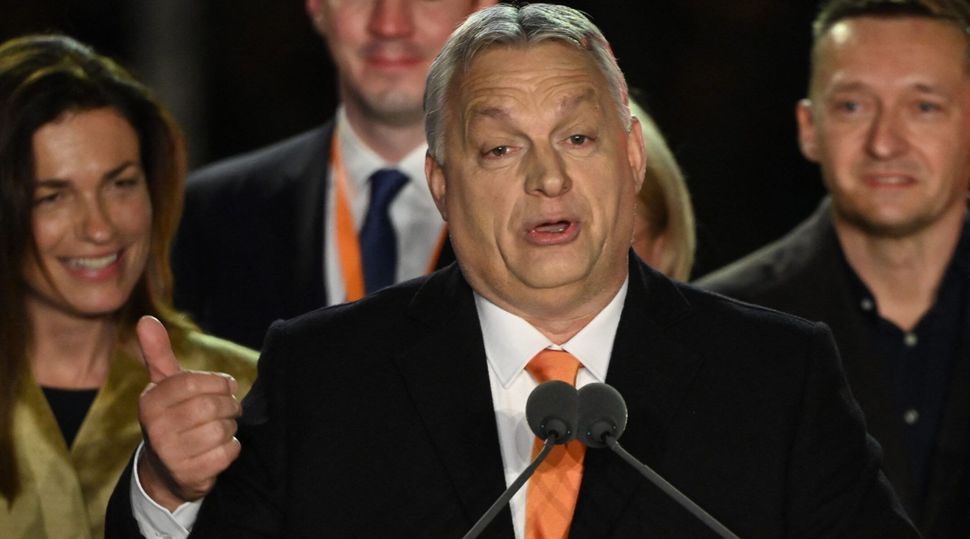 BUDAPEST, Hungary (JTA) – Hungary’s nationalist prime minister, Viktor Orban, has won a fourth term in office, dashing the hopes of a broad opposition alliance of unseating him after 12 years in power.

In his victory speech Sunday night, Orban said he had prevailed against a slew of perceived enemies: “the left at home, the international left all around, the Brussels bureaucrats, the Soros empire with all its money, the international mainstream media, and in the end, even the Ukrainian president.”

The speech drew immediate criticism for its use of antisemitic dog whistles as Orban declared victory for “Christian democratic politics” in Hungary, where he is the standard bearer for the autocratic right. Both George Soros, the Hungarian-American liberal billionaire, and Ukrainian President Volodymyr Zelensky are Jewish.

With 98% of the votes from Sunday’s general parliamentary elections counted, Orban’s Fidesz party won 53% percent of the vote, enjoying an 18-point lead on the runner up, United for Hungary.

Many Hungarian Jews had seen no obvious choice in the election, which had been projected to be the closest ever for Orban.

Headed by centrist Peter Marki-Zay, United for Hungary is an alliance seeking to replace Orban that comprises multiple parties espousing radically different ideologies such as the Socialist Party of Hungary and the Jobbik far-right party, which has a history of antisemitism and racism. Jobbik is the alliance partner with the largest number of seats in parliament.

Meanwhile, Orban has clashed publicly with the European Union, to which Hungary belongs, over key issues such as immigration — he has refused to let in asylum seekers from the Middle East — as well as the treatment of Hungary’s Roma minority. He has also been accused of inciting antisemitic sentiments, including in his 2017-2018 billboard campaign against Soros, who has funded liberal causes has included spending in Hungary.

Some critics saw the billboards, including one of Soros smiling, as employing antisemitic tropes. Others, including from the organized Jewish community of Hungary, dismissed the interpretation at the time.

Because Orban controls much of the press in Hungary and has overseen the revision of election laws that now favor him, Hungary’s elections are considered “free but not fair” by some international observers.

Still, his share of the vote is seen as a solid barometer of public opinion, suggesting that many Hungarians are satisfied with Orban’s positions, including when it comes to Russia’s war on Ukraine. Orban has declined to attenuate or sever economic ties with Russia as other European countries have done.

Zelensky has accused Hungary of not doing enough to punish Russia for its Feb. 24 invasion into Ukraine. He also implied that Orban is doing Russia’s bidding in the European Union.

“There can be no Russian branches in Europe that divide the EU from within, that are trying to help Russia make as much money as possible even now,” Zelensky said in a speech last week. “Everyone knows very well who in the European Union opposes humanity and common sense, and who does nothing at all to help establish peace in Ukraine. This must stop, and Europe must stop listening to the excuses of Budapest.”