Nearly 80 years ago, this Jewish singer hoped to be the next Judy Garland. At 95, she’s getting recognized. 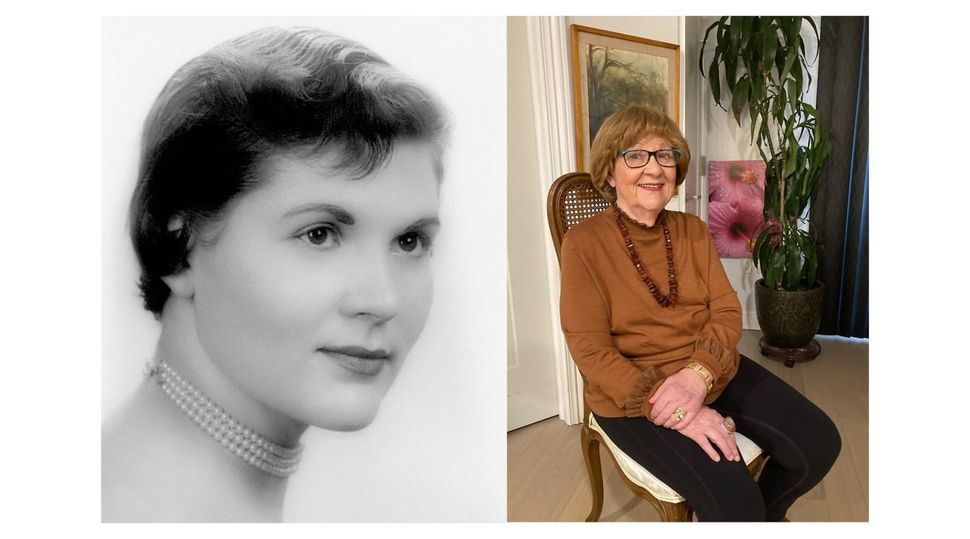 Collage of Madeline Forman. (Courtesy of the Forman family)

(JTA) — Madeline Millman was just 17 when she took centerstage at the Adams Theatre in downtown Newark, New Jersey, stepping into the same spotlight where the Andrews Sisters, Duke Ellington, Ella Fitzgerald and many of her other heroes had performed for sold-out houses.

And why not? Madeline had skipped school with friends to take part in a talent contest — and she won. The emcee, the Borscht Belt comic Joey Adams, stopped her on the way out to tell her she had a great voice and a real future. “After that, a couple people had their eye on me and wanted to help me with my career, and wanted me to make some records,” she said. In 1946, she recorded several popular songs onto 78s at a local studio: “Nobody’s Baby,” “Can’t Help Lovin’ That Man of Mine,” and a few others.

If the name “Madeline Forman,” as she is known today, doesn’t ring a bell, that is because life got in the way. The records went in a box, and Forman, now 95, “started doing whatever I had to do.” That meant working as a secretary to help support her Russian immigrant parents — her father, Simon Millman, sold bananas from a pushcart — and four siblings. The family lived in one of Newark’s first tenements — notable, she remembers, because it meant they had heat. But they had very little money and sometimes not enough food.

Close to 80 years later, and her voice is being heard again, this time by an audience that eluded her in her youth. In the middle of the COVID-19 pandemic, she and her husband, Joseph, discovered a dusty box in the home they had shared for more than 60 years in West Long Branch, New Jersey. It contained acetate records of jazz and pop standards, plus a couple of Yiddish melodies, that Forman had recorded more than seven decades ago, when she had the hope — and possibly the talent — to become the next Judy Garland.

“I looked at the label and flashed back to the day in the recording studio,” Forman, now 95, told the Jewish Telegraphic Agency. “It was a marvelous feeling, wonderful! If we hadn’t moved, I may never have seen them again.”

Now remastered and digitized, the songs have been lauded by industry experts and downloaded thousands of times around the world. And a story of an American Dream deferred has begun a brilliant new chapter, offering a window back into the American Jewish experience in the process.

Forman was born a singer. “If someone was listening, I sang to them. It was something that filled the time. We didn’t have that many toys, but we made our own good time. I loved it. I sang wherever I could. If there was a microphone, I got up and sang” — for family, for friends, for strangers at parties.

In 1953, at her wedding reception, she took to the stage to belt out Cole Porter’s “Begin the Beguine” and then the Yiddish standards “Oy! Mama” and “Sheyn Vi Di Devone.

“If a group of people were Jewish, I sang those songs,” Forman said. “My mother spoke Yiddish and she made sure that — hopefully — I pronounced everything correctly.”

An audiographer hired to log well wishes from guests got it all on record. Those discs were also among the rediscovered stack. Even with the chatter and clinking of dishes, Forman’s joy — and talent — is obvious.

On her honeymoon, at the popular Nevele resort in the Catskills, showbiz almost hooked her one more time. At the hotel’s open-mic night, she wowed the crowd. “The orchestra leader offered me the [full-time] job,” she remembers proudly. “I turned to the people — there were a couple thousand there — and I said, ‘You’re all witnesses!’ But I told him, ‘you’re too late — I just got married.’”

Forman has “zero regrets” about the path her life has taken since, a more understated version of the American Dream. She and Joe settled in the suburbs to raise Glenn and Adrienne. Instead of show business, she found herself running a shoe business, and eventually opened her own health-food restaurant, Madeline’s Slim Cuisine. (She blushed at being called an entrepreneur — “you said it,” she demurred.)

On Saturday nights at the restaurant, she hired a guitarist and bass player to back her, and she would kick off each set with a rendition of Henry Nemo’s 1941 standard “Don’t Take Your Love From Me” — every week for 10 years.

“I got a kick out of it,” she said. “It was a little extension of my career.”

But she never talked about what might have been. Until his mother called him excitedly in August 2020, Glenn, who became a physician, had no idea she had ever recorded a song, let alone aspired to more. Once he made the short drive to her new apartment, they borrowed a friend’s old turntable and played the delicate discs.

“I knew she liked to sing, but I had never heard her like this,” Glenn said. “I think she just tucked it away in her memory, and moved on with life. She has said to me that she was used to not getting what she dreamed about because times were difficult. So to her, [not pursuing a singing career] was just another example. But then, when she found the records, she started to tell the story.”

Glenn called a cousin, Howard Forman, a Montreal-based musician and producer who has worked with such artists as Celine Dion and been nominated for two Canadian Academy Awards.

“The first thing I said was, ‘Don’t ever play them again,’” Howard Forman said, noting that the needle could deteriorate or possibly destroy the acetate. Instead, he found an engineer in San Diego who specializes in digitizing obsolete media, and created a CD — Madeline’s first album, 75 years in the making. (The songs are now available on SoundCloud and MadelineForman.com.)

“The thing with Madeline’s stuff is that it was really good,” said Howard. “It wasn’t a joke. I could hear the licks she was stealing from popular singers of the day, and she was really pulling them off.

In particular, he admired her rendition of “Don’t Take Your Love From Me” — “it was kinda perfect,” he said. For fun, he played a ’40s-style guitar track and edited it into her original in his home studio. He only intended to send it back to Madeline and Glenn as a special treat, “a little collaboration across the generations,” but then he also posted it on social media.

The “avalanche” of comments — from other singers, songwriters, producers and engineers, including several Grammy and Oscar winners — “was astounding,” Howard said. Most commented not just on Madeline’s precise technique, but her natural affect.

“I smiled all day long,” she said. “There are a lot of nice people in this world.” She is pleased, too, that the Yiddish songs are getting attention by young Jewish people who never knew them.

“That’s your background,” she said. “That’s everything.”

In March 2021, Howard arranged a session for her at nearby Shorefire Recording Studios, whose client list includes Bruce Springsteen and Blondie’s Debbie Harry. Due to COVID protocols, Madeline sang “Don’t Take Your Love From Me” alone, with musicians playing remotely, becoming possibly the first artist to re-record the same song 75 years later — a feat not even Tony Bennett can match.

Her feel-good story spread. The New York Times profiled her; in the two days following, her version of “Don’t Take Your Love From Me” was downloaded almost 200,000 times. “The Today Show” came calling next.

With director Richard Mortimer, Howard Forman produced a seven-minute film that includes Madeline’s recent re-recording. He has since entered it in about 50 film festivals, from Sundance to Moscow, where it’s starting to get some notice.

Meanwhile, Madeline still sings every day, beginning by waking her husband to Irving Berlin’s “Oh How I Hate to Get Up in the Morning.” And she is learning to play piano on a new keyboard Glenn bought for her. Yet she waves off any notion of a professional return.

“I’m fortunate that I did what I did and am doing what I’m doing,” she said. “I’m still here, and I’m still singing. And I’m smiling all the time.”

—
The post Nearly 80 years ago, this Jewish singer hoped to be the next Judy Garland. At 95, she’s getting recognized. appeared first on Jewish Telegraphic Agency.

Nearly 80 years ago, this Jewish singer hoped to be the next Judy Garland. At 95, she’s getting recognized.