(JTA) — Rabbi Yael Buechler conceived of her latest product a whole year ago, after planning ways to make the Passover seder fun for her two young sons. But it wasn’t until she started promoting the matzah pajamas she designed that she decided to make adult sizes, too.

After she reached out in December to The Maccabeats — the Orthodox a capella group that releases splashy new videos for most holidays — to offer kids’ pajamas for their Passover project, they demurred.

“They wrote back jokingly, ‘Haha — but like, do they come in grownup sizes?’” Buechler recalled.

Now, both lines have been selling like, well, unleavened hotcakes. Jewish influencers have modeled the pajamas on social media, often as entire families, and the children’s set vaulted near the top of Passover sales rankings at Modern Tribe, an online marketplace for Jewish products. And on Friday, four members of The Maccabeats premiered a new video while wearing the adult matzah pajamas.

That this year’s breakout Passover product is technically sleepwear reflects a new frontier in the ongoing commercialization of Jewish holidays. It also reflects the turn toward comfort clothes that Americans in general have made since the COVID-19 pandemic began just before Passover two years ago.

“You used to get dressed up to go to seder, but now everyone is a lot more casual,” said Amy Kritzer Becker, one of Modern Tribe’s owners.

Indeed, the promotion of fancy clothing for Passover is a prime example of American consumerism layered atop traditional Jewish practice. Many traditionally observant families buy new clothes, especially for children, for the holiday, to fulfill the mitzvah of “simcha,” or joy.

That became a marketing opportunity for clothing manufacturers as Jews moved to the United States in large numbers and emerged as a new consumer segment.

“Because of the alignment of the Passover holiday with Easter, it was an opportunity for Jews to also purchase nice attire,” said art historian Kerri Steinberg, author of “Jewish Mad Men: Advertising and the Design of the American Jewish Experience.”

Steinberg says the commercialization of Judaism has been a defining characteristic of American Judaism — and, in some ways, a safeguard for Jewish identity in a country that long boasted of being a melting pot.

“One thing that’s been very discrete and sort of distinctive I would say about Judaism in America is how it’s been branded and marketed, and packaged,” she said. “[That acculturation] stopped short of full assimilation because in order to maintain a vibrant Jewish market, their identities had to be sort of retained in a discrete way.”

“In America, capitalism has been the key structure,” Steinberg added. “So it does make sense that there were opportunities for more consumption of Jewish goods and products around the holidays.”

Some of those goods and products were integral to observing the holiday. American Jewish newspapers from the turn of the century and onward featured ads from companies like Streit’s, Horowitz, and Manischewitz battling over claims to the best matzah and whitefish. An ad for Horowitz matzah from the April 8, 1921 issue of The Hebrew Standard 1921 Image by Image via NLI Historical Jewish Press 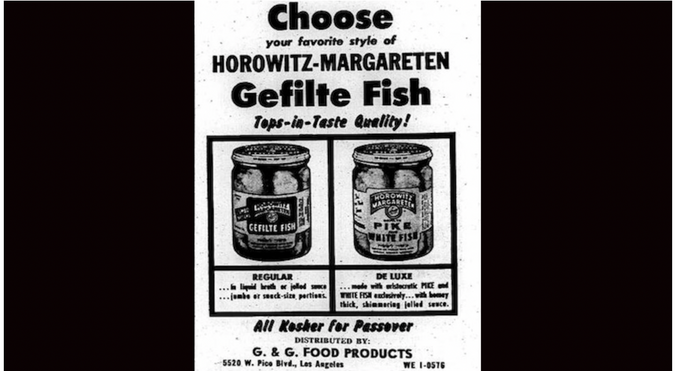 An ad for Horowitz gefilte fish, from a March 29, 1963 issue of the B’nai B’rith Messenger. Image by Image via NLI Historical Jewish Press

And of course there is also the Maxwell House Haggadah, created as a marketing ploy for the coffee company in 1932 and still produced today. Its creator, Joseph Jacobs, was an advertising maven who saw huge potential in a base of Jewish customers; he is credited with inventing the concept of targeted marketing.

But other products promoted for Passover had little or nothing to do with what happens during it. Stetson advertised its hats to Jewish customers in Jewish newspapers, while Colgate hawked perfume and other companies noted sales on shoes. Even Macy’s had a Passover department advertised in a March 1912 edition of the now-defunct Hebrew Standard.

By the second half of the 20th century, other forces were working in favor of Passover products. The rise of identity politics in the 1970s meant that many Jews were seeking items that would let them display their Jewishness, Steinberg said. Then, starting in the 1990s, the rise of kitsch, a nostalgic aesthetic, opened the door to nostalgic items such as Manischewitz purses, Streit’s aprons and gefilte fish T-shirts.

Just as dreidel and menorah patterns are ubiquitous on items mass-produced for Hanukkah, the telltale striping of factory-produced matzah has long adorned items marketed for Passover.

“People have always loved matzah products,” said Becker, whose store offers a slew of print-on-demand matzah-emblazoned products, as well as baby shoes in the print.

“Obviously matzah is the preeminent symbol of the holiday,” Steinberg said. “Claiming matzah is just a proud assertion of Jewish distinction.”

For Buechler, who launched her line of Jewish fashion products a decade ago with nail decals of the 10 plagues, the motif was inspired by her son’s confusion.

She had gotten her children new pajamas to liven up another at-home seder, their second during the pandemic. “It goes late anyway,” she reasoned about the festive meal, which traditionally cannot begin until after sunset.

When she offered the two options — one yellow and the other blue — her then-2-year-old son declared he would have the “matzah pajamas.”

She decided to turn his idea into reality, creating a design that could be printed on fabric, ordering samples and then producing them in a large quantity in China. Then she set to work promoting the product, mailing free sets to influencers and reaching out to online Judaica stores, many of which were initially hesitant to purchase inventory they weren’t sure would sell. (Buechler also gave a set of matzah pajamas away through Kveller, the Jewish parenting site that, like JTA, is part of 70 Faces Media.) Then the adults began to demand pajamas for themselves, which were manufactured quickly.

How does fast fashion square with the meaning of the holiday?

“Passover has always been about making things in haste,” Buechler said. “And when you think about the matzah itself, the entire reason we have matzah is because we left Mitzrayim, we left Egypt, in a hurry.”

So far, Buechler says she has sold around 1,800 sets of the matzah pajamas. Etsy lists them as a “bestseller” item, and ModernTribe, which also sells Buechler’s Midrash Manicure products, has sold over 100 of the children’s matzah pajamas since adding them to their inventory. They’re the second-highest selling Passover item this year, behind coasters featuring the 10 Plagues.

“We’ve had a hard few years,” Kritzer said. “I think people just want to have a little fun too.”

—
The post Matzah pajamas are the latest trend in a long history of American Jewish branding appeared first on Jewish Telegraphic Agency.