Jewish summer camp veterans are opening a camp for trans kids. It was filled within weeks.

Amid anti-trans legislation in their state, a rabbi and a trans activist are spearheading a pioneering summer program. (JTA) — Shira Berkowitz was building a career in Jewish camping when a camp told them not to return.

“It got around that I was that was queer, and that that wasn’t appropriate for me to be a program director for girls,” Berkowitz said. “And that was really harmful to my identity. I went back in the closet for a few years.”

Berkowitz’s career and personal identity recovered, and they went on to work at Camp Sabra, Missouri’s biggest Jewish overnight camp, which they described as far more accepting.

“But I was also very aware that there was almost no queer staff, except for myself and one or two other people,” Berkowitz said.

Now, Berkowitz is working to create a different kind of summer camp experience for children — and staff — who are LGBTQ. The senior director of public policy and advocacy at PROMO Missouri, an LGBTQ advocacy group, Berkowitz is one of multiple veterans of Jewish summer camps on the founding team of Camp Indigo Point, a new camp that caters to trans children at a time when many children who are gender non-conforming are facing fierce attacks by conservatives in their own communities.

Berkowitz and longtime camp friend Daniel Bogard, a St. Louis rabbi who is raising a transgender child, dreamed up the camp late last year, as the Missouri legislature was gearing up for a session in which three anti-trans bills were introduced within the first month. Another three were added in February, and last week, the Missouri House of Representatives passed two bills that would limit trans children’s participation in sports.

This year has already seen a record amount of anti-LGBTQ legislation nationwide. Republicans in at least 30 states have specifically introduced bills to bar trans children from school sports; more than 300 introduced bills would constrain how gender and sexuality are taught in schools and prevent access to gender-affirming medical care for trans children.

The climate has made Camp Indigo Point a hot destination, and its one-week session in June filled with 93 kids from 27 states in just weeks.

More than 50 children are on a wait list, and 135 people have applied for the 29 staff positions, according to Bogard. Meanwhile, trans comic book artist and writer Lilah Sturges offered to give the camp signed copies of one of her comics.

“It’s just really cool to see the response. It’s magical,” Bogard said, adding, “Next year clearly we are going to have to expand.”

Like Berkowitz, Bogard went to Camp Ramot Amoona for much of his adolescence, which he credits with setting him on the path that led him to become a rabbi. As a young adult, he became a song leader there and later took a job as assistant director at Camp Sabra. He is the only non-LGBTQ member of the Camp Indigo Point’s leadership team, a role that he’s taken on in addition to his work as a rabbi at Central Reform Synagogue in St. Louis.

The parent of a trans grade-schooler, Bogard has become a prominent trans rights activist in Missouri, frequently testifying at the state capitol in Jefferson City. His Twitter threads about the legislative threats facing trans children in his state have gained him a national platform.

“There’s not a family of a trans kid in a red state in this whole country who’s sleeping well at night,” Bogard said. “This is not hyperbole. I’m having panic attacks at night, like, do we need to flee the state?” 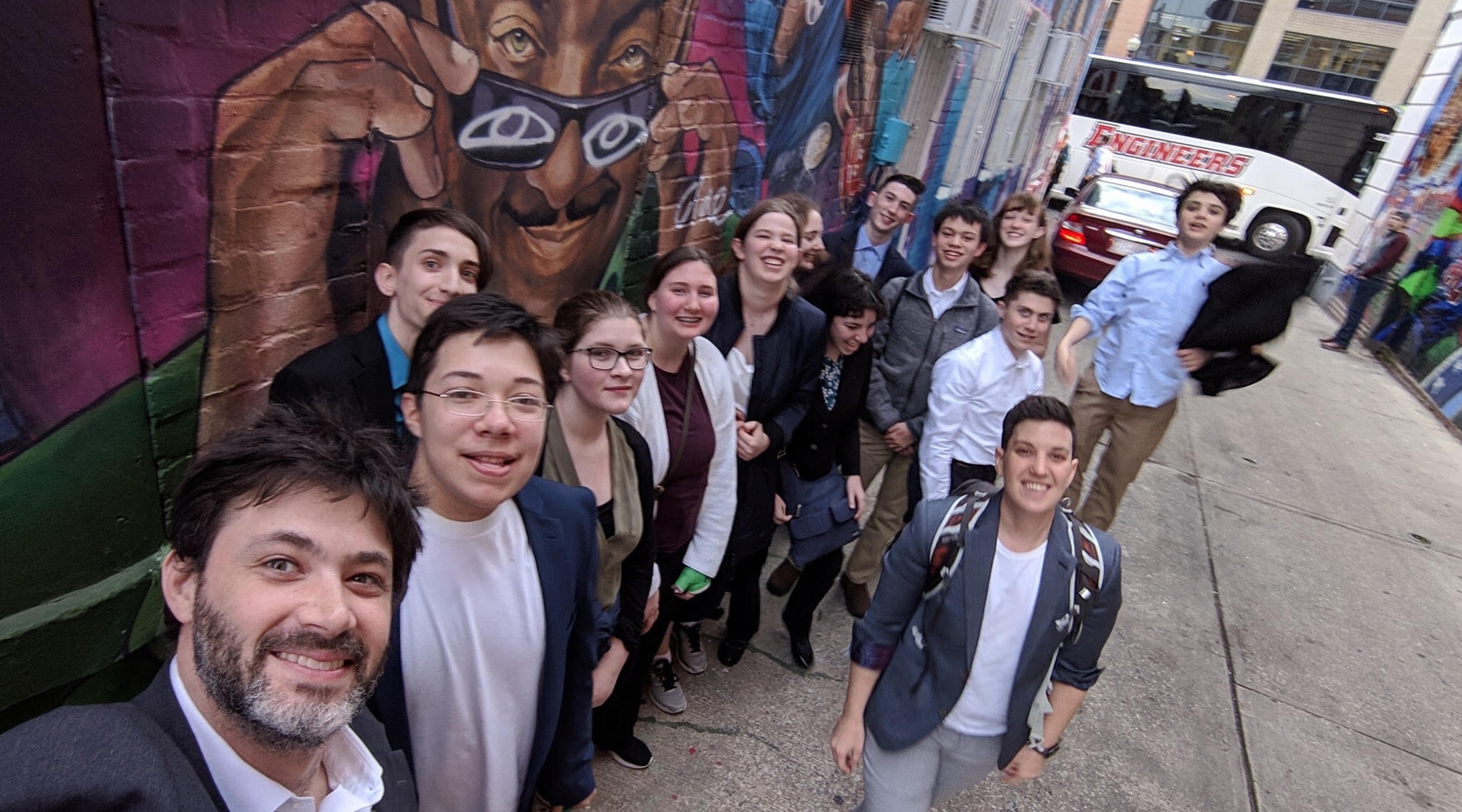 Despite it not actually being a Jewish camp, the staff and incoming campers at Indigo Point are largely Jewish and steeped in Jewish camp experience. Its host space, Camp Manitowa in Southern Illinois, was also founded by two veterans of the Jewish camping movement seeking to create an inclusive camp environment. After the 2014 murder of Michael Brown Jr. by police in Ferguson, Missouri, Camp Manitowa opened Camp Ferguson to host children affected by school closures in the area.

It’s no surprise that alumni of Jewish camps are leaders in the effort to create inclusive camps, said Jeremy Fingerman, CEO of the Foundation for Jewish Camp.

“Jewish camp has long been recognized for the leadership skills — problem solving, communication, creativity, independence, critical thinking — which are developed and refined as a camper or as a counselor,” he wrote in an email.

“In the last decade, we’ve seen tremendous growth in the field of specialty camps — opportunities for meaningful Jewish experiences and community building for campers of specific demographics or with interests in specific skill development,” Fingerman added.

Meanwhile, many Jewish camps are making efforts to accommodate LGBTQ campers. In New York, Camp Eden Village, an environment-focused camp, launched an “all-gender” cabin three years ago for children who are gender non-conforming and their allies. So did Camp Tawonga, a 90-year-old Jewish camp in California. A day camp on Long Island, also in New York, caters to LGBTQ children.

The Foundation for Jewish Camp recently hosted a day of learning for more than 100 Jewish camp professionals focused on mental health, gender identity and sexual orientation.

The efforts could yield a different experience for today’s campers from that of Berkowitz and others whose own Jewish camping experience was inspiring but not gender-affirming.

“For a lot of us millennials who went to summer camp and struggled with being transgender, gender non-conforming kids in such a binary Jewish summer camp structure, we wanted to be able to provide something else,” Berkowitz said.

At Camp Indigo Point, campers will experience traditional camp activities such as archery, canoeing, arts and crafts, and sports. But there will also be special programming for LGBTQ community-building, as well as attentiveness to the medical issues children might be bringing with them. 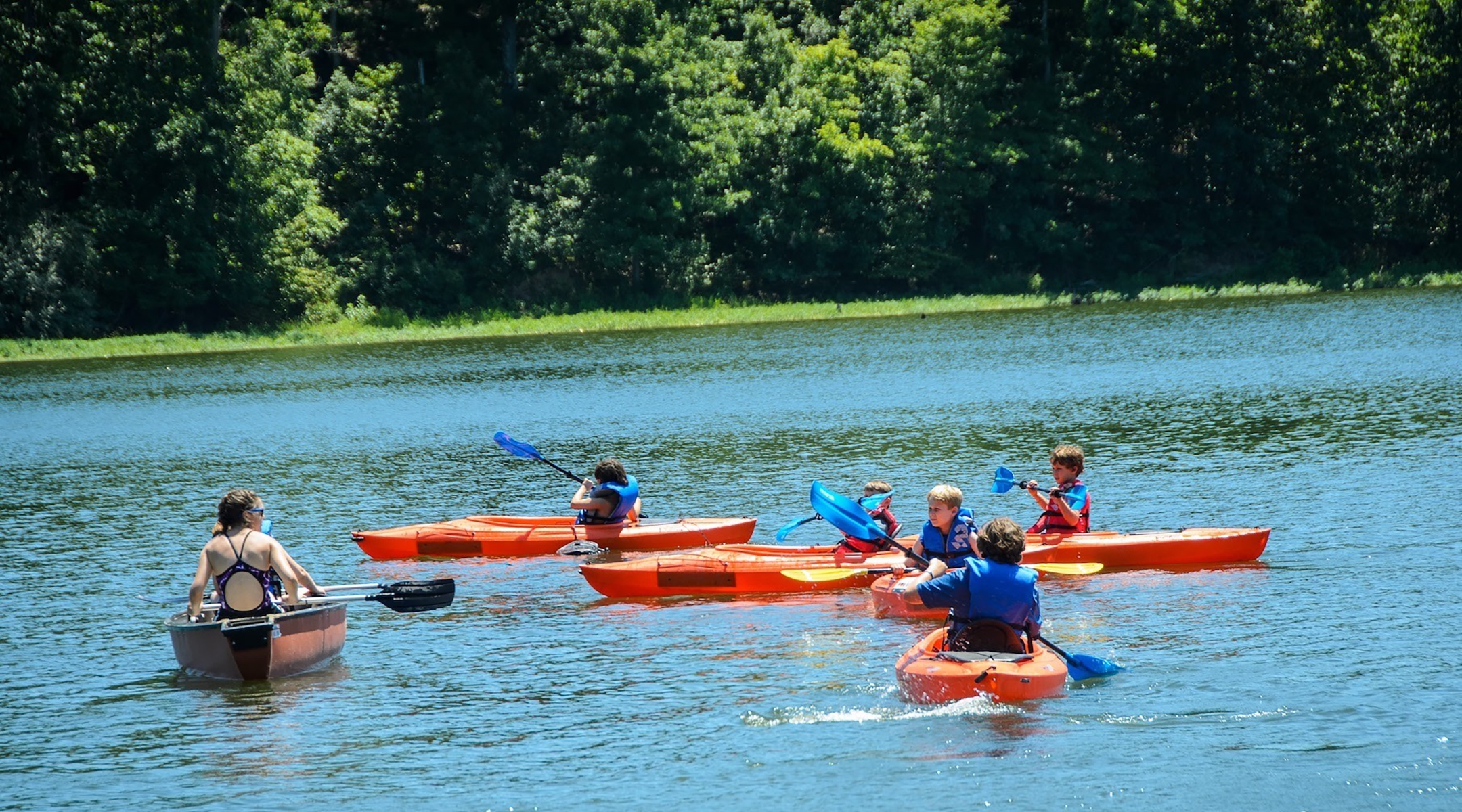 Campers at Camp Indigo Point will participate in traditional camp activities such as canoeing, and will also have special programming catered to LGBTQ community-building. (Courtesy Dan Grabel)

Campers may be pre-surgery or pre-hormone therapy or on hormone blockers, and may need privacy and a safe environment to remove their binders or undergarments, as well as nursing staff capable of providing hormone therapy and support for the needs specific to trans kids.

The camp aims to serve children who might not otherwise be headed to camp this summer. Priced at $575 for one week, the camp is less expensive than many summer camps but still unaffordable for many families, and Bogard said it had doled out $12,000 in scholarships already.

Berkowitz said they want Camp Indigo Point to be a place where kids can “find some of the support and the love and the likeness around their peers, where they can just have a really awesome, fun summer camp experience.”

They added, “I think a lot of kids want to know that they’re going to be accepted in their cabins.”

Jewish summer camp veterans are opening a camp for trans kids. It was filled within weeks.