Neil Lane, the official jeweler of ‘The Bachelor,’ is designing luxury ketubahs

“I’m doing exactly what God wanted me to do,” said the Brooklyn-born jeweler to the stars. Neil Lane, who has designed for the stars, spoke with JTA about his Jewish upbringing, the Jewish icons he’s designed for, and why designing ketubahs is in his DNA. (Authentic Brands Group)

(JTA) — Jeweler Neil Lane’s name can conjure many things: celebrity wedding rings, for the likes of Madonna, Rihanna and Penelope Cruz. “The Bachelor,” the reality dating show for which he designs the end-of-season rings. Those ubiquitous Kay Jewelers commercials, which often feature trademarked Neil Lane diamonds.

Now the Brooklyn-born designer has embarked on arguably his most Jewish project yet — designing ketubahs, or Jewish marriage contracts, which are often framed and given an artistic aesthetic.

Lane has teamed up with Ketubah.com, releasing four original ketubahs on the platform on Monday. He has also curated a collection of his favorites by other designers.

A Neil Lane ketubah doesn’t come cheap: they start at $700 and can get much pricier.

The project helped him reconnect with his Ashkenazi roots, he told the Jewish Telegraphic Agency on the phone from Los Angeles.

“It’s my history. It’s my ritual. It’s a very personal journey,” he said. 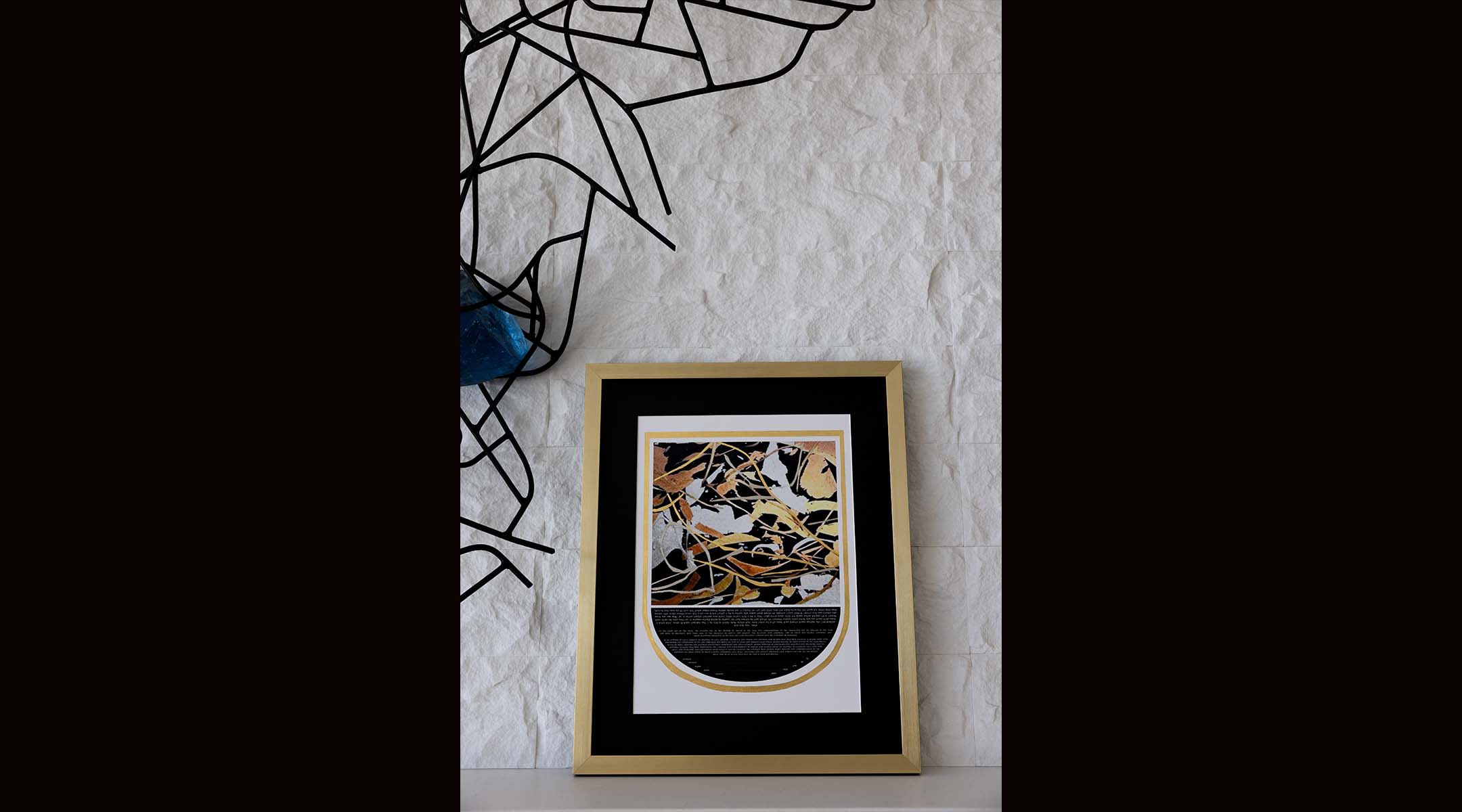 Lane told JTA that there is faith involved in making art. “To be an artist, there is a spirituality and a trust in the universe and a trust in what you do,” he said. (Authentic Brands Group)

Lane spoke about his Jewish upbringing, some Jewish icons he has worked with and why designing ketubahs is in his DNA.

This interview has been lightly edited and condensed for clarity.

JTA: Tell me about your Jewish upbringing in Brooklyn.

NL: I grew up in an area called Marine Park. I was bused in as a little kid to Coney Island to go to a yeshiva called Yeshiva Shaare Zedek. My grandparents are all from Russia and Poland, and they wanted me to go. I hated it! I was kind of a truant and never studied. My family was part of the Jewish community. We didn’t keep Shabbat but we had a typical Rosh Hashanah and Yom Kippur, and I had a bar mitzvah, and when I was little the kosher butchers used to deliver meat. I think my father used to hide bacon in the bottom shelf of the fridge!

How did this ketubah collaboration come to be?

I never would have thought of doing it but I’ve always been aware of ketubahs — I studied at the Kabbalah Centre for 20 years and I’ve been to many Jewish weddings. I also started as an antique dealer buying antiques, and sometimes I’d work in Pennsylvania — the Pennsylvania Dutch have something called a fraktur. And they were very decorated, not unlike a ketubah. So it was somewhere in my consciousness. 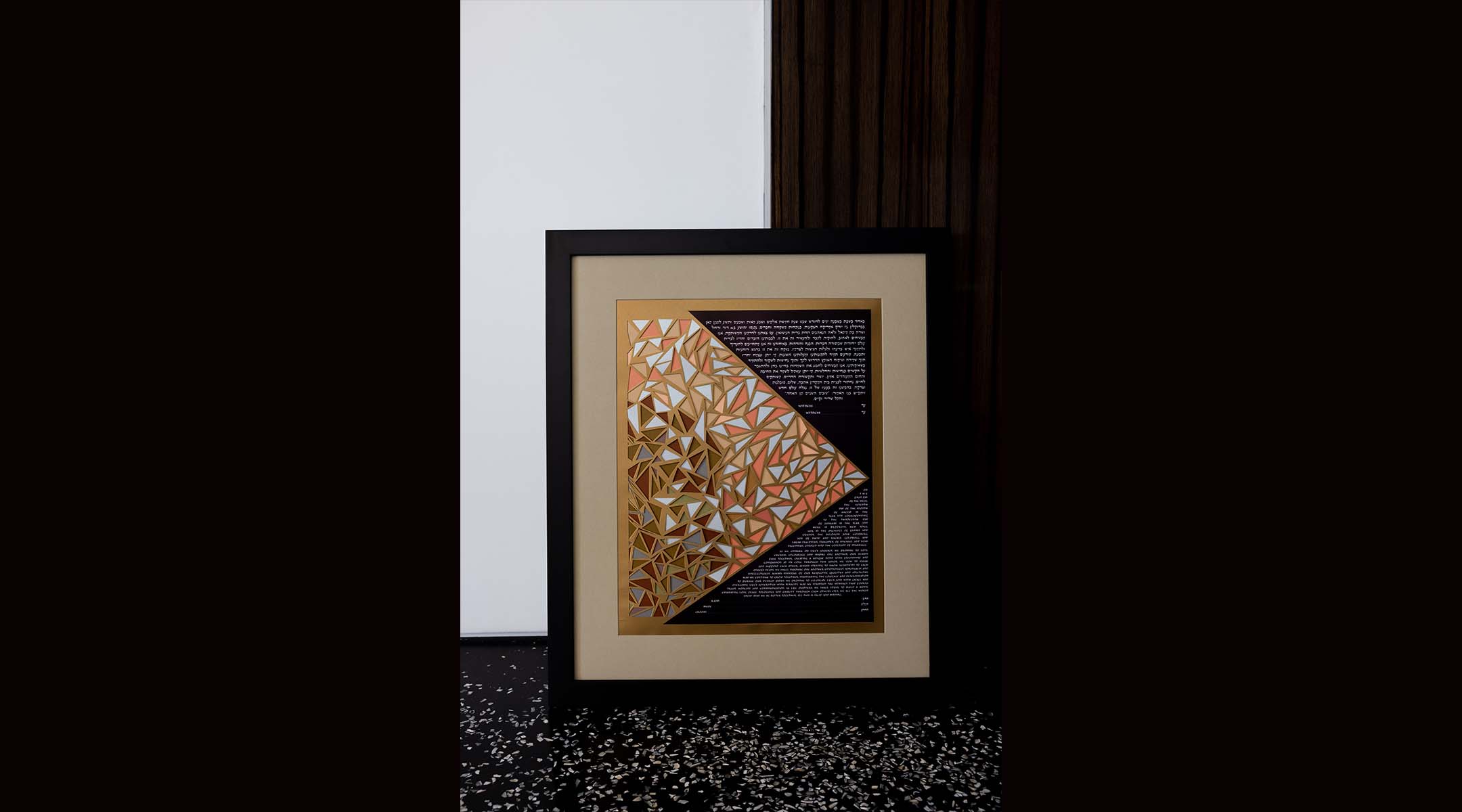 Lane told JTA that designing ketubhas is “exactly what God wanted me to do.” Authentic Brands Group”

The company we’re working with is progressive in their ideas, so open and modern. In the 19th century, the ketubahs were really traditionally decorated and all the same format, like a biblical tablet. But now the ketubahs have all these different references. They have all the traditional ones, but they have modern ones too: art deco, non-traditional, abstract, floral. Why not have a ketubah that goes with your house?

What were some of your influences as you were designing them?

There’s definitely the spirituality of it. Art is very spiritual. To be an artist, there is a spirituality and a trust in the universe and a trust in what you do. There’s a faith involved. So it was right up my alley. I grow flowers and florals are a constant inspiration. Also sparkle and glamor — one of the ketubahs is very iridescent. And I work abstractly with colors, metals and metallics. The facet of the diamond has a geometricity in it, and the metallic design is a very triangular abstraction of diamonds. So in my imagination I try to bring all of that to what I’m doing.

Never miss a story. Sign up for JTA’s Daily Briefing.

Did you do any sort of historical research into the ketubah?

I remember when I was a little kid, I went with my family to a rabbi’s house, and he had this beautiful ketubah on his wall. It was probably a Renaissance revival one. It was probably from Europe and it could have been from the early part of the 20th century. Some modern ketubahs have [influences] that are historically relevant, that have been relevant to the Jewish people since… When was the first ketubah? I don’t know!  God handed it down and they carried it through Egypt! The designs are my own, but they’re an homage to the past with a taste of the future.

I was commissioned to design jewels for Elizabeth Taylor’s 70th birthday. It was an intimate party and everyone got a Neil Lane rockstar-type giant ’70s necklace. Everyone had one at their place setting. And Barbra Streisand — you can’t get more Jewish than that! I’ve worked with her a zillion times. 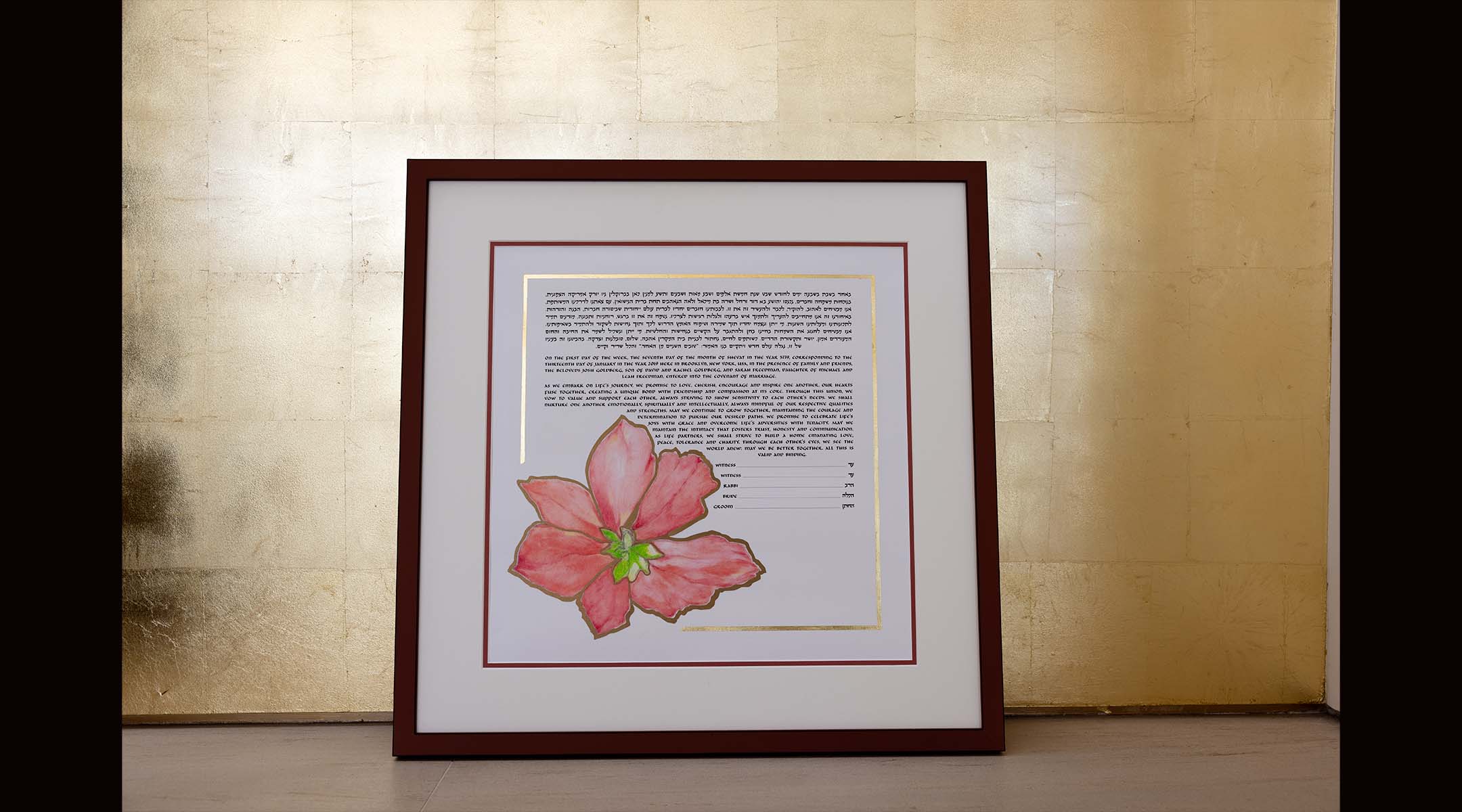 You’re famous for designing the engagement rings on “The Bachelor.” If there were a Jewish “Bachelor” couple interested in a ketubah, would you be willing to design one for them?

Of course I would! I’d probably incorporate into the design where they did the ring proposal… I would incorporate some of the design I did on their ring… Even though a ring is a small jewel, it holds so much meaning and significance. I try to create a lot of detail in the rings that emulates or somehow includes that love.

The ketubah is central to the ritual of getting married, and that moment of forming a family is so important in Jewish tradition. What does it mean to you to be involved in these crucial moments of people’s lives?

It’s an honor and humbling to design so many people’s wedding rings that are part of their lives in that small-jewel way. Even on “The Bachelor,” I meet bachelors and show them rings and they have children now! With ketubahs, it’s a combination of that feeling and also the feeling that it’s my tradition. It’s my history. It’s my ritual. It’s a very personal journey.

My grandparents emigrated from Eastern Europe — I’m 99.99% Ashkenazi — and there was the tragedy of the Holocaust. And continuing this kind of tradition — not in the same way, but in a new, enlivened, different way, in a contemporary modern way — it’s very exciting. It’s an honor to be able to do that my whole career, being in people’s lives in that special moment. And now to be able to design a special work of art to celebrate that union, not just in the physical form of a jewel ring, but now in an artistic form — well, that’s right up my alley. I’m doing exactly what God wanted me to do.

Neil Lane, the official jeweler of ‘The Bachelor,’ is designing luxury ketubahs