(Jewish Chicago: The JUF Magazine via JTA) — The Moishe House model — three to five Jewish young adults living together and creating community through Jewish programming — works well in 30 countries. But what happens when a war erupts right outside the front door?

Daniil Belyi, a resident of the Moishe House in Kyiv, Ukraine, has firsthand experience with this conundrum. As a resident for less than a year before the war broke out, he was still trying to find his place in the house and what programs he was most comfortable with running.

But once the war began, Belyi and his fellow residents, Andrey and Andy, had different problems: instead of building the Jewish community with events, they were building shelves for community organizations that they then filled with donated food. And instead of welcoming Shabbat, they were welcoming displaced people who needed somewhere to stay. 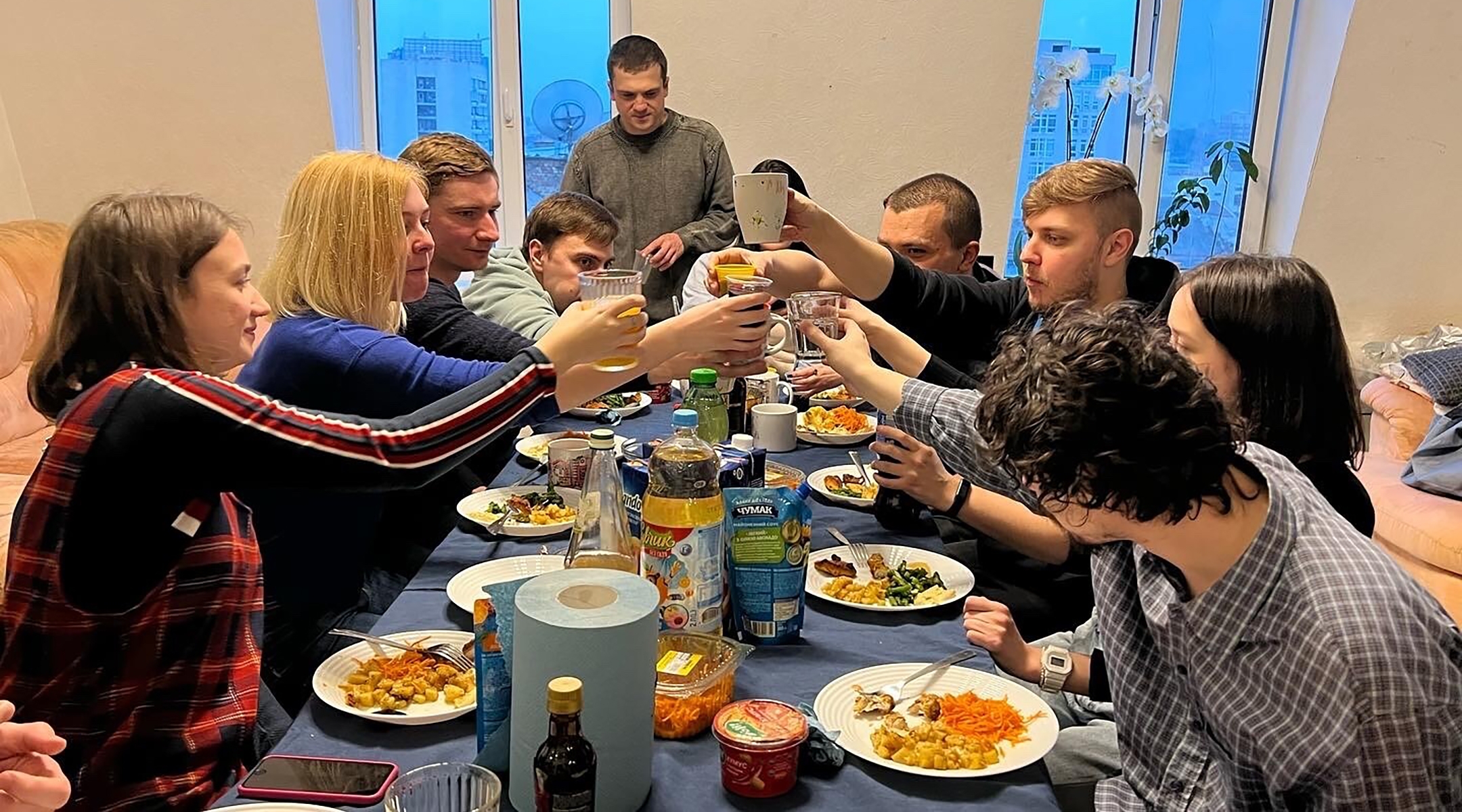 Moishe House Kyiv is one of the 19 Moishe Houses and two-person Pods in the former Soviet Union. Like Belyi and his housemates, Moishe Houses across Ukraine were quick to react in the wake of Russia’s invasion of Ukraine that began in late February. When the Kharkiv house had to close due to increased violence in the city, a pod in Chernivtsi opened its doors. And for the first few months of the war, the Moishe Houses pivoted to perform necessary community services while still fostering friendships and staying close to Jewish values.

So far, in Kyiv — a house supported by the Jewish United Fund of Metropolitan Chicago — the residents have driven countless miles to help older adults, single mothers and people without jobs get medicine, food, hygiene items and water. They also regularly buy products for charitable kitchens cooking 1,000 portions of food daily for bomb shelters, hospitals and older adults in care.

Coming up with ways to meet community needs is not new for Belyi or his roommates. In fact, Moishe House Kyiv is “[known] for their community members leading programs and stepping up” before becoming residents, said Yana Tolmacheva, the house’s senior director of Russian-speaking Jews’ programming.

Even so, the residents and community members sometimes struggle with how to deal with the war encroaching in their space. An 11 p.m. curfew makes it hard to run evening programs. Anxiety is widespread, and some alumni — including a consistent program attendee Belyi met five years ago — have enlisted in the Ukrainian military.

At a time like this, Moishe Houses across the former Soviet Union are concerned with mental health.

“After weeks and months, we understood that the war is not going to end [right away],” Belyi said. “We must help people feel better. This is the reason why we began to make events again.”

Moishe House Kyiv has opened its doors as a safe space to talk through fears, find distractions and celebrate life’s happy moments.

Between the “shellings, sirens, and bombs,” Belyi and his fellow Moishe House participants take comfort in the space they have built: a home where they can sit on the balcony and feel comfort in the midst of travail — and become an oasis for others.

“Moishe House became the place where I understood how different and diverse Judaism is and how you can be anything you want in Judaism and the Jewish community,” Belyi said.

This article was originally published in Jewish Chicago: The JUF Magazine and is reprinted with permission.

Michelle Cohen is the editor of HAKOL, the Jewish newspaper of the Lehigh Valley in Allentown, Pennsylvania. She began experimenting with nail art while attending Colgate University.