Jack Abraham offers a $10,000 reward for return of a scroll that has traveled with him on business for years Jack Abraham with his family Torah, which has been used by his family and Jewish travelers around the world for almost two decades. (Courtesy)

Jack Abraham, who has run a jewelry business under his name since 1962 in Manhattan’s Diamond District, told the New York Jewish Week that the Torah was taken on Sunday June 12 during the Jewelers Circular Keystone trade show at the Venetian Hotel.

“I’ve been going to the expo since its inception for 25 years,” Abraham said. “I organize Shabbat services there. Every year I take my Torah. I left it there, it was in the room [where services were held], I was told it was secured, and somebody took it.”

Abraham added that he has been working with the Las Vegas Metropolitan Police Department and they have “an excellent lead.”

“We have pictures,” Abraham said. “Clear pictures. He [the suspect] tried to sell it. We know that. We’re going to follow up that lead, but I want to leave it to the police.”

The LVMPD did not respond to a request for comment.

A Las Vegas Fox affiliate first reported that Abraham offered a $10,000 reward for the return of his Torah.

“If he comes forward before the police go after him, he’ll get the money,” Abraham said. “But if not, the money is going to charity.” 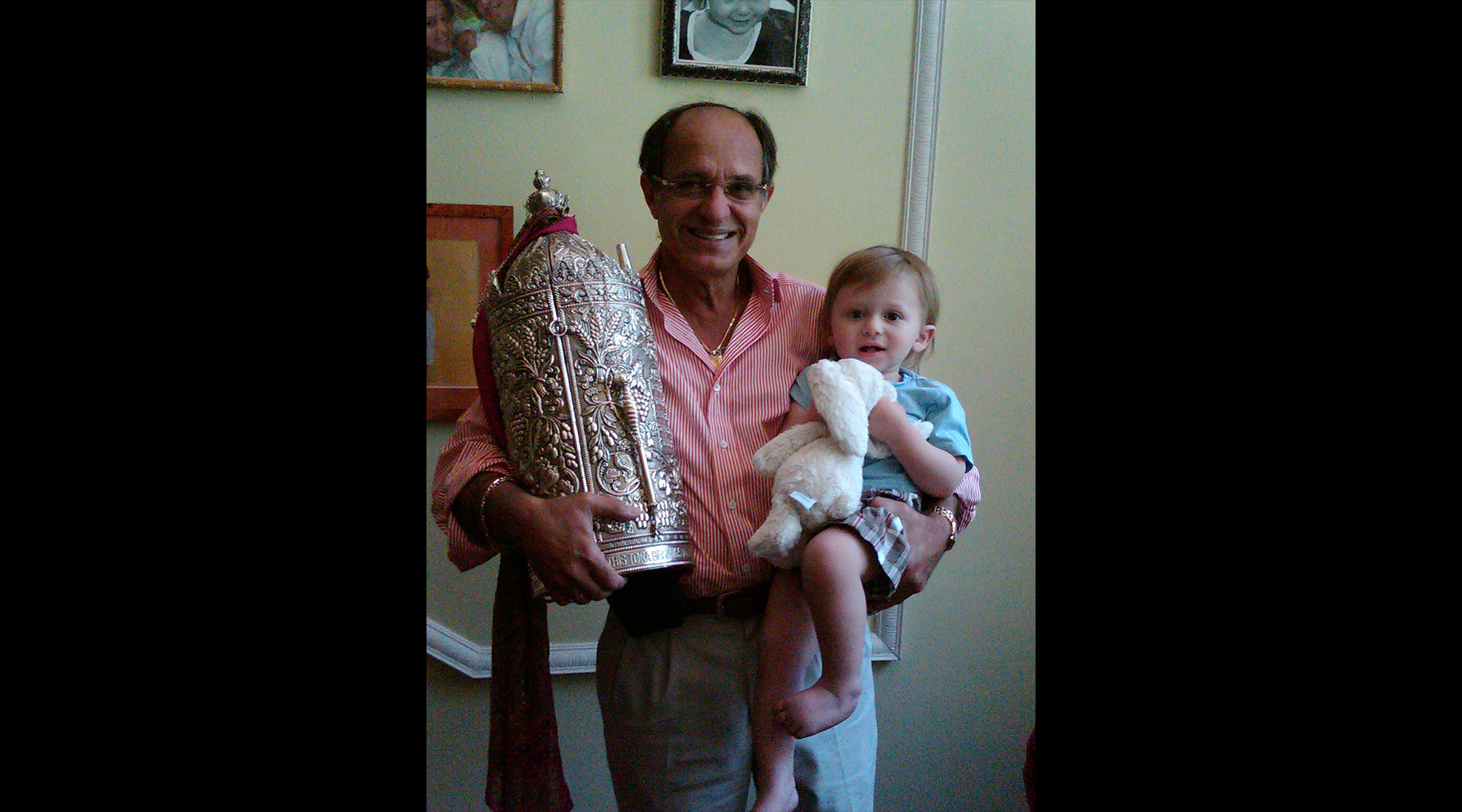 Jack Abraham’s missing Torah has been part of his family for nearly 20 years. (Courtesy)

Abraham said the Torah, which he commissioned around 20 years ago, is mostly used to hold services for Jewish people traveling in the jewelry business.

“It’s been to events in Israel, Arizona, Moscow,” Abraham said. “We take it to feel at home. In 1986, we organized Shabbat in Arizona with just 10 people. Last year, there were 400 people in one room for Shabbat with that Torah.”

He added that the Torah has been at all of his family celebrations and that his children’s names are written in it, as well as their husbands’ and wives’.

“It has a tremendous amount of meaning for the family and all those people that depend on it from all those years,” Abraham said. “You feel the spirit of Shabbat wherever we have the show because of this Torah.”

The Torah scroll is normally kept inside a silver container, according to the Sephardic tradition.

Abraham said that people from all over the world have been messaging him, praying for the return of his Torah. “It’s hard to swallow what happened,” he said. “You shouldn’t take something holy like this. To him [the thief], it probably means nothing except for how much he can sell it for, but he should understand the holiness of the thing.”

The Venetian Resort did not respond to requests for comment at the time of publication, but Abraham said he felt “disappointed” with how they responded to the incident.

“They kept saying that the police are handling it,” Abraham said. “They said a private company was doing security. If they had been more speedy, they could have stopped him by now.”

Abraham, who was born in Afghanistan, considers himself a Mizrahi-Sephardic Jew, and is president of Congregation Anshei Shalom, an Afghan synagogue and community center in Jamaica Estates, Queens.

“My family started it,” Abraham said. “We made certain that it’s a community. We’ve done it through the American government. We don’t control it, every year we have an election. We have a regular board. There are a little over 100 members.”

Abraham said that his family were the first Afghan Jews to build synagogues in Afghanistan, then in Queens, which started in his family’s basement.

“The synagogue in Queens [Congregation Anshei Shalom] is named after my father,” Abraham said.

Abraham remained hopeful about getting his Torah back, saying that he wants the thief to return it before the police catch him.

“Let’s hope the guy that took it brings it in before we go after him,” Abraham said. “If he knew it was a Torah, if he tried to sell it, it doesn’t matter. I’ll close my eyes to him.”

The Venetian, formerly owned by the company led by Jewish philanthropist and political donor Sheldon Adelson, was put up for sale after his death in 2021 and changed hands officially earlier this year.