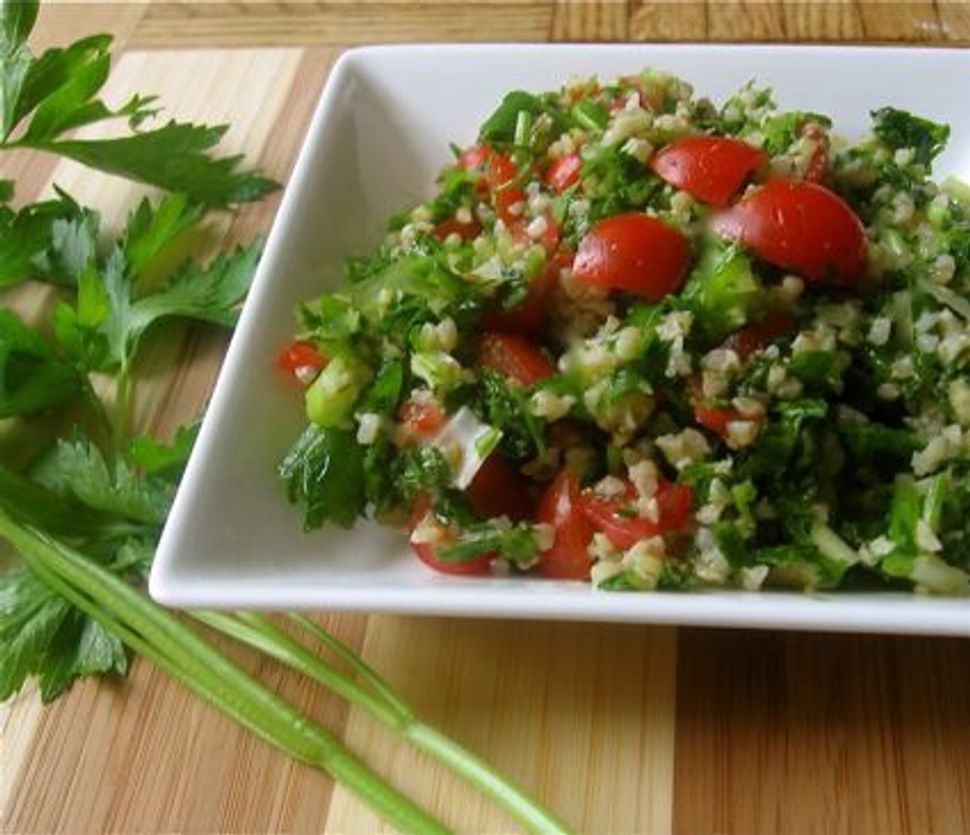 I grew up eating my mother’s American tabbouleh–starchy, lemon-doused bulgur salad. This was the 1980s, when many American Jews were incorporating “Israeli-style” foods into their culinary repertoire. But while my mom’s tabbouleh was delicious, I later discovered that it hardly resembled the authentic version, which features a higher ratio of painstakingly chopped fresh parsley and tomatoes to grains of bulgur.

Tabbouleh, which comes from the Arabic word tabil (“to spice”), is not actually an Israeli or Jewish dish, per se.

It originated in the Levant, the historic Middle Eastern region that encapsulated a large swath of land east of the Mediterranean Sea, including modern-day Israel along with Syria, Lebanon, the Palestinian territories, Jordan, and southern Turkey, among other countries. Like hummus and falafel, tabbouleh is tied to the broader region as opposed to one particular nationality or culture. Still, it has become an integral part of modern Israeli cuisine, most often served for summer lunches or as part of a salad course.

While bulgur is not traditionally tabbouleh’s star ingredient, it is, perhaps, the dish’s most defining component. An immediate relative of cracked wheat, bulgur is made from wheat berries that have been ground, partially cooked, and dried, making it a quick-cooking and relatively inexpensive base or addition to countless recipes (like these).

According to an article in the San Francisco Chronicle: “Archaeological finds in Greece and the Eastern Mediterranean suggest that people have been processing wheat into bulgur for millennia”–and the obsession continues today. The same article revealed that in the present day, Turks, who historically helped spread the grain’s popularity across the region, consume “about a half-pound of bulgur a week per capita.”

Bulgur adds texture and substance to the otherwise all-vegetable tabbouleh, cutting the acidic lemon juice and tomatoes with its hearty, nutty flavor. In Israel, the dish is often served with pita bread, which aids in wiping up any excess juice, but there are other options, too. According to cookbook author, Poopa Dweck, who authored, Aroma’s of Aleppo: The Legendary Cuisine of Syrian Jews, in old Aleppo, tabbouleh was served with romaine lettuce leaves.

Tabbouleh can apparently also make people dance–but you’ll just have to try it and see.

one large handful fresh mint, chopped, plus extra for garnish