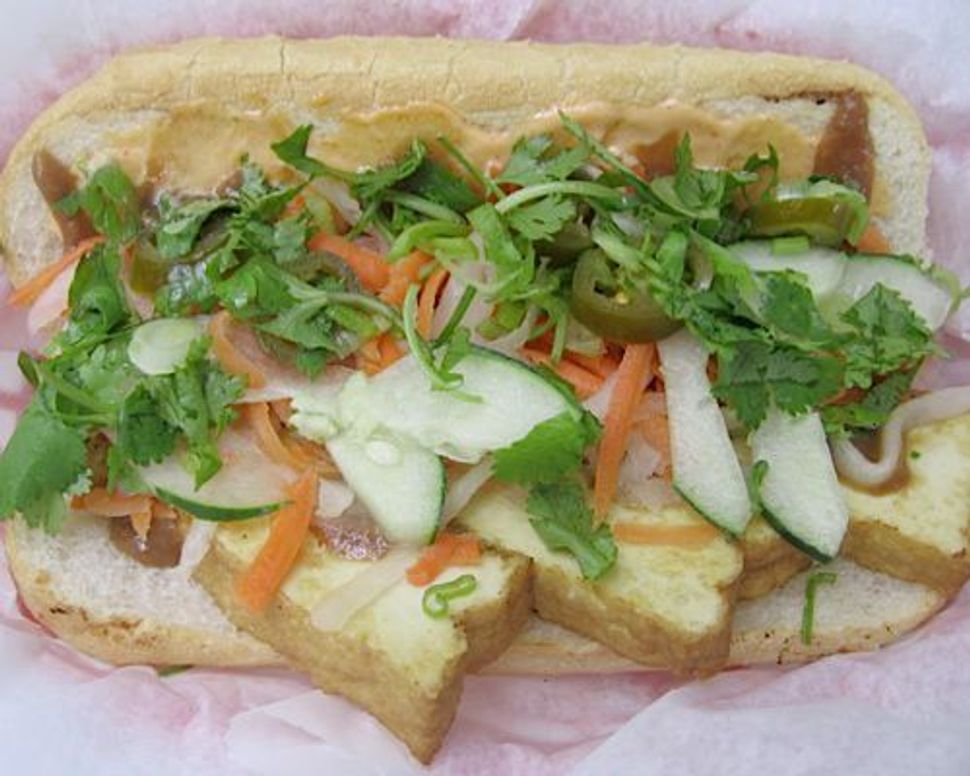 Ever since French colonizers arrived in Vietnam in the mid-ninteenth century and brought their countryside “salad sandwich” with them, which locals set marvelously askew using regional ingredients like cilantro and pickled daikon and carrots, residents of Vietnam have feasted on banh mi sandwiches. But only in the past couple of years, has the delicacy become popular with adventurous eaters in the United States.

In the wake of French colonization Vietnam was left with master bread bakers who created a special baguette-like sandwich roll that incorporates rice flour, thus serving as an airy and delightful “frame” for the layers of ingredients that compose banh mi. According to Tan Nguyen, co-owner of Rebel Heroes, a food truck specializing in banh mi that operates in Arlington, Virginia (where I work), “That crusty bread is the real requirement.”

The filling for the majority of banh mi are pork-centric, using various roast pork cuts and patés as their main components. And while chicken and vegetarian versions are common, the sandwich has yet to become popular, or even available, within kosher communities until last month.

On August 20, Kolette’s Kitchen, a glatt kosher restaurant opened on Lexington and East 56th St. in Manhattan, serving Vietnamese sandwiches alongside its Middle Eastern and deli offerings. Owner Gil Amor, an Israeli of Moroccan descent who has never been to Vietnam, learned about banh mi from renowned Vietnamese chef and banh mi maker Michael Bao.

Amor, who ran a kosher bread distribution company, began providing bread to Bao and a strong relationship formed between the two. Bao introduced Amor to the flavors of banh mi and Amor combined them with kosher ingredients.

Kolette’s Kitchen serves six types of banh mi including the “classic” composed of turkey terrine and veggie paté, ground beef and mango, and Vietnamese style chicken shawarma, all topped with pickled vegetables and fresh herbs. Since the opening the Vietnamese sandwiches have been the shop’s biggest seller, according to Amor, though he has had to field a great number of questions about what these sandwiches actually are.

“Banh mi is really all about the toppings”, says Nguyen. “Everyone has their own opinion about what makes banh mi banh mi.”

Banh Mi is composed of layers. Below, a quick guide to building your perfect tofu banh mi.

1) Layer One: The bread. Banh mi rolls can be purchased at Asian bakeries and grocery stores. If you don’t have one nearby, experts suggest using a Portuguese roll or even a soft Italian roll. A classic French baguette can work, but may be too chewy.

2) Layer Two: Slather your roll with mayonnaise. Traditionalists make a special mayo, but lime mayo, which can be purchased in a Latin grocery store, is also delicious.

3) Layer Three: Grill/heat your tofu steak. Be sure to get the pre-fried tofu so that it retains its form and isn’t too watery. Ideally, you would use three slices, each about ½ inch thick.

4) Layer Four: Fresh toppings. Should include scallions, pickled jalapeno peppers, cilantro, cucumber and pickled daikon and carrot (can be purchased in Asian goods stores or made in a few hours using rice vinegar, salt, sugar and water).

5) Layer Five: Sauce. Tofu banh mi is best with peanut hoisin sauce. If you like a little heat, add a line of Asian hot sauce like sriracha (also available at Asian grocery stores).