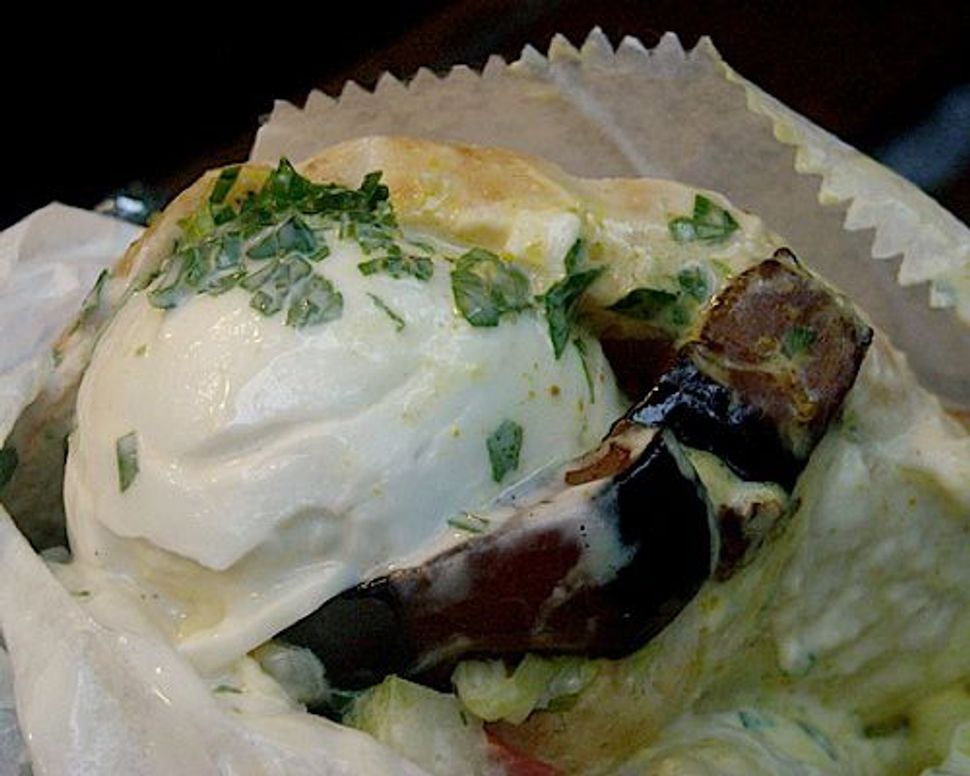 Falafel and shwarma are so ubiquitous in Israel and in the American Jewish cuisine that it would be easy to think that there are no other iconic sandwiches of Israel. For those who think this – I am supremely sorry that up to this point, you have been deprived of sabich. 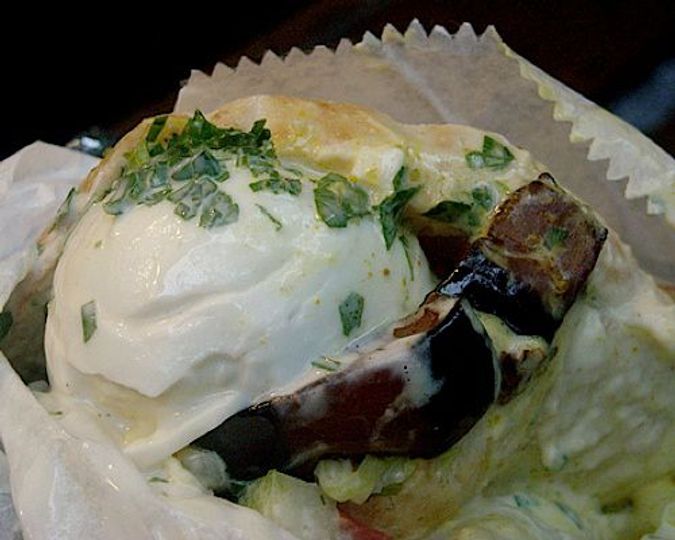 A sandwich made in pita or laffa (a baked flat bread), stuffed with fried eggplant, hummus, salads, a hard boiled or baked egg and topped with tahina and amba (a tangy bright orange condiment made from pickled mango) – sabich is a intriguing and delicious blend of textures and flavors with bites alternating between the tang of amba and the sweetness of silken fried eggplant, with the crunch of fresh Israeli salads thrown in.

The sabich at Taim, a popular Israeli take out place in New York city, that purportedly brought the sandwich to the city, was recently featured on the Village Voice’s food blog, Fork in the Road’s 100 Dishes to Eat Now list, “ a handy list of some of our favorite dishes – old standbys and new finds alike – compiled daily.”

Chef-owner of Taim Einat Admony says: “Today every falafel place [in Israel] has sabich as well. There are also some small places that do just sabich and do it very well.”

Sabich has its roots in Israel’s Iraqi community, which historically prepared and enjoyed the sandwich for shabbat breakfast, with a long-cooked baked brown egg instead of the white boiled egg it is often served with now. While most of Israel’s Iraqi community immigrated before the creation of the state in the early 1950s, it wasn’t until the 1970s that – as legend has it – two sandwich shops opened in Ramat Gan and Giv’atayim, in the suburbs of Tel Aviv, that the sandwich was introduced to the broader Israeli community. Though it took a while to catch on says Admony: “There was two places… in the late 70s, but it wasn’t common like today.”

The origins of its name are even blurrier. Supposedly the dish from Iraq did not have a specific name and according to Adeena Sussman at My Jewish Learning the name came from “The root letters of sabich S-B-H– [which] spell ‘morning’ in Arabic,” when the sandwich was originally consumed “however, some believe the letters stand for salat, beizah, hazilim (salad, eggs, eggplant) – the sandwich’s main ingredients” she continues.

Though Admony and others say it was named for the owner of one of the original sabich shops near where she grew up. “A guy that game from Iraq – it was his name he had his own his Sabich shop – is the story I’ve always heard,” says Admony.

While never one to overlook history, some of the best stories and foods are left to legend. Sabich, with its unusual blend of Iraqi and Israeli flavors, mysterious name and unclear past is the perfect example of that.

3) Add one slice of fried eggplant

7) Top with tahina and amba