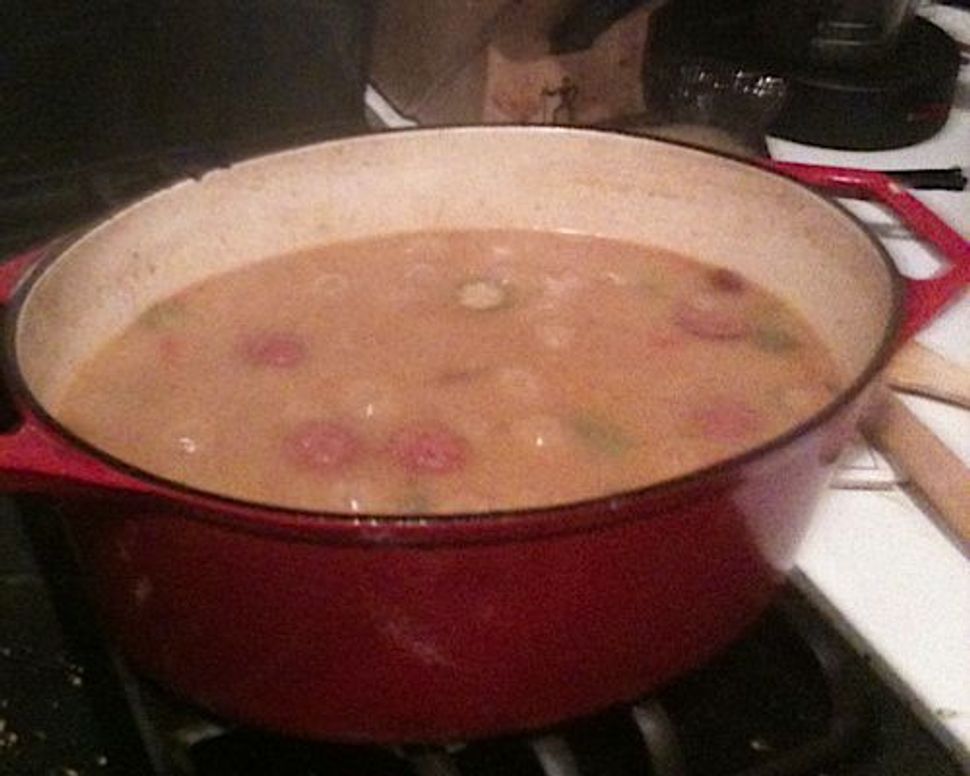 Of all the cultural adjustments that come with moving from the Bible Belt South to the Northeast, the one I was most unprepared for was dietary restrictions. Sure, back in Birmingham I knew the occasional vegetarian but save for a few folks with peanut allergies, most Alabamians are largely omnivorous. Which meant that importing my native cuisine for a group of urbane foodies like my friends in New York was a challenge — how do you make vegan barbeque? Raw jumbalaya? Gluten-free fried chicken? 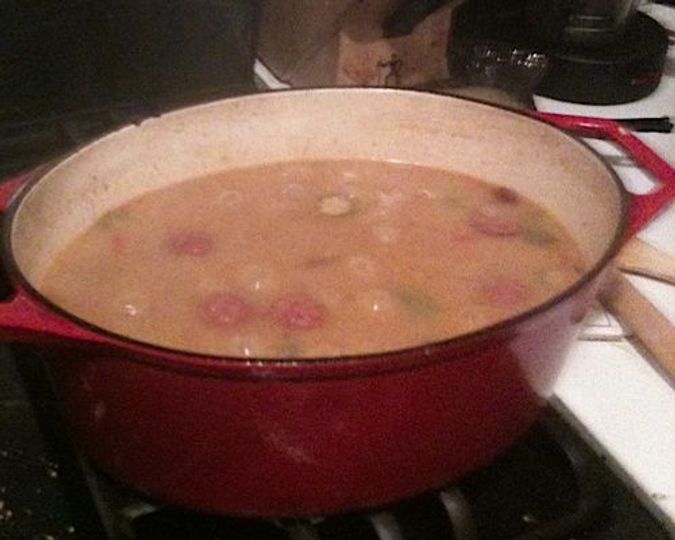 Eventually I managed to translate, with varying degrees of success, my hometown dishes into the grammar of all my friends’ diets. That is, except for one — gumbo, that marvelous, temperamental stew that seemed impervious to recipe substitutions. For my kosher friends, it was seemingly impossible to describe except as a list of no-nos: andouille sausage, crawfish, and shrimp are the traditional ingredients, and while delicious, it is also treyf as nobody’s business.

But after years of needlessly torturing my friends with dancing visions of forbidden soup, this decidedly goyish cook struck upon an idea. Gumbo, like all staples of a regional cuisine, is largely open to interpretation and varies immensely across the South. The main ingredients are really the thickening roux and that Cajun trifecta of bell pepper, celery, and onion — all things I could work with.

And luckily, I’m not the first to take this journey — there are Southern-Jewish cookbooks like Mazel Tov Y’all: The Ultimate Southern Jewish Bake Book and The Kosher Creole Cookbook to consult, not to mention a deli in New Orleans called the Kosher Creole Kitchen that serves a chicken okra gumbo. Their recipe sounded good, but a touch bland thanks to the lack of the andouille. A few kosher recipes suggested adding matzoh balls to the soup, but the idea of a mealy matzoh ball in a roux-based sauce just didn’t seem to jive with Southern tradition and flavors.

Traditional Southern Gumbo often includes exotic meats like alligator and wild duck. One could use giraffe sausage (which I recently learned from a friend, is in fact kosher) but such exotic meats are probably not necessary, not to mention are guilt-inducing if I wanted to watch “Animal Planet” ever again. Ultimately, I settled on a flavorful beef kielbasa to stand in for the andouille, supplemented by a packet of spicy turkey sausage and plain ole chicken.

The next key element to figure out was the spice. I added a couple cubanelle peppers left over from a friend’s CSA and as an homage to my West Indian neighborhood, I coated the chicken in jerk seasoning before adding it to the pot.

My recipe was a mishmash of several different sources and bits of advice I solicited from fellow Southerners. The result was a fragrant, thick gumbo just as good as any of the non-kosher version I’d made before — in fact, the kielbasa gave the dish a nice smokiness that had been absent before. The cubanelles and the zingy turkey sausage gave the dish some crackle, and the jerk seasoning added a nice, mild after-tingle. You might cut back on the spice if you don’t like your soup quite so hot — my palate has been cauterized by so many years of excessively fiery food. Some of my guests adjusted the rice-to-gumbo ratio accordingly, so that it may have been about 60% rice 40% gumbo. But when we all — a group of Alabamians and our new-found New York friends — sat down to a delicious Kosher Southern meal, the experimentation seemed well worth it.

Cooking Note: The roux is the hardest part of this whole she-bang. Other people have different techniques for it — in the oven, or you can even buy prepackaged remade roux — but mine is basically a test of your patience in the kitchen.

1) Put the chicken pieces in a plastic bag and season them with the Cajun seasoning (or black and red pepper) to taste — I used a couple tablespoons. Heat the oil in the bottom of a large pot or Dutch oven, and brown the chicken. Then add the sausage, and brown it until it looks crispy on the outside. Remove the meat and place it on a paper-towel-lined dish. Keep the oil in the pan.

2) OK, so here’s the tricky part: For the roux, knock the heat down to low. Slowly add the flour to the hot oil, bump the heat up to medium, and stir it continuously until the flour takes on the color of dark brown sugar and starts to smell like a biscuit cooking. Watch it like a hawk! If little black specks start showing up then you have to start all over.

3) Take the roux out of the pot and allow it to cool on a plate. Then add a bit more oil to the bottom of the pot and add the garlic, onions, and peppers. Sauté them for about ten minutes, then add the okra and the meat. Season the whole thing with three bay leaves, a pinch of thyme, salt, black pepper, and (if you like) more cayenne pepper. You could also throw in some cumin if you like it extra-smoky.

4) Stir in the roux, and add the can of chicken stock. Then add another three cups of hot water to the mixture, bring to a boil and then down to a simmer. Cover it and let it simmer for about 45 minutes to thicken up.

5) Serve over hot white rice. Garnish with some parsley (if you want it) and hot sauce (if you’re brave). Enjoy!

Margaret Eby is a writer, amateur cook, and well-meaning goy. She lives in Brooklyn.