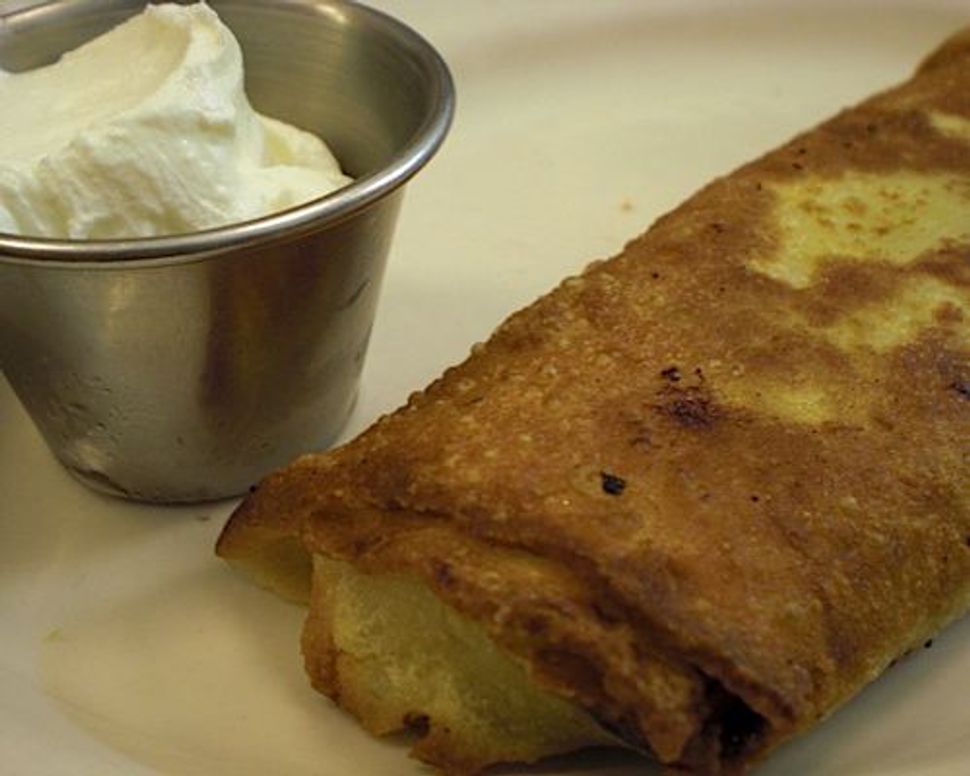 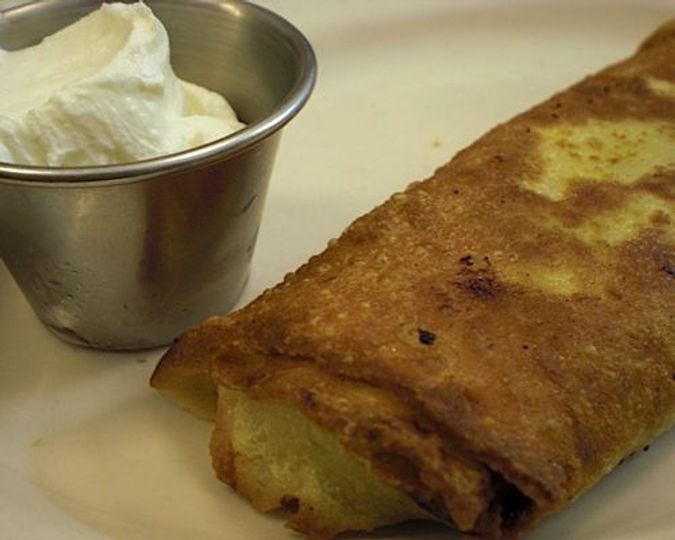 Fall with its crisp chill seems a lovely and perfectly appropriate time for a “blintz break.” No, it’s not Shavuot, but what better or more warming dish could there be for the palette after a summer of cold tomato salads and lemonade?

My love for the little wrapped treats, my general lust for food – and particularly food that feels connected to my Jewishness – makes me something of a blintz purist. A blintz is a blintz is a blintz – be it frozen and consumed at midnight as a part of a Jewish ritual or fried up expertly at one of New York’s dairy counters, it has an identity.

NO, I scoff to friends who want to debate semantics, it is most certainly NOT a crepe! Ahem. But secretly, deep in my kishkes, I have always been a little confused myself about this strange little food I’ll defend to my culinary death: What actually constitutes a blintz? Where does it come from? And, what really distinguishes a blintz from a crepe, anyway?

“The Food Encyclopedia: Over 8,000 Ingredients, Tools, Techniques and People”](http://www.amazon.com/Food–Encyclopedia–Ingredients–Techniques–People/dp/0778801500) defines a blintz as “a very thin pancake that is rolled around a sweet or savory filling, such as ricotta cheese, fruit or meat mixtures.” The word “blintz” comes from the Yiddish word “blintze,” but both trace back to the word “blini”, or pancake. Polish, Lithuanian, Russian and Yiddish all have a word for the crepe–like food, though its filling varies widely in different communities. Russian blintzes call for meat filling, cheese is fairly ubiquitous in all communities, and Sephardic interpretations call for quince. While traditional recipes exist, blintzes at their core seem to be open to interpretation, making it quite hard to be a “blintz purist,” I learned.

Blintzes as we know them were popularized in the U.S. by Jewish immigrants. “Blintzes saw their initial New York heyday from the 1920s through the 1950s, when they were ubiquitous not only in kosher or Jewish establishments, but throughout the city,” writes Arthur Schwartz in “Jewish Home Cooking”. He adds that in the 1970s, with a wave of non–Jewish Polish and Ukrainian immigrants, blintzes (not to mention their distant cousin pierogies) were extremely prevalent on the menus of restaurants opened in those communities.

Making my own blintzes seem daunting, culinarily unachievable, better left to the masters. So I started with the masters. I had lunch last week at my Lower East Side favorite, B&H, where I ordered a blueberry blintz. It was gorgeous: crispy on the outside – the wrapper had the most lovely, buttery, almost salty flavor – and warm and tangy on the inside, the nuanced sweetness of the blueberries only supported by the warm, melt-in-your-mouth texture of the filling. When I asked the blintz-fryer himself what his trick is for making blintzes, he knew better than to divulge his secrets; instead, he told me that the key was making them with lots of love. I raised a skeptical eyebrow, but he wouldn’t give.

My foregone conclusion was that – good intentions aside – I’d never be able to rustle up the right quantity of B&H-grade love to make a perfect blintz. So, joining the longstanding ranks of blintz-interpretation, I decided to break from my blintz-purity and be a culinary renegade. Others have mame the same decision. There are recipes for blintz soufflés, blintz cakes and ingredientially creative blintzes ( this recipe uses hoop cheese and carmelized apples).

Using a recipe for the blintz wrapper, from My Jewish Learning, and some garlicky mashed potatoes, to which I added a hefty pile of shallots, I wrapped my first strange, beautiful blintz. It was, needless to say, delicious (though my wrapper has a long way to go before it achieves crispy, savory perfection).

The good thing about blintzes, though, is that there are no secrets. Despite the charming hiddenness of the filling, you know exactly what you’re getting, and it’s hard to go wrong.