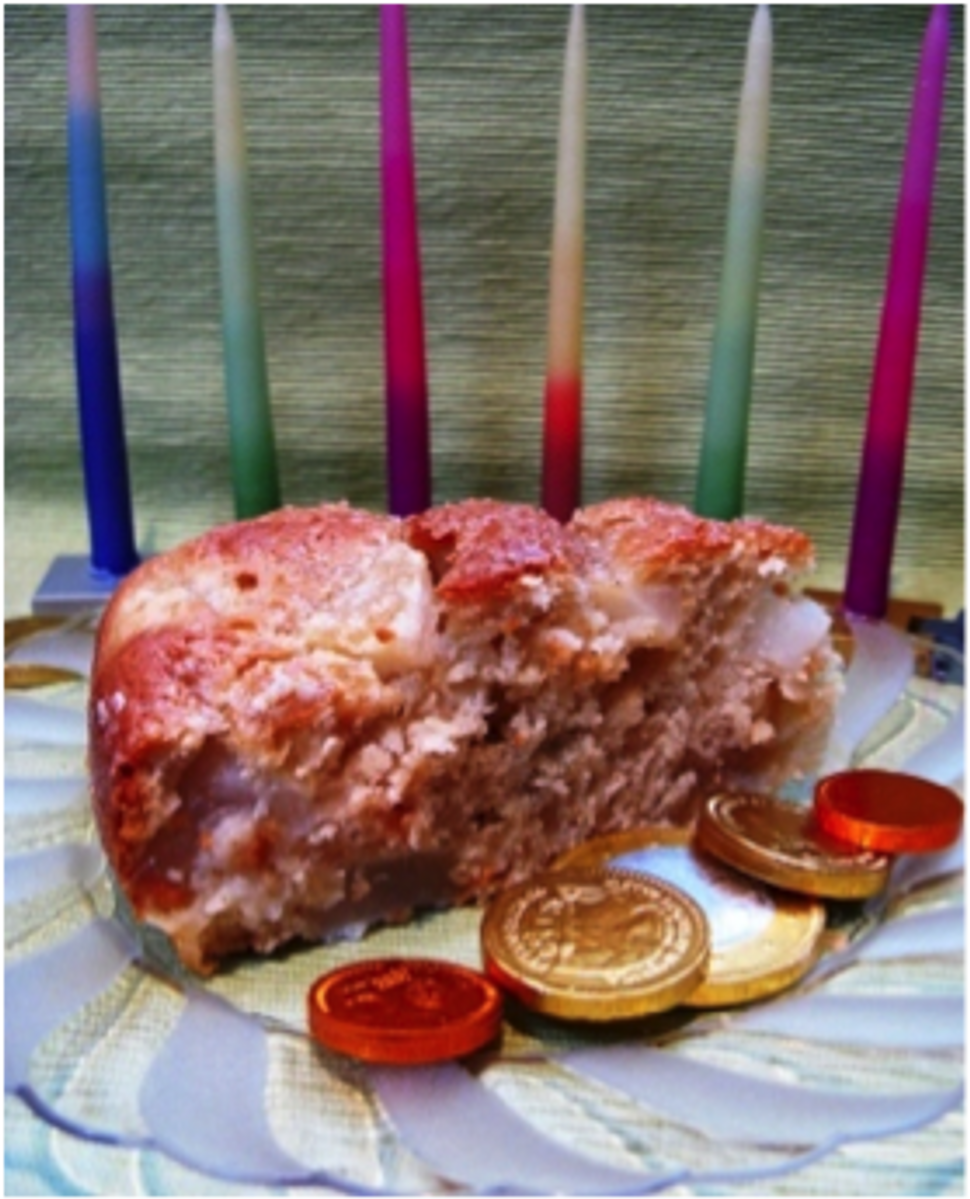 Culinary creativity with a frying pan and deep fat fryer notwithstanding, I love the classics. Hanukkah is a great time to be near my kitchen, particularly when puffy doughnuts have just been injected with jelly. I also make great potato latkes – lots of them.

When finally I can’t ingest another fried bite or just want something a bit more refined, say for Shabbat dinner, it’s time for baking. That’s when I turn to olive oil which is perfect in a cake with organic pears from the farmers’ market.

The history of olive oil in Jewish cuisine dates to biblical times. The Torah describes breads, cake, and daily meals made with it. The rabbinic sages teach that the taste of manna, which sustained the Israelites for 40 years in the wilderness after exodus, was “like the taste of a cake baked with oil.” (BT Yoma 75a) Archeologists have found evidence of olive oil production in the region in the 6th century BCE.

A beautiful cake made with olive oil and served during Hanukkah is something special. It can be hard to find dessert recipes that originally were made with olive oil in contemporary Jewish cookbooks. Often they’ve been modified to suit American palates, which are unaccustomed to the olive oil’s distinctive flavor in baked goods.

Olive oil, like wine, has become widely available in a range of styles and prices. Flavors vary from intense to mild and peppery to fruity. Use an extra virgin or light (same fat and calories, but an even finer filtration process) variety for baking. Try substituting olive for vegetable oil or replace up to half of the butter or margarine in your recipe with an equal amount of olive oil.

Olive oil cakes have been featured in Saveur, on the Food Network and by Tasting Table this year. Home cooks who like being on trend might like to try one for Hanukkah for that reason alone. But really, it’s a taste of heaven.

2) In a large bowl, whisk together the eggs, water, oil, and lemon zest until thoroughly blended.

4) In a separate bowl, sift together the flour, baking powder, salt, and cinnamon. Combine with the egg mixture, stirring to form a smooth, thick batter.

5) Remove the cores from the quartered pears. Slice the quarters lengthwise then cut each piece crosswise into ¼-inch slices. Add the pear slices to the batter and stir gently until completely combined.

6) Spoon the batter into the prepared pan and spread evenly. Sprinkle the top with 2 tablespoons of sugar. Bake for 45-50 minutes. Cool and remove from the pan.

Rebecca Joseph, “The Rabbi Chef,” is founder and owner of 12 Tribes Kosher Foods (@12tribesfood) in San Francisco and creator of The Parve Baker, the original kosher dairy-free baking blog.