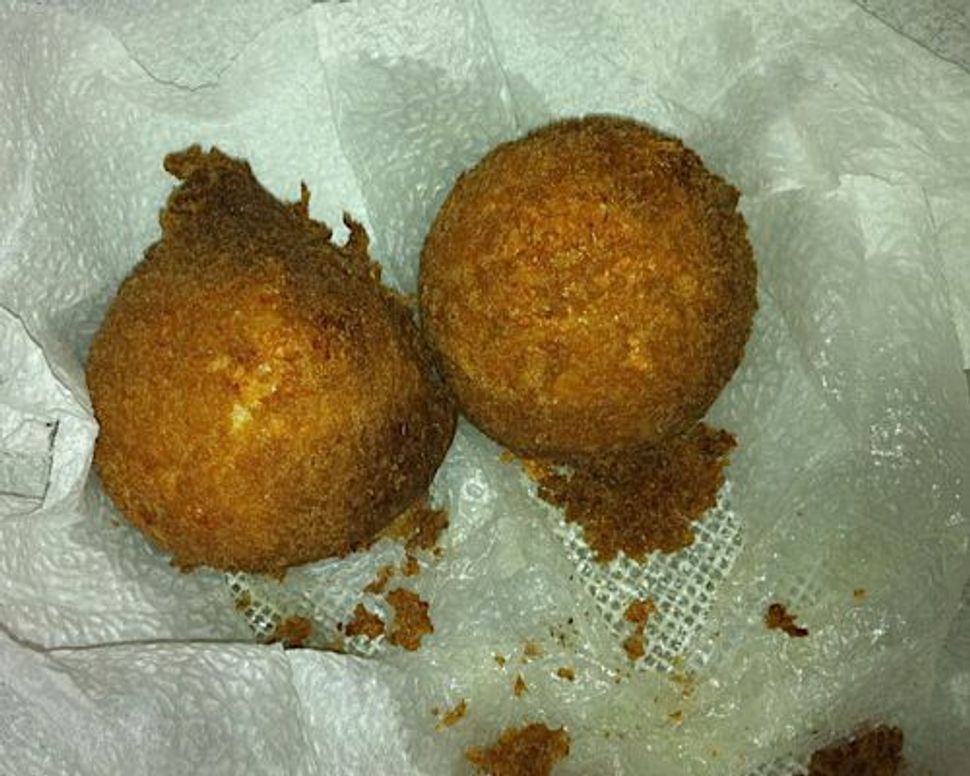 One of my most cherished childhood memories is Christmas Eve at my aunt Carmenza´s house. There, among family and friends, she would produce an endless parade of the traditional Colombian dishes for the holiday. Chief among them, were delicious, golden, crispy buñuelos, savory deep-fried balls of heavy cheese dough, often served as a snack or as part of dessert on Christmas Eve.

Buñuelos were then for me, as they still are for most Catholic Colombians, the quintessential flavor of Christmas. So strong was my association of this dish with the holiday, that for many years after my conversion to Judaism I avoided eating them or making them, as a way to not celebrate Christmas.

Living now in the wind-swept plains of Oklahoma, I was very surprised when I recently discovered that my quintessentially Colombian buñuelos were, with some variations, a Sephardic staple for Hanukkah. Throughout the world wide Sephardic Diaspora, Jewish communities have enjoyed for centuries their vimielos, bunyelos, or bunyols on the Festival of Lights. The recipe and the filling changes as much as the name. Some communities have them with jam, some have them with syrup, some recipes don’t have cheese, some do. The only constants are the oil, the spherical shape and their timing: Hanukkah.

Several questions accompanied this discovery: How did a Sephardic dish cross the oceans and establish itself firmly as a Christmas staple for every Colombian (and Mexican)? Is this another example of the many ways in which Jewish culture, through Crypto-Jewish immigrants, helped shape and form Latino culture? Was the buñuelo in December a clever way of retaining Jewish identity, changing the holiday but preserving the dish and the timing? On and on my imagination continued to entertain these Crypto-Jewish fantasies.

Suddenly, a startling thought came to mind: what if the buñuelo was not a kosher dainty posing as a Christmas dish, but a Spanish dish that had become a Jewish staple? Could these golden balls of bliss be a gift of the Spaniards to Jews and not the other way around? Could it be that the buñuelos had been an import to Judaism, in the same way that we adopted the sufganyia from our Eastern European neighbors, who called them pączkis and ate them during Easter?

I haven’t found an answer to my question. As with every emblematic cultural element, many peoples and communities, down to little towns or neighborhood will proudly declare – and defiantly defend – that they invented it (whatever it is) and that the rest of the world is just copying their time-hallowed formula. Trying to solve these feuds is often as pointless as trying to settle which little restaurant invented (or perfected) Kansas City BBQ or New York style pizza.

Nevertheless, the existence of these commonalities that transcend faith and geography can lead us to a surprising and unexpected conclusion: the lights of unity and understanding (or peace and goodwill) may not necessarily be hidden in big words and powerful beliefs, but in the small things like food that we share as human beings, getting together with friends and family to bite into that golden crispy ball of heaven. These small things are, indeed, our common heritage, our common ground, our birthright as human beings.

Thus, this Hanukkah, for the first time since my conversion, I will fry buñuelos with reckless abandon. Furthermore I will feed them to my daughter who will come to love them as a Hanukkah dish meant to remind us, in their unctuous oily glory, about the lamps that burned miraculously for eight nights. In the meantime, my family back home will fry them in abundance to celebrate together, as they have always done, their impeccably traditional Colombian Christmas.

1) Mix all the ingredients (except the oil) thoroughly until the dough is homogenous and soft.

2) Make the dough into golf ball or slightly larger sized balls being careful not to squish the dough. Fry them in lots of oil at medium temperature. (The best way to measure the temperature is dropping a small piece of dough into the oil. If it stays in the bottom, the oil is too cold. If it rises immediately to the surface, it is too hot and the buñuelo will be raw inside. When the temperature is right they will rise slowly and roll in the oil cooking evenly.)

3) When golden they should be taken out and drained on paper towels.

Note: buñuelos can be served as a side dish to creamy desserts (like flan or cheesecake) or they can be enjoyed on their own with hot cocoa, tea or coffee.