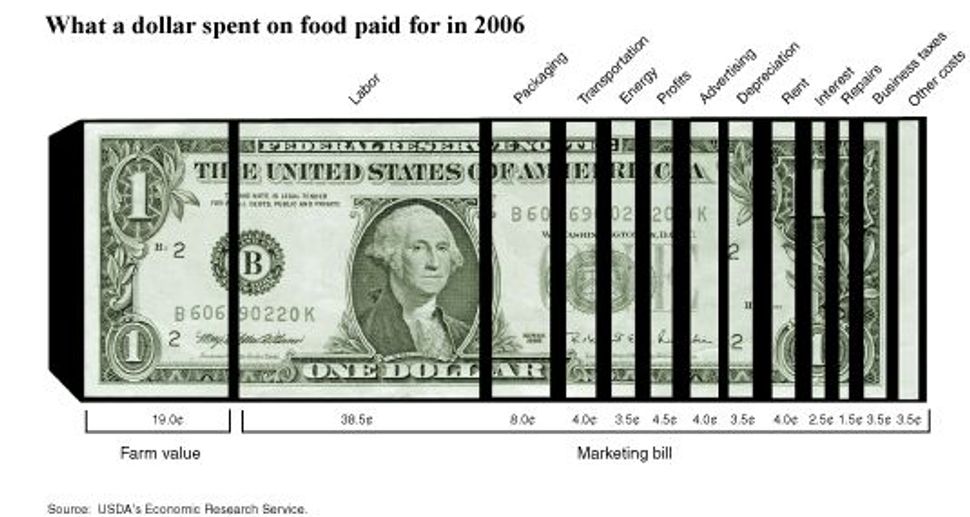 As we kindle the Hanukkah lights, eat greasy foods, and exchange presents with loved ones during this season, it is sometimes easy to forget about how powerless the Jews must have felt prior to their victory in the Hanukkah story – regardless of which version of the story you believe. In our present day Jewish discussions of food issues, rarely do we consider power as the primary lens by which to judge the food system. Yet, many of the most persistent and pervasive challenges to a sustainable, healthy and equitable food system exist because of the consolidation of power.

While the United States has anti-trust laws intended to reduce monopolies in the marketplace, these laws have rarely been enforced when it comes to agriculture, allowing companies to dominate an unfair market. For the first time in decades – after years of complaints and advocacy by farmers and groups like the National Family Farm Coalition – the Department of Justice, in conjunction with USDA, is investigating whether US anti-trust laws are being violated by the agriculture sector.

Starting with an open request for comments from the public, which can be viewed online, the USDA and DOJ have been seeking input from all impacted stakeholders, including farmers and consumers. This has been followed by a series of anti-trust hearings on concentration in the agriculture sector, which began in March and conclude this Wednesday, December 8th with a final hearing in Washington, DC. While the hearings themselves are a positive sign for supporters of small farms, healthy food and sustainable agriculture, the outcome is likely to be gradual and moderate improvement.

It will be an uphill battle for small farmers and conscious-minded consumers. The influence of consolidated power has snowballed, increasing the power of the very industries that adequate anti-trust enforcement would impact. In the highly concentrated markets which underpin the US agriculture sector, this has led to a number of egregious problems our food system faces, from food safety recalls to the ubiquity of processed foods to substandard wages for farm labor.

Since an industry is generally considered to function like a monopoly when four companies control over 50% of the market, the beef industry is often considered to be the most concentrated sector in food; 80% of the market is controlled by just four companies, Tyson, Cargill, National Beef Packing Co, and JBS Swift. The latter of the four was actually sued by the DOJ in 2008 after it took over Smithfield beef and tried to acquire National Beef Packing Co, which would have further consolidated the market.

A similar concentration and monopolist practices exist in the seed, dairy, poultry and other industries, which, taken together make up the backbone of the US agricultural economy. Major players in the dairy industry, including Dean Foods, Kraft, Land O’Lakes and the Dairy Farmers of America have already been the subject of multiple investigations for price manipulation, in addition to the hearing on concentration in the dairy sector this past June.

Price manipulation not only affects consumers. Monopolies and near-monopolies allow the companies that purchase raw materials from farmers to set the prices that they pay low enough so that it’s nearly impossible for farmers to change which crops they plant or the amount, what animals they raise, or how they raise them – without plunging themselves deeper into debt. This, in turn, leads to a lack of choice for consumers at the supermarket and a lack of access to healthy food for some, not to mention the impact of low farm prices on the wages paid to workers on farms and in meat processing facilities. While the other hearings were dedicated to particular sectors such as dairy and poultry, this final hearing is focused on these discrepancies between the prices received by farmers and the prices paid by consumers.

The hearing presents an opportunity for both farmers and consumers to weigh in with the federal government about how the concentration of power in the agriculture sector impacts their lives and livelihoods. A 2-year old organization, the US Working Group on the Food Crisis, has been organizing heavily to ensure that the voices of small farmers, consumers and other stakeholders are heard at the upcoming hearing. As part of the efforts of this and other advocacy coalitions, several websites have been created providing the latest research demonstrating concentration in the agriculture sector and offering the public sample letters that can be submitted directly to the Feds to register complaint with the state of corporate concentration. For the 2 million farmers and 300 million consumers across America, there is hope that sustained efforts such as these will one day lead to a victory over the few giant food companies. That’s a victory for anyone shopping for food, just as much as it’s a victory for small farmers, one we all want to start celebrating.

Aliza R. Wasserman studied food and agriculture policy and works for a local public health department. She is the founder of the three-year old “Farm-to-Shul” effort based at the Moishe Kavod House in Brookline, MA.