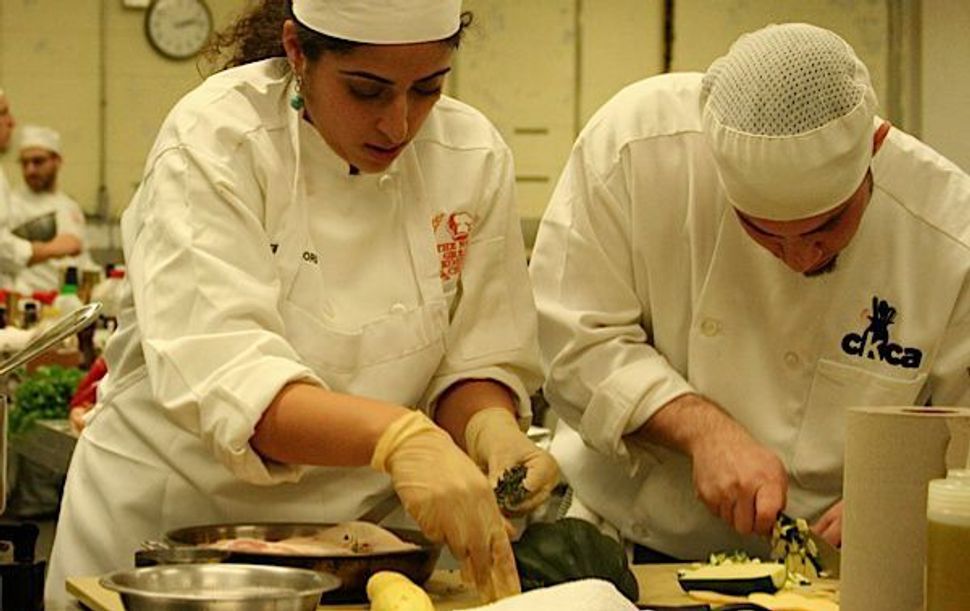 There is more to cooking than food, three home cooks and passionate foodies discovered on Sunday. The Next Great Kosher Chef competition, the first of its kind, was hosted by The Center for Kosher Culinary Arts. With gruelling written and physical parts of a eight-hour competition the heat was definitely on.

The prize: A scholarship to attend the school’s cooking program, valued at $5,000.

Want-to-be contestants first had to send in a short video and a personal essay. Of hundreds, ten were chosen for interviews. Three finalists took part in a televised elimination process. At 8 A.M. Sunday morning they began a written exam, with questions covering a variety of related topics such as “What temperature does water boil in Denver, Colorado? (answer; 203 F because of the different atmospheric pressure of a higher altitude.) A series of five surprise culinary challenges (julienne carrots, scale a fish and whip eggwhites to a stiff peak for example) followed. Then the competition culminated in a cook-off.

The participants had to endure a bit of good-humored intimidation, a staple of many professional kitchens. The chefs made sure the contestants felt the pressure of the competition at every moment. Even during the written exam, “I felt the chefs standing right over me,” said contestant Josh Pashman, 32, whose background included cooking for his wife in their Upper West Side apartment.

Another contestant, Batsheva Goldstein, may be capable of cooking for a full table of Shabbos guests with her eyes closed but Sunday’s challenge took her passion to a new level. A nurse four nights a week and a mother of two, she is no stranger to long days and being on her feet. One challenge was to see how many eggs each contestant could fry, over-easy, plate and garnish. Goldstein whipped up twice the amount of other competitors, but under the scrutiny of the two chefs, only half were considered “perfect,” with intact but runny yolks.

The climax of the event was the cook-off. Contestants were given a “surprise box” of chicken thighs, acorn squash, yellow summer squash and a selection of other produce and grains, and asked to create a main dish with two sides.

Each dish was tasted by the three “celebrity guest” judges: Elan Kornblum, editor and publisher of Great Kosher Restaurants Magazine, Jamie Geller, author of Quick and Kosher: Recipes from the Bride Who Knew Nothing, and Seth Warshaw, chef/owner of ETC Steakhouse in Teaneck, NJ. Goldstein pureed the squash with a little honey and served it under the chicken, while Pashman spiced his chicken with citrus, cubed the squash, and sautéed it with raisins and walnuts. Jasmine Einalhori, 22, of Los Angeles, sprinkled her plate with tumeric and paprika, adding vibrant color before covering it with thyme roasted chicken, large thinly sliced pieces of acorn squash and a rice dish.

To add to the drama, we even saw quite a bit of blood from the only male contestant. Almost emerging from the competition with two fewer fingers, thanks to a sharp-bladed mandolin, Pashman had to endure half the day’s challenges with a big wad of bandage around his thumb, covered with a latex glove. “It’s fine!” he assured “I don’t have time to get stitches.” Although a bit of a disappointment for Pashman, he can comfort himself knowing that his chicken was agreed to be the tastiest dish and scored the highest with all of the judges. Alas, it was only one dish — and only one part of the very long and very eventful day.

Einalhori, the winner of the competition, was full of energy as she ran around the kitchen. “Where’s the colander?” she demanded of her assistant, and “Where’s the salt?” Einalhori made it a personal challenge to go back to her Persian roots and make “Safta’s cranberry walnut rice” as one of the side dishes. “I have never been able to do that rice properly. You have to be old to know how to make that stuff. But this time, it was perfect.”