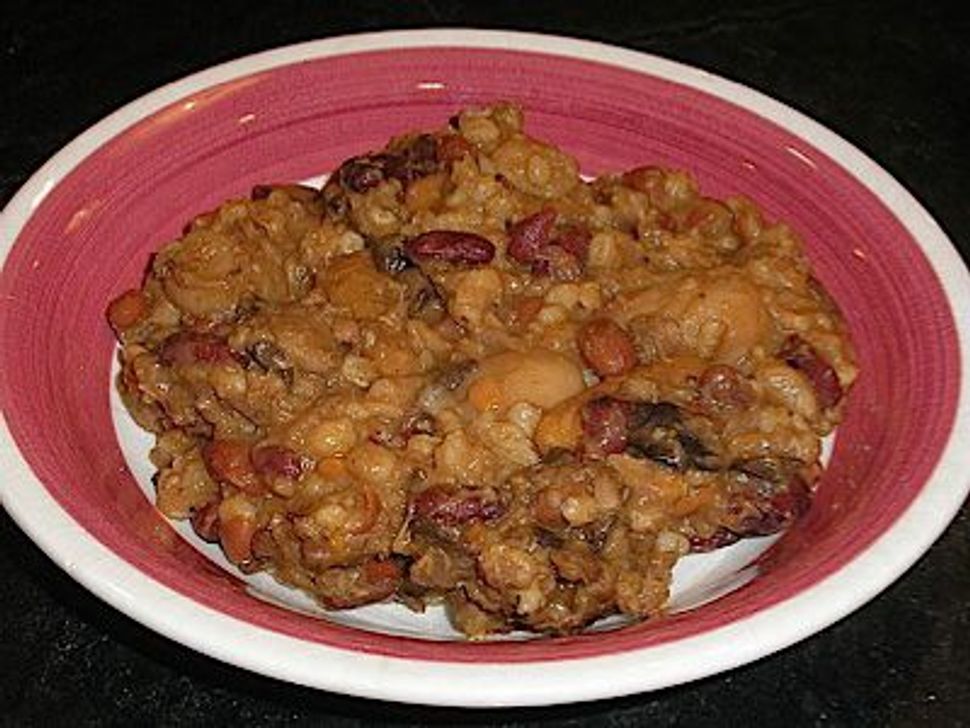 Nowhere do form and function meet so well as in a warm bowl of cholent. The hearty Sabbath stew known by an endless array of names and flavors in Jewish communities around the world is essentially an outgrowth of two seemingly opposing forces: The Jewish laws prohibiting cooking on the Sabbath and the encouragement offered by the rabbis in the Talmud to have a hot lunch on Saturday afternoon. These dishes cook sleepily at low temperatures from Friday afternoon onward, coming together brilliantly right on time for post-synagogue feasting.

Cholent has even been somewhat in vogue of late, with Saveur and the New York Times recently publishing updated recipes for the Eastern European varieties.

The word cholent, probably stemming from the Old French term chald/chalt meaning warm, and lent, or slow, refers to the Eastern European version of this dish. Its origins date back to the Talmudic period and possibly before, most likely becoming common in Medieval France, inspired by the French dish cassoulet. Many Jews who were expelled from France in the 14th century fled to Germany where the term for the stew was morphed into the Yiddish, cholent. Today, the Ashenazic variety of the dish generally contains potatoes, barley, meat, beans and some salt and pepper for flavor.

Like most Jewish foods, slow cooking Sabbath stews riff on local ingredients and cooking styles while remaining within the boundaries of Jewish dietary and holiday practices. In the Sephardic tradition, adafina (the name stems from the Arabic word for buried, invoking the Mishnaic phrase “bury the hot food”) can be made sweet or savory, featuring honey or harissa and always chickpeas, eggs, beans and meat.

Italian hamin, shows off the brightness of Tuscany, integrating sage, white beans and swiss chard alongside chicken meatballs, onions and garlic. Hamin is another Sephardic name for the stew, and the word derives from the Hebrew word ham for hot.

Italian Jews also make stracotto, a beef stew or pot roast with wine and tomatoes that is eaten both as a shabbos lunch and as a Friday night dinner. Celeste Pavoncello Pipenro, 53, of Rome recalls eating stracotto throughout her life, “I remember Grandmother Celeste cooking stracotto in a special crock pot that she used just for this dish. It was very important to her to cook the stracotto in the crockpot. Also, my father Marco cooks the stracotto quite often, he puts some chocolate in with the meat just to add a different flavor.”

Iraqi Jews have their own take on Sabbath slow cooking. In “Mama Nezima’s Jewish-Iraqi Cuisine” cookbook, Rivka Goldman writes, “No Jewish Iraqi Sabbath table is complete without tebit.” Also spelled taybit and taybeet, the dish is more chicken and rice dish than stew (though cookbook author Claudia Roden mentions a stew variation in her “Book of Jewish Food”), it functions similarly to a slow cooking item to be eaten for Shabbat lunch. Composed of chicken stuffed with meat or rice, spiced with cardamom, nutmeg, cinnamon, pepper and paprika and surrounded by rice, the true beauty of tebit is in its unmolding. Roden describes the process by saying, “At lunchtime on Saturday, the steaming pot was placed in cold water to help unstick the rice from the sides and turned out like a large cake with the chicken inside.” Hint: the crusty bits of rice that cling to the top are considered the favored part.

In the Ethiopian tradition are wots, stews that function as the national dish of the country. Sanbat wot refer to stews made especially for the Sabbath by Ethiopian Jews. While these stews are at the center of daily Ethiopian meals, “Even those who cannot afford it make a special effort to have a little chicken or meat in their Sabbath wots,” to elevate their Shabbat meals, according to Gil Marks in his “Encyclopedia of Jewish Food.” Always served with the spongy sourdough bread injera, wots are also often characterized by berbere, a notoriously spicy Ethiopian chili sauce.

Whether or not Shabbat observance is part of your tradition, the eclectic and endless variations of this nap-inducing ancient Jewish tradition are a perfect way to fill cold bellies during the winter months. Below, two recipes from the cholent universe.

1) To make the meatballs: combine all the meatball ingredients and form into ½ inch balls.

2) To make the greens, separate the chard leaves from the stems. Cut the tender stems into 1 inch pieces. In a large saucepan, heat the oil over medium heat. Add the onion and garlic and sauté until soft and translucent, about 5 minutes. Add the chard and sauté until wilted. Top with the meatballs, cover, reduce heat to low and sauté until the chard is tender and the meatballs are cooked, about 20 minutes. Let cool, then refrigerate until shortly before using.

3) To make the hamin: In a large heavy pot heat the oil over medium heat. Add the onions and sage and sauté until golden, about 15 minutes. In the order given, add the bones, beef, beans, salt and pepper, and enough water to cover. Bring to a boil, cover and simmer over medium low heat or bake in a 375 degree oven until the beans are nearly soft, about 1 ½ hours.

4) Add more water if necessary. Cover the pot tightly. Put on a blech (metal tray) over low heat or in a 200 degree oven and cook for at least 6 hours or overnight.

5) Shortly before serving, stir the meatballs and the greens into the hamin and let sit until heated through.

2) Heat the vegetable oil in a pan over high heat, add the onion. Reduce heat to medium. Stir in the meat and half the spices, and cook for 5 minutes. Stir in the rice and tomato, for 1 minute, and remove from heat.

3) Stuff the chicken with the meat mixture. Sprinkle the remaining half of the spices over the chicken, and place the stuffed chicken in a roasting pan.

4) Heat the vegetable oil in a pot over high heat and add the onion. Reduce heat to medium and stir in the tomato sauce and 4 cups of water. Add the salt, garlic powder, lemon juice, and rice ad remove from heat.

5) Pout the rice mixture around the chicken. Cover with aluminum oil and bake for 8 hours or overnight at 200 degrees.