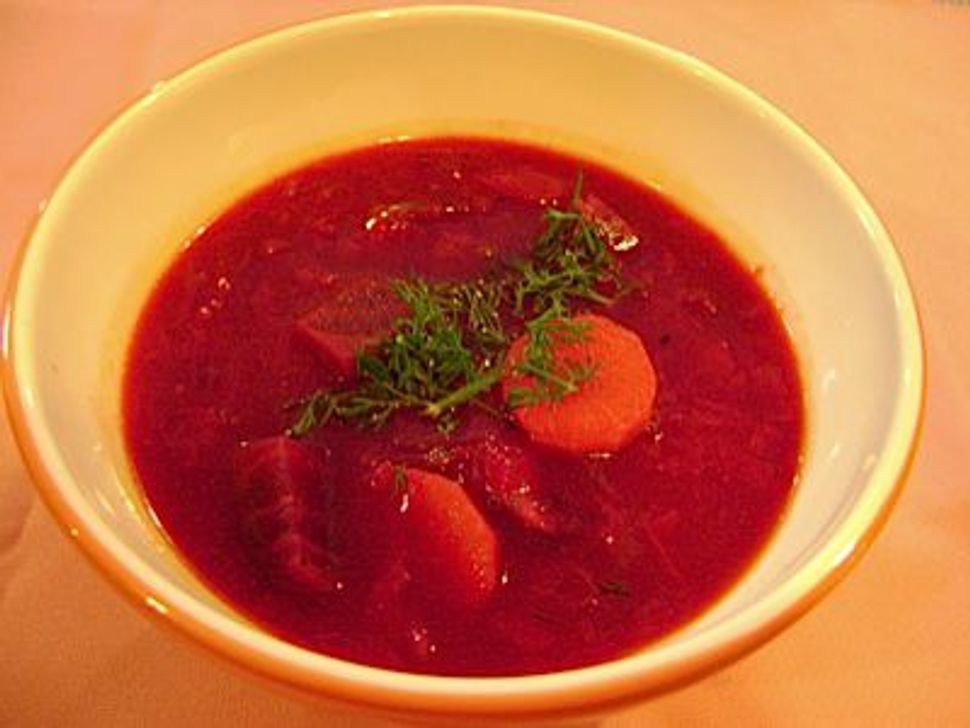 “The perfect borscht is what life should be but never is,” writes Alexandar Hemon in The New Yorker food issue this past November. Until recently, I simply figured I’d never tasted “the perfect borscht.” My first impression of the Eastern European delicacy was the purple liquid my father would buy once a year on Passover. On the second or third day, after having his share of matzoh, he would take out the glass Manischewitz bottle of purple borscht and mix it with just a bit too much sour cream. While he always offered us a taste, my siblings and I would politely decline.

Yet, when my mother and I found ourselves in Moscow and Kiev last month, I decided to give it a second chance, this time fresh from a simmering soup pot instead of the jar. Borscht in Yiddish or bohrshch in Russian (there are many spellings – it’s the food equivalent of the word Hanukkah), loosely translates to a soup with a beet base. In Moment magazine, cookbook author Joan Nathan explains that in the 18th century, before potatoes were the food of the masses in Russia and Ukraine, red beets made up much of the local diet.

Served hot in the winter and cold in the summer, traditional borscht used fresh beet juice as its foundation and could be found on dinner tables throughout the two countries. Jews began to adapt recipes to make the soup kosher, substituting beef for pork and sometimes making it vegetarian so that sour cream could be added.

A few years ago, the British journalist James Meek set out to discover what happened to borscht after the collapse of the Soviet Union. His travels led him to amusing tales that chronicle the origin and development of this Eastern European staple. He suggests, among other things, that borscht is Ukrainian and not Russian and while Jews adapted borscht to confine to dietary concerns, other adaptations outside of the Jewish community abound as well.

In 2004 a popular Russian chat room – “LoveTalk” – launched a thread with the heading “What is borscht? Does it have to contain beetroot?” According to Meek, the discussion exploded and lasted more than a month, with divisive opinions on both sides. In addition to saying the beetroot was unnecessary for borscht, users listed other unconventional ingredients like pickled apples and paprika.

This removal of beet from borscht perhaps explains why white borscht – which, as demonstrated by its white color doesn’t contain any beets – can still be called borscht, a seeming misnomer. This Polish adaptation often uses a base of fermented rye instead of beet stock and in Poland it is known as zur (rye meal soup) or bialy barszcz (white borscht). It is traditionally served on Easter with a cubed rye bread and hard-boiled eggs added to the broth. There is of course still a beet-based version in Poland simply called barszcz.

While I can’t vouch for the Polish rendition, the hot borschts I tasted in Moscow and Kiev were perfect for a winter evening. While in most restaurants it is prepared with a meat stock – my favorite borscht came from a small dairy restaurant called Café Yael based in the Marina Roscha JCC of Moscow. It used mushrooms for its base and was completely vegetarian. Feel free to add a dab of sour cream to complete the dish and to discover what life should be, but never is – rich and colorful, but also subtle and sweet.

Borscht with Cabbage and Mushrooms

1) Wash beets well and place them in a large pot covered with water. Bring the water to a boil and simmer the beets, uncovered, for 50 minutes.

2) Drain and cover the beats with lukewarm water to cool. When cool enough to handle, use your fingers to slip off the skin – make sure all the skin comes off. Dice the beets and set aside.

3) Place a large pot over medium heat and sprinkle with the 3 tablespoons oil. Add the onions stirring occasionally.

5) Add the broth and bring to a boil. Reduce the heat and let simmer, uncovered, for about 30 minutes.

6) Season with salt, mirin, and lemon juice and stir.

Borscht tastes best after sitting for at least 5 hours or over night. When ready to serve, heat up and garnish with fresh dill.