Cooking Shabbos Dinner After the Clocks Fall Back, Part Three 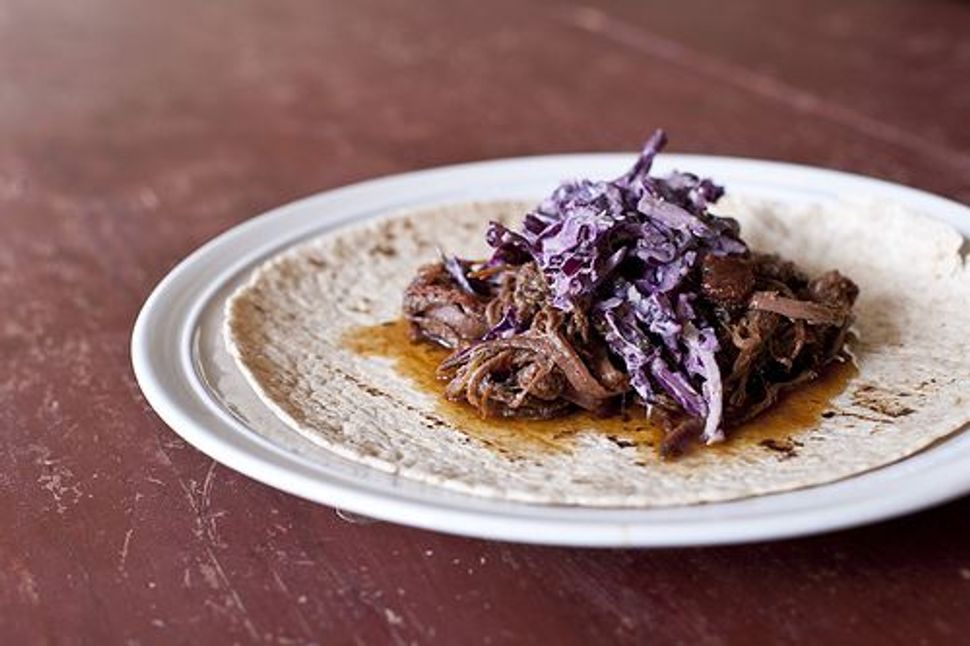 Cooking Shabbos Dinner After the Clocks Fall Back, Part One

Cooking Shabbos Dinner After the Clocks Fall Back, Part Two

We’re used to it by now: the mad dash home on these too-short Friday afternoons. They say the days are getting longer now, but I don’t know. The hours that we optimistically call “late afternoon” still feel like the dead of night. Fortunately, we know what to do. We have Wednesday! We make soup. We have Thursday! We bake a cake. And in that final hour between briefcases down and candles lit, we brown our waiting bird and slide it into the oven to cook the rest of the way through. If, as one reader commented last time we’re lucky enough to have that hour at all. When we tumble through the door mere minutes before the last light slips away, what then?

Enter that darling of Shabbat food prep, the crock pot. When we think crock pot, we typically think cholent, and we typically think Saturday lunch. But we shouldn’t stop there. For a slab of meat that stands up to a good long braise, the crock pot is an ideal final resting place. And Friday night is as good a time as any to enjoy a meal that more or less prepares itself. In fact, it just might be the best. Your work in the kitchen begins and ends on Friday morning, and entails little more than folding a browned brisket into a crock pot and shooting out the door. There are spices involved – cumin, coriander, chili powder – the requisite garlic and onions, a generous pour of molasses, a can of tomatoes, and a chipotle chili to seal the deal. By mid-afternoon, that humble crock pot squatting on your counter will be pumping out the kind of aroma usually reserved for summertime barbeque pits and backyard grills. It’s all the proof you’ll need that you’re having southwestern pulled brisket for dinner.

Braising is something of a secret weapon in the kitchen when you must cook now and eat much later. It’s a cooking method that starts high and dry on the stovetop, with a heavy skillet and a puddle of oil. Once you’ve browned the meat, into the oven (or crock pot) it goes, with its juices and added liquid. The longer a brisket braises, the better it gets. The fat melts from the surface of the cut and slides into the sauce. After eight hours, a fork will disappear into the brisket with the slightest push. After ten, the meat grows so tender, it can barely keep itself together. Pile it into flour or corn tortillas, and top with cabbage and green onion slaw for a welcome crunch.

I like to leave the brisket to braise all day on Friday, and come home to a warm and finished meal. If you prefer to prepare the brisket in advance and reheat it for your Friday supper, then by all means, have at it. Because the brisket cooks slowly, at a very low temperature, it holds on to its moisture, and continues holding on when you reheat it, covered, before serving. Come Friday afternoon, all that’s left to do is count the minutes until you get to eat it.

1) Season the beef generously with salt and pepper. Heat a large, heavy skillet over medium-high heat, and add the oil. When the oil just begins to smoke, add the meat, and brown it for about five minutes on each side.

2) Transfer the meat to a crock pot, and return the skillet to the burner.

3) Lower the heat slightly, add the garlic, onion, chili powder, coriander, and cumin to the drippings in the skillet, and stir until fragrant, about one minute. Add the vinegar, and stand back! Evaporating vinegar is strong stuff.

4) With a wooden spoon, scrape up any brown bits stuck to the bottom of the skillet. Stir in the water, and pour the mixture over the brisket.

5) Crush the tomatoes through your fingers into the crock pot, and add the tomato juices, chipotle chili(s), bay leaves, and molasses. Cover the pot, set it on “low,” and leave the brisket to braise for 8 to 10 hours. (I prefer the longer cooking time.)

6) When the brisket is done, use two forks to pull it apart in the crock pot. Stir the pieces of meat into the sauce. Remove and discard the bay leaves, and season with salt and pepper, to taste.

1 cup green onions, coarsely chopped
¼ cup red wine vinegar
1-2 serrano chilies, split in half (you can remove some or all of the seeds to mellow the heat, if you want)
2 tablespoons mayonnaise
Salt and pepper
½ cup pure olive oil
1 head purple cabbage, thinly sliced (I like to use the slicing attachment on my food processors, but you can also do it by hand)
1 small red onion, halved and thinly sliced
¼ cup chopped cilantro leaves

1) In a stand blender, blend the green onions, vinegar, chilies, mayonnaise, oil, and a pinch or two of salt and pepper until emulsified.

2) Place the cabbage, red onion, and dressing into a large bowl and stir.

3) Fold in the cilantro, and season to taste with additional salt and pepper.

*Jessica Fechtor writes the food-inspired blog, Sweet Amandine, and is a PhD candidate in Yiddish literature at Harvard University.

Cooking Shabbos Dinner After the Clocks Fall Back, Part Three