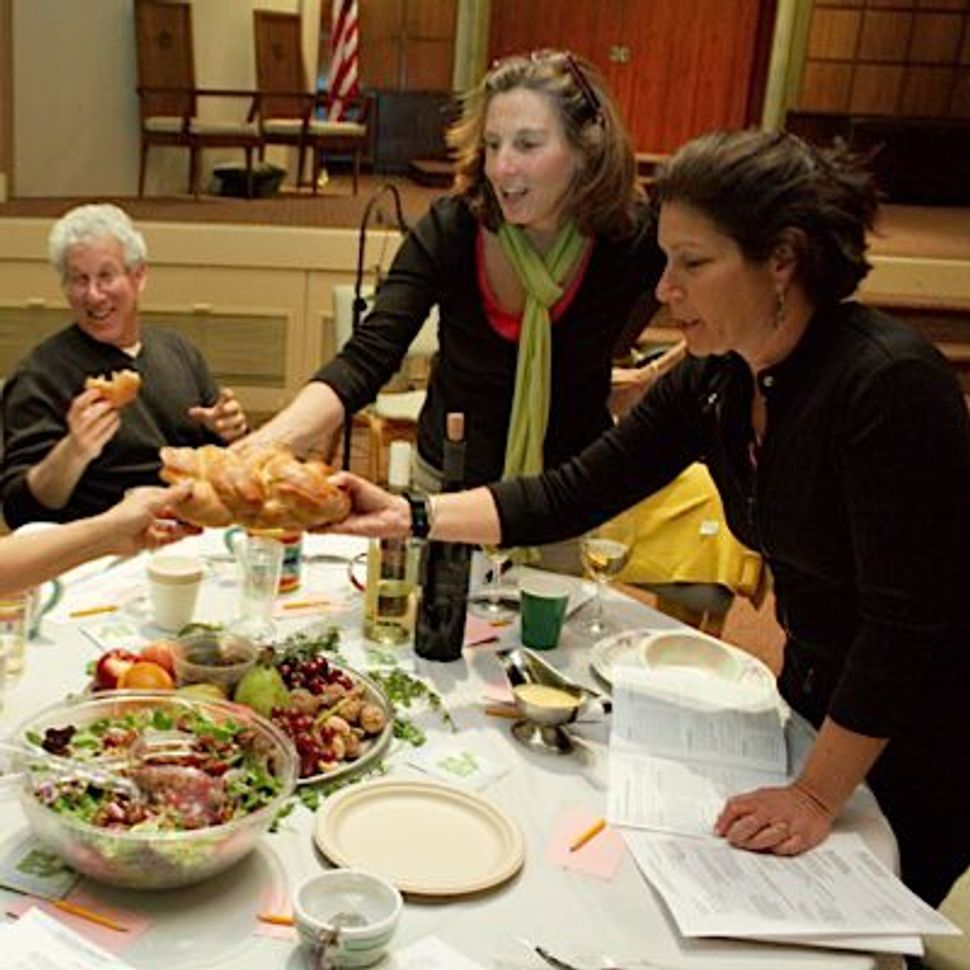 Tonight, Jan 19th, there’ll be a full moon in the sky: the full moon of the Hebrew month Shvat. The indigenous Israelites from whom we descend celebrated this as the start of the year for the natural world. Like lots of elements of Jewish tradition, we never forgot it, even as its meaning has changed over time.

Tu B’Shvat’s a great holiday, and there’s every likelihood there will be a record number of Tu B’Shvat seders this year, including many being hosted by Moishe Houses and Birthright Next, around the country, using Hazon’s Tu B’Shvat Haggadahs. (You can go to one, or you can create your own.)

But one thing worth thinking about afresh is the question of what food you serve at a your Tu B’Shvat seder.

There’s a tradition of eating shivat haminim — the seven species, indigenous to the land of Israel, that are mentioned in the Torah. Four years ago, on the first day of Hazon’s Israel Environmental Bike Ride, we rode from Jerusalem to Ashkelon — and passed all seven, growing along the way. That’s one of the ways that we’re truly connected to the indigenous roots of our ancestors.

But how to square one value — connection to the land of Israel — with another value: the localism espoused by people like Wendell Berry, Alice Waters and Michael Pollan?

The question is both a practical and a symbolic one.

How does a commitment to localism fall inline with a traditional connection to the land, people and state of Israel? Shouldn’t we only eat local foods and not ship olives, dates and figs from Israel? Or the opposite: isn’t the point of Tu B’Shvat that Jews, the world over, celebrate in similar ways, so that all of us are connected not only to Israel but to the Jewish people throughout the world?

The practical question is easily solved. At our Tu B’Shvat seder tonight we’ll have the seven species, but we’ll also have potato chips and beet chips (representative of winter vegetables here in the northeast) and local kosher organic maple syrup, from the Adamahniks at Isabella Freedman and other local foods.

For me, the symbolic answer mirrors the practical one. I love that Jewish traditions are so old. A Tu B’Shvat seder is relatively recent, going back not much further than the late middle ages, and in its current form — with an “environmental” theme — barely 40 years old. But the first reference to Tu B’Shvat is Mishnaic, i.e. 2,000 years old. When we eat the seven species from Israel we connect horizontally and vertically in a remarkable way.

Yet a tradition is not something to preserve in aspic: a tradition should have meaning and moral content to be worthy of taking forwards. Eating local foods — and arguing out the issues — helps remind us that Jewish tradition is a process, not a destination. Our broadest goals are some of the central motifs of the Torah: kdoshim tihiyu (“you shall be holy”) and l’taken olam b’malchut shaddai (to renew the world as a divine realm). Eating locally at our seder table reminds us of our daily choices. Every food we eat is part of a chain of causation, for good or ill, and eating lower on the food chain, eating locally and organically all help us to eat more ethically.

Nigel Savage, originally from Manchester, England, founded Hazon in 2000 by riding his incumbent bike across the US. He worked previously in the English equivalent of Wall Street, and was a founder of the New Israel Fund in the UK. He studied at Pardes, Yakar and Hebrew University. In 2008, he was listed in the Forward-50, the Forward’s annual list of America’s 50 most influential Jews.

If you want to plan your own Tu B’Shvat seder, Hazon has a slew of free resources to help you do so. You can download our Tu B’Shvat haggadah, leaders’ guide, music, videos and a great cartoon from G-dcast for free at tubshva We’re grateful to the Jim Joseph Foundation for supporting this work. Check out the seders that Hazon are sponsoring in New York, San Francisco, and Boulder.