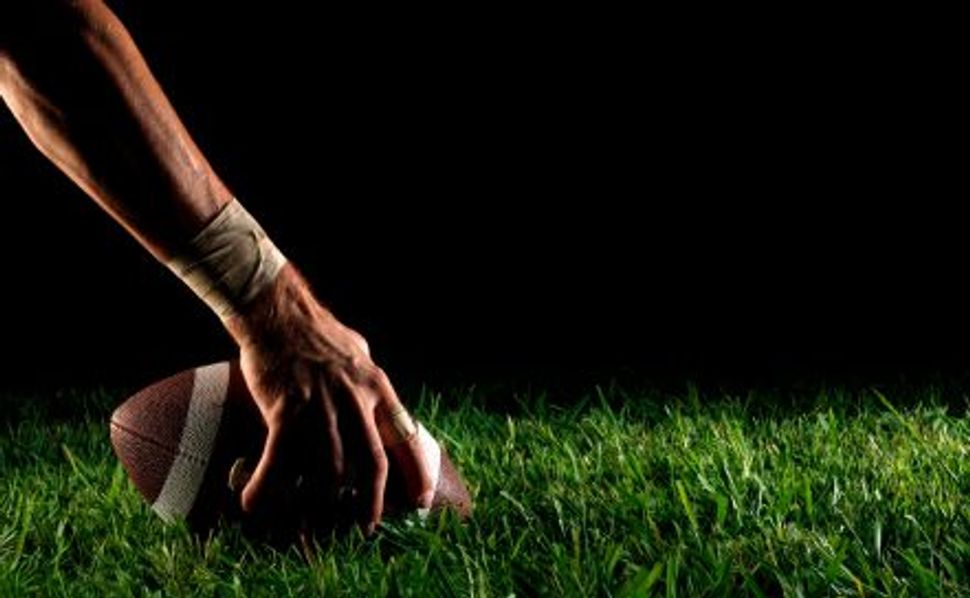 If you think about it, Super Bowl Sunday is a lot like a Jewish holiday — it’s all about the food.

In an homage to the two teams playing in the big game — the Pittsburgh Steelers and Green Bay Packers — we asked three Jewish chefs and a Pittsburgh deli owner to reimagine the teams’ hometown foods, with a Jewish twist of course.

For Green Bay, Wisconsin, the hometown favorites are cheese curds and cheddar cheese.

Pittsburgh’s signature sandwich (treyf as it is), is courtesy of the Primanti Bros. chain of restaurants, and features meat, melted cheese, French fries and coleslaw between two slices of Italian bread.

Follow your stomach’s desire or go with the food in line with your favorite team. But remember, if you eat too much of these, you may find yourself looking like a line backer.

Here’s what the experts came up with:

Eli Kirshtein, a “Top Chef” alum, knows a thing or two about kosher food, having worked at upscale New York City restaurant Solo. In the process of opening his own (non-kosher) restaurant in Atlanta, Kirshtein consults for kosher and non-kosher restaurants. He took on cheese curds.

“I’d make a fun play on poutine. First, you can make a non-meat gravy. Make a roux [learn how, here] with flour and butter and then stir in some vegetable stock and milk over a low flame. You can even infuse black peppercorns and thyme. Then mix in some melted cheese curds* Serve that as a type of fondue, with French fries that you can dip in on the side.”

*Cheese curds are available at specialty stores such as Murray’s Cheese in New York and online too, at Wisconsingoods, Wisconsinmade.com and even Amazon.com. If you can’t get them on time, or require kosher cheese, you can always substitute cheddar cheese.

David Suarez, the Jewish culinary director of the upscale Mexican chain Rosa Mexicano’s offered up a cheese soup which incorporates another Super Bowl staple — beer. Recipe is below.

Jeff Cohen, owner of Pittsburgh’s Kosher-style Smallman Street Deli suggested substituting a Primanti Bros. sandwich with an updated version of the “Rachel,” one of Smallman’s signature sandwiches, which is itself an update on the Reuben (with coleslaw inside the sandwich).

“It would be corned beef on rye with thousand island and coleslaw. But to make it more the Primanti’s version, you can add fries [inside], or, even better, potato latkes. We do that to the Reubens here,” he said.

Ronnie Fein, author of “Hip Kosher,” is an expert at making kosher adaptations of more mainstream recipes. For us she created a “Sort-Of Primati Brothers Sandwich” with soy cheese and corned beef. Recipe below.

1) In a small pot, melt the butter and add the carrots, celery, onion and garlic. Cook slowly until they are soft but with no color.

2) Add the flour and stir over very low heat for five minutes.

4) Add the milk and mustard. Bring to a boil and remove from heat.

5) Add the cheese and stir until it has melted.

6) Add the chipotle and stir until incorporated, re-season if necessary.

For each sandwich, place a slice of Italian bread on a plate. Add the corned beef and top with the soy cheese. Layer the French fries on top, followed by the cole slaw and topped with the tomato slices. Cover with the second slice of bread. Makes one sandwich.

1) Shred the cabbage and onion and toss together into a bowl.

2) In a small saucepan combine the cider vinegar, sugar, celery seed, mustard and vegetable oil and cook over low heat, whisking the ingredients, until they are well combined and the sugar has dissolved. Pour over the cabbage mixture.

3) Toss ingredients, season to taste with salt and pepper and refrigerate until chilled.