Bringing Israeli Breakfast to Your Kitchen 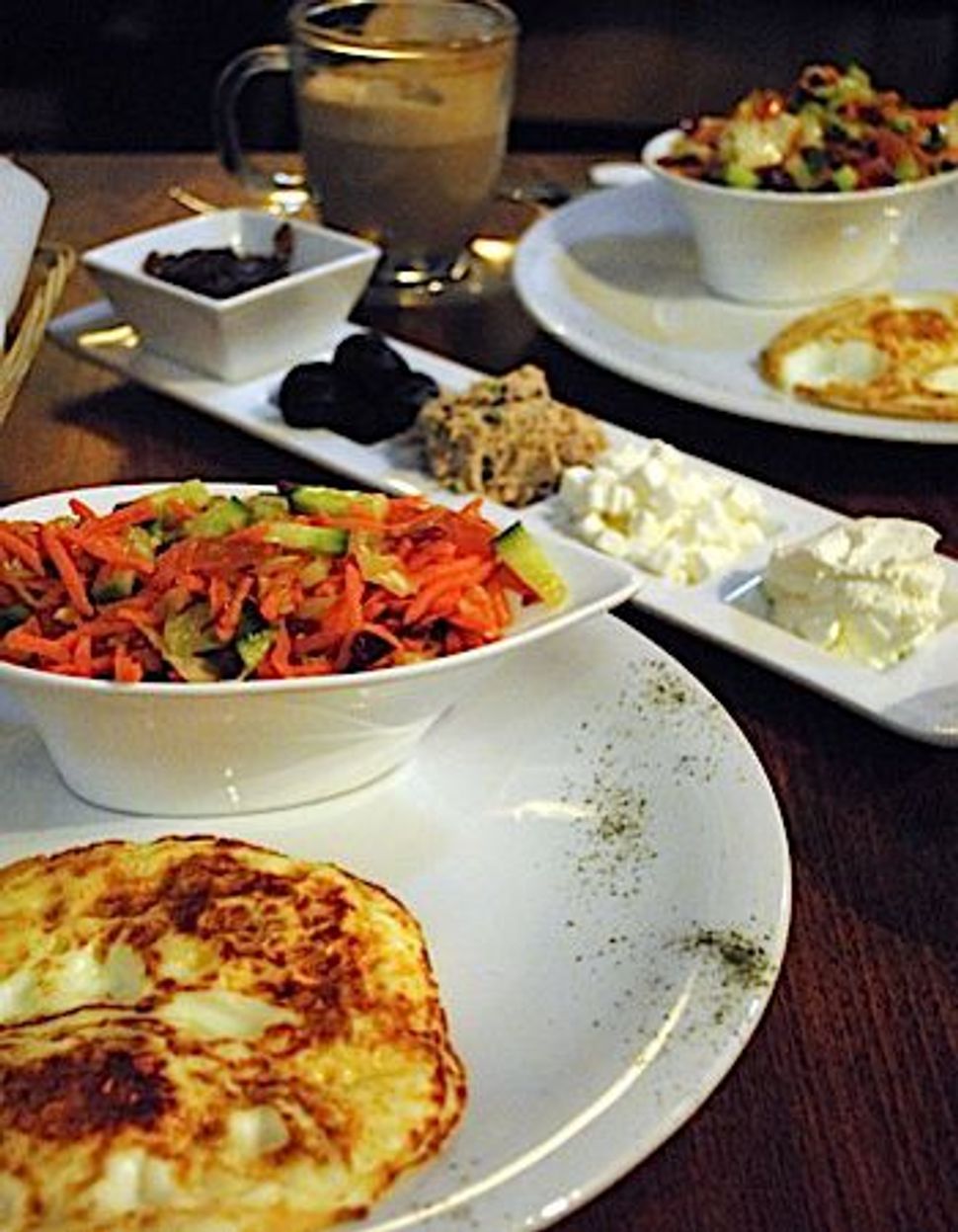 As a young country that is still working to define its culinary culture, Israel has few dishes to call its own. But breakfast in Israel is another story entirely. Italians are known for a quick bite and shot of espresso and Americans love their gluttonous, hung-over weekend brunches (stuffed French toast, anyone?). Israelis, however, strike a balance between excess and health and celebrate the day’s first meal with something all their own.

While any day of the week – and almost any time of the day – is appropriate to indulge in a large Israeli-style breakfast, it is never more of a custom than Friday mornings as a start to the weekend and a break from pre-shabbat errands. In cities across the country locals crowd the cafes to meet with friends and linger over breakfast and coffee.

And lingering is easy to do, seeing as how an Israeli breakfast consists of a mix of upwards of 10 savory and sweet items on your crowded, outdoor table. It is something, though, that can be easily made at home — by anyone, anywhere.

In her tome,“The Book of New Israeli Food”, author Janna Gur explains that “the origin of this unique phenomenon is proletarian: kibbutz workers, who began their day in the fields before 7 AM, gathered in the communal dining room for a breakfast of whatever fresh produce was on hand.” This humble beginning became a national ritual when the first luxury hotels turned the kibbutz breakfast into a “lavish buffet” in the 1950s. In modern day Israel, everyone has their own slightly personalized version of the meal. Hotels dress large buffet tables and upscale restaurant will often put their own fancy stamp on the meal with touches such as house-made pear jam, sea bream ceviche, or fresh baked cinnamon buns.

Some key elements are unchanging though. While eggs were scarce in Israel in the 1950s, they are the base of the modern Israeli breakfast. Often served as a circular herbed omelet. At first glance it may look like this is the star of the show, but any keen observer can see that it is the accompaniments that make this meal special.

It may seem odd to have a salad with breakfast but in Israel the meal is not complete without the distinctive mix of chopped cucumbers and tomatoes. While the salads can also feature carrots, red cabbage, or onion, the base, which highlights fresh local flavors, is practically unchanging. If you are making this on the wintry East Coast, where tomatoes aren’t exactly in season right now, a simple slaw-type salad with sliced cabbage and shredded carrots would make a worthy substitute (see recipes below).

The rest of the table is covered with little bowls of dips and spreads. A small scoop of tuna fish is customary, as is cream cheese, little cubes of Bulgarian white cheese, tahina, a bowl of olives and labne, a thick and tangy yogurt-like base. It is probably the hardest item on this list to find outside of Israel (although specialty markets do carry it), but it is also the easiest to make at home (see recipe below).

A basket of warm rolls or a small loaf of sliced bread will thankfully also grace the table, to serve as a vehicle for all of these fabulous dips. Frequently there is honey, and if you’re lucky, it’s date honey, a thick sweet syrup of dates. Butter and jam may make appearances as well, though more as an afterthought.

The beverages are not the stars of the meal, but they do add to the experience. Israel is a country of coffee lovers, and their specialty is espresso-based beverages, a milk drenched café affuch is a popular choice. And fresh-squeezed juice, whether it be pomegranate or apple, carrot or orange, is one of the joys of life and no one seems to do it quite like the Israelis.

Sadly, it is near impossible to find this meal in a restaurant stateside. But, the secret is, it’s a cinch to make at home, and well worth the minimal effort. All the dips and spreads are great for a crowd, so next time you’re entertaining in the morning consider trying out an Israeli theme.

Line a sieve or colander with four layers of cheesecloth (you can quarter a large piece of cheesecloth) and set it over a bowl. Mix the salt into the yogurt and put the mixture in the cheesecloth. Draw up the corners of the cheesecloth and tightly tie them or secure with a rubber band. Leave it to drain at room temperature 18 to 24 hours, until thicker than Greek yogurt but thinner than cream cheese. Discard the whey or save for another use. Store the labne in the refrigerator.

*Although full fat yogurt will result in a thicker, creamier labne, reduced fat yogurt can be used as well. Additionally, you can use as much or as little yogurt as you like. The final volume will be about one quarter of the original.

Put the chopped cucumber and tomatoes in a bowl and toss to combine. There should be an equal amount of both. Toss with olive oil and/or lemon juice, if desired. Season with salt and pepper.

*This can easily be scaled up or down to serve one or a group. Other additions can also include diced red pepper, chopped red onion, shredded carrots, and chopped parsley, mint, or cilantro.

Put the cabbage, carrot, pepper, and onion in a bowl and toss to combine. Toss with olive oil and/or lemon juice, if desired. Season with salt and pepper.

Bringing Israeli Breakfast to Your Kitchen