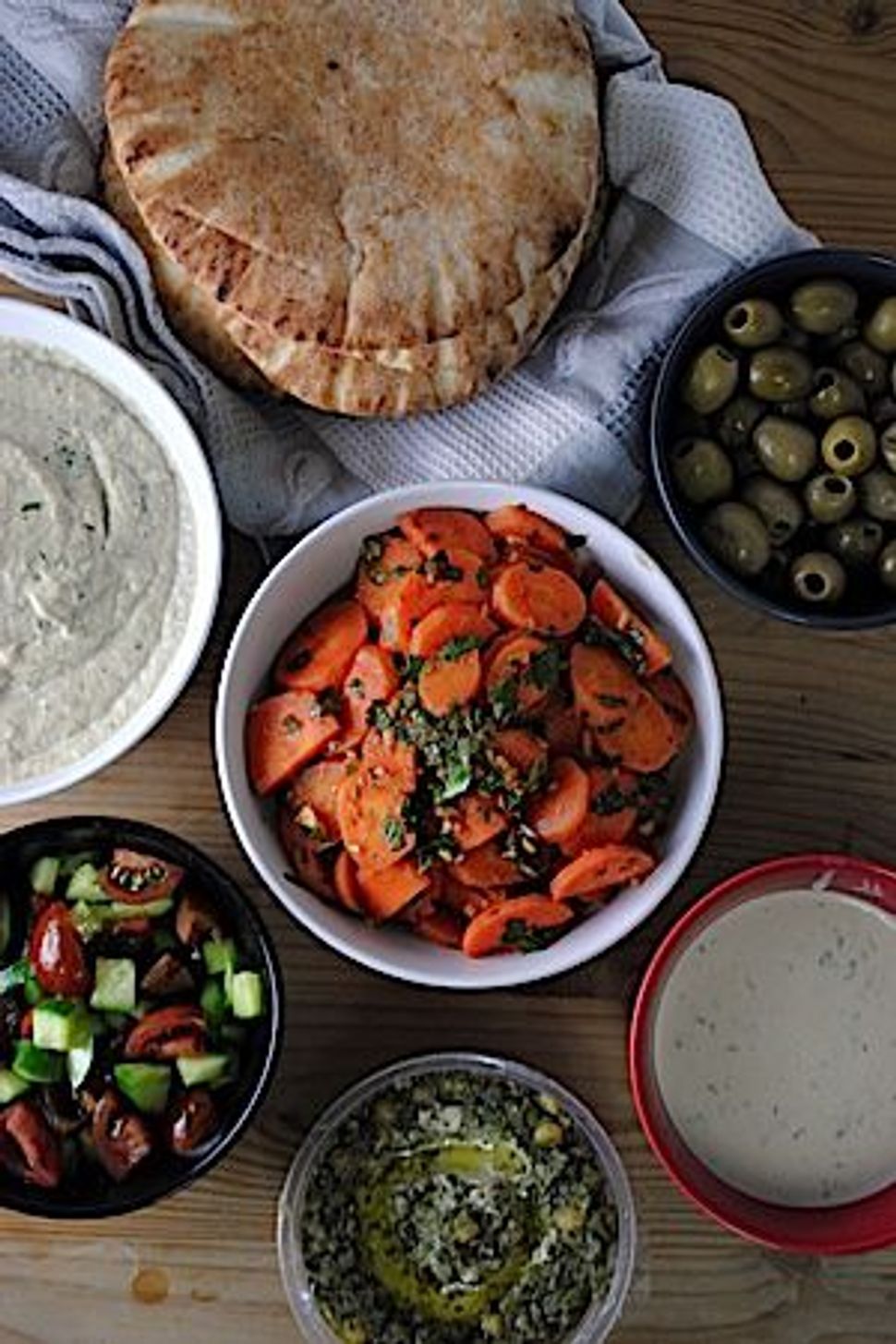 As with so many Israeli customs and foods, mezze brings together multiple culinary traditions, including Lebanese, Syrian, Persian, Moroccan and Turkish. In the “Encyclopedia of Jewish Food,” author Gil Marks traces the mezze tradition to ancient Persia, where the wealthy threw lavish parties and offered lots of little dishes to their guests to help soak up the alcohol. The Ottomans were responsible for spreading this tradition throughout the region. In Israel, bits and pieces from all of the mezze-loving countries have been adopted and absorbed into the culinary cannon for a spread all its own.

There are many components to a full mezze array, and it’s easy to mix and match. Typically six or more small dishes are served at once, along with pita or laffa, a Lebanese or Iraqi flatbread. Unlike breakfast, which is usually dairy, dinner in Israel is often a meat meal and so the vast majority of mezze are conveniently pareve. Mezze also often makes up a dairy lunch meal, in which case a selection of soft white cheeses and yogurt dips are enjoyed.

Often the same ingredient will show up in multiple incarnations with completely different textures and tastes. In “The Foods of Israel Today” author Joan Nathan declares Israel “the eggplant capital of the world,” and nowhere is that more apparent than in the variety of eggplant mezze. Baba ghanouj, a Lebanese eggplant and tahina dip, is probably the best known world-wide. An Israeli invention, salat hatzilim is a smoky, creamy combination of charred eggplant, garlic and mayonnaise that is downright addictive. Eggplant caviar (a dip of grilled, pureed eggplant) is another favorite, but with dubious origins – everyone from the Israelis to the Italians, and the Ukrainians to the French, claim it as their own.

Despite the prevalence of eggplant, a mezze assortment cannot be composed of eggplant alone (although some may argue with this). Tomatoes are another common flavor. Turkish salad, which is more sauce than salad, is made with pureed tomato, onion, red pepper and tomato paste and then is chilled. Matboucha is a Moroccan alternative that uses similar ingredients, but calls for them to be simmered together.

Another Moroccan mezze staple is carrot salad, which mixes sliced, cooked carrots with lemon, cumin and other (often hot) spices for a piquant starter. Pickled vegetables often accompany the mix of dips, but rarely are they cucumbers. Pickled carrots, beets, cauliflower, and more add a slightly sour crunch to the mezze selection. Hummus and tahina dip also make regular appearances in the rotation, as do green olives. Vegetables stuffed with rice or meat are less common, but do occasionally make an appearance, particularly when the mezze is being eaten as a meal.

Mezze is a great addition to any home cook’s repertoire. They rely on simple, quality ingredients that are full of flavor and are best prepared ahead of time. As Janna Gur advises in “The Book of New Israeli Food,” “Laying a truly magnificent meze [sic] table is not so difficult since nearly all the dishes are made ahead and you can always complement the selection with a few purchases: olives, a slab of feta cheese, pickled cucumbers and stuffed vine leaves.” Most mezze not only require that you allow them to sit either at room temperature or in the refrigerator for at least an hour or overnight, they improve when they are made in advance, giving the flavors extra time to meld. Whether entertaining on a weeknight or hosting Shabbat dinner, recipes like these can be lifesavers and are sure to impress your guests.

1) Cook the carrots in boiling water until just tender, about 10 minutes.

2) Drain the carrots and rinse under cold water. Slice on a bias into thin coin-shaped slices.

3) Mix together the garlic, chili powder, lemon juice, cumin, paprika, parsley, and harissa (if using) and toss with the sliced carrots. Season with salt.

2) Remove the eggplant from the flame or broiler and allow to cool. Scoop out the pulp and blend in a food processor.

3) Pulse or stir in the tehina, lemon juice, garlic and cilantro or parsley. Season with a dash of chili powder and salt. Serve warm or at room temperature. You can refrigerate overnight and bring to room temperature before serving.

1) Whisk together the tahina, lemon juice, and garlic (you can also do this in a food processor, but a whisk is preferable).

2) You will probably find that at this stage the tehina will become quite thick and dry. Stir in cold water a few drops at a time until the tahina dip is the consistency you want. Typically it is thin enough to drizzle but thick enough to dip.

3) Pulse or stir in cilantro or parsley, if using. Season with salt to taste. Serve at room temperature.