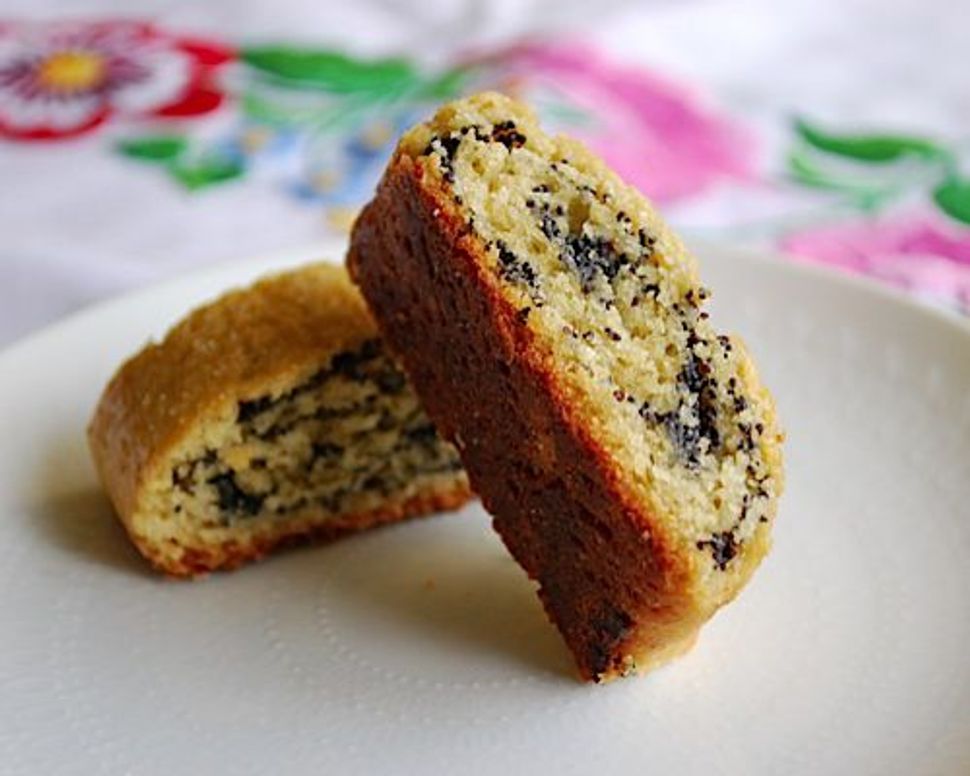 Imagine removing the sweet and sticky poppy seed filling from a hamentaschen. Now, roll this into soft and light yeast dough to form a log. After baking, cut into slices, and admire the black swirl against the light pastry, a kind of Ashkanazi yin-yang delicacy. It used to be a classic Purim treat, both in my family and in Poland and Israel.

My family tradition of delicious and sweet poppy seed rolls stems from my late grandmother Rachel. Born in Poland, she made aliyah to Israel in her youth. Throughout her life, she prepared traditional Ashkenazi dishes. Her yeasted poppy seed rolls were Purim favorites, and also frequently made an appearance during the rest of the year. Even into my father’s adulthood, my grandmother baked huge batches of these pastries for Purim and packed them up to give to my father and his siblings. With Purim approaching, I decided to recreate the recipe that I had heard so much about.

As with many other Jewish holidays, the tradition of poppy seeds for Purim is rooted in symbolism. Apparently, we Jews blot out the name of the evil Haman by gobbling up poppy seed desserts. According to the “Encyclopedia of Jewish Food” by Gil Marks, the Yiddish word for poppy seed, mohn, is similar to the Hebrew pronunciation of the villain of the Purim story, Hamohn. Thus, the Ashkenazic Jews of Eastern Europe celebrated Purim with the poppy seed hamentaschen that are well known today, as well as poppy seed cookies and filled yeast pastries like my grandmother Rachel’s poppy seed roll.

For holidays and desserts year-round, filled yeast pastries have really caught on in Israel, but less so in America. In both countries babka is a beloved pastry made from sweet yeast dough that is allowed to rise before baking, and is typically filled with chocolate or cinnamon. But otherwise, yeast dough in America is mainly associated with savory goods, like pizza or bread. In Israel, however, yeast pastries comprise a proper baking category in their own right. Known as ugat shmarim, or yeast cake, they are commonly filled with poppy seed or chocolate. Even for Hanukah, jelly doughnuts or sufganiot, made from yeast dough, seem to be more popular in Israel than they are here, where latkes dominate as the holiday food.

Longing for a taste of Israel, and desiring to connect with my roots, I set off to make my grandmother’s recipe for poppy seed rolls, given to my by my aunt. I wanted to honor my grandmother’s recipe as much as possible, but found it necessary to make some changes to better suit contemporary American sensibilities. For example, the recipe contained margarine, which was probably a relic from the days when margarine was thought to be healthy. The recipe is already dairy, so a pareve fat is completely unnecessary. I also replaced the fresh yeast with active dry yeast, since the dry kind is easier to find in stores. For fun, and for a little nutritional boost, I couldn’t help but sneak in some whole wheat pastry flour from my CSA’s flour share.

I made sure to leave in some of my grandmother’s details. Her instructions — to let the dough rise covered by a towel and a pillow — seemed particularly quaint and cozy. Though it’s common to cover rising dough with a kitchen towel, the idea of piling on a pillow created an image of my recipe being tucked in for slumber. And, appropriately, the risen yeast dough had a soft fluffiness to it when I rolled it out, reminding me of the bedding that had covered it.

The finished pastries are cut into crumbly, delicious cookies. They bring to mind a lighter, more sophisticated jelly roll, as well as hamentaschen themselves. For me, they provide a taste of Poland and Israel, family and Megillah. While they might not be as traditional in the Purim gift basket, they will make a fine dessert for your holiday meal. Enjoy!

2 tablespoons sugar, for sprinkling over the top

1) In a cup or small bowl, combine warm water, sugar, and yeast. Allow to sit and bubble for 15 minutes.

3) Meanwhile, make the filling. In a small saucepan, combine poppy seeds, cream, and sugar. Simmer for about 20 minutes, stirring often, until the poppy seeds have absorbed most of the cream. Remove from heat and let cool for a couple of minutes. Whisk in vanilla extract and only half of the beaten egg. Reserve the remaining egg for the egg wash. Leave poppy seed filling at room temperature until it is needed. (If the poppy seed filling seems too runny once it’s needed, add very fine graham cracker crumbs to thicken it.)

4) Set aside a ½ sheet pan covered in parchment or a silicone baking sheet. Divide dough into 3 parts. Roll out each piece of dough between two sheets of wax paper or parchment paper, flouring as need to prevent sticking. Roll to a thickness of about 3/8 inch, making a rectangle about 9 inches in length. Spread one third of poppy seed mixture over the surface of each dough, keeping an inch of empty dough on one long side. Starting from the opposite long side, roll the dough, narrowly folding in the sides halfway through. Gently pinch the end to the roll. Repeat for each roll, and place the rolls seam side down on the baking sheet. Allow rolls to rise for at least 30 minutes more. Preheat oven to 350.

5) Brush remaining beaten egg over rolls, and sprinkle with sugar. Bake for about 25 minutes, until the rolls are golden. Carefully transfer the rolls to a wire rack, using two spatulas if necessary to prevent breakage. Once cool, cut into 1 inch cookies.

Hilla Abel is a natural foods chef and cooking instructor. She is the owner of Health in a Pan.