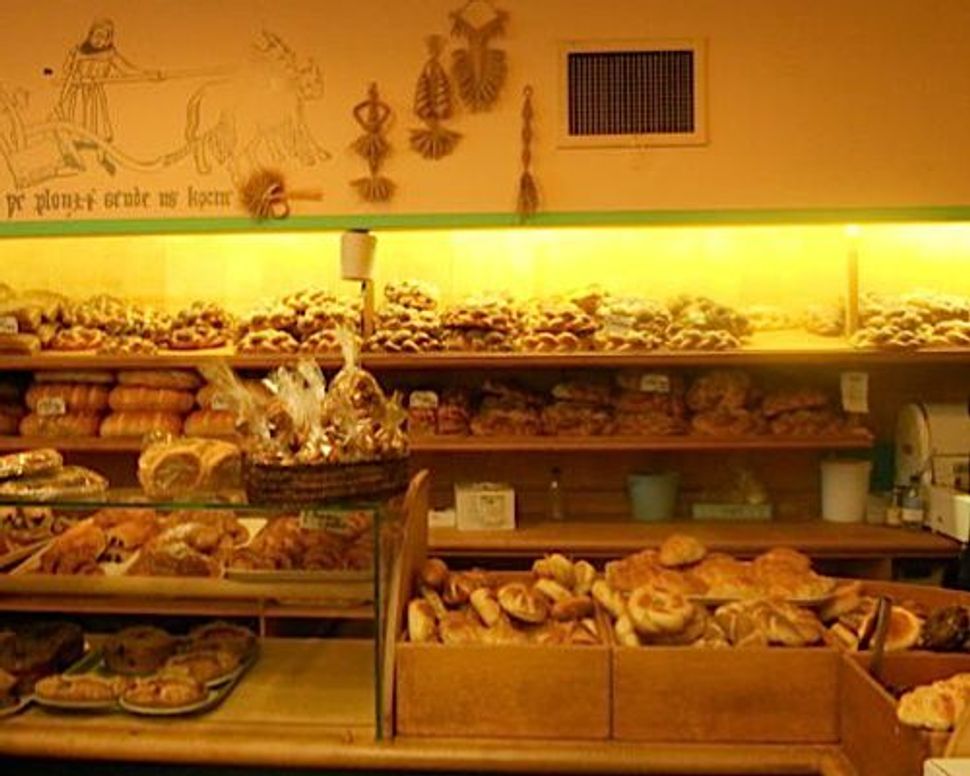 When a stooped, ball cap-wearing elderly man buying challah, salad and stewed chicken fricassee at Toronto’s Harbord Bakery says, “they’ve been keeping me alive for years here,” he is by no means exaggerating. Indeed, the Kosower family, owners of this legendary establishment since 1945, have been provisioning loyal locals with exceptional quality breads, baked goods and Jewish appetizing items for generations.

Today, as the only remaining Jewish retail bakery in downtown Toronto, Harbord Bakery is still in its original location on Harbord Street and is still using its original family recipes. They are attracting the young Jewish singles and families who are moving back into the neighborhood, now referred to as The Annex and considered a prime, trendy residential area. It’s the kind of crowd that appreciates the fresh, artisanal and gourmet food offered not only by Harbord Bakery, but also far more recently opened neighborhood Jewish food businesses like the Israeli Aroma espresso bar and Caplansky’s Delicatessen.

On a Friday afternoon, customers like Faggie Oliver, who has always lived in the neighborhood and who has been coming to the bakery for 45 years, mingle with newcomers like 32-year-old Marni Perlis who maneuvers her two little boys through the aisles in their stroller while picking up a challah for Shabbat.

Indeed, it is the bakery’s challah for which it is best known, and for which patrons come from all over the city to buy. Many swear that there is no better challah available in Toronto than Harbord’s sweet, dense, exceedingly moist and chewy version of the braided egg bread. Harold Troper, a professor of education and expert on Toronto Jewish history, looks forward to every Friday afternoon when he walks over to the bakery from his nearby University of Toronto office to pick up his standing order of the $4.00 each non-kosher (the bakery does not have kosher certification) loaves.

Harbord Bakery’s reputation, however, does not rest entirely on its challah. “Their breads, especially their rye bread, are outstanding,” said Hindy Hirt who grew up a few streets away and still comes down to Harbord Bakery from time to time. “This is good food,” exclaimed Oliver as she stood at the display cases surveying the variety of savory items like chopped liver, farfel and gefilte fish, as well as sweet ones like carrot cake, cheese danishes, sour cream coffee cake and fancy fruit tortes.

Originally opened in 1926 by a baker with the last name of Elishevitz, but whom everyone called “Mr. Ellis,” as Hirt recalled, Harbord Bakery was bought in 1945 by Albert (Alter) Kosower, a Polish immigrant who “was from an Orthodox home, but rebelled and learned the baking trade from local bakers in Kosow,” according to his daughter Susan Wisniewski. At the time, the bakery was located in the heart of what was then Toronto’s Jewish neighborhood. “I remember as a girl in the 1940’s that we used to buy this most amazing black bread from Harbord Bakery,” recalled Hirt. “The loaf was so big that we would cut it up and give half to my grandmother and keep the other for our family.”

A big seller today, that the bakery has served for a long time, is the apple geviklts, or cookie dough roll up (recipe below). According to Wisniewski, Albert Kosower was originally skeptical about this recipe, thinking that it was “too homemade” for a retail bakery. Nevertheless, his geviklts were a hit, and he taught his daughter Roslyn Katz (Wisniewski’s sister) to make them. She, in turn passed the recipe on to her brother Rafi Kosower’s son Naftali, who comes in to the bakery every Friday to make it for the Shabbat shopping crowd.

Wisniewski admits that running a bakery can be challenging, and there have been ups and downs over the years. She attributes the longevity of her family’s business to the “very loyal neighborhood.” She is heartened to see children and grandchildren of original customers regularly coming in the door today. “They’re a really nice group of people,” she said.

Her brother Rafi Kosower, who took over from his father, pegs the Harbord Bakery’s success to the fact that it has been an artisanal bakery before “artisanal” became a buzzword. Everything is baked on the premises and “everything here is done in a real artisanal way. He continued, “We’ve been doing this since day one and our recipes haven’t changed. We’ve always used high quality ingredients like real butter and whipped cream.” And “of course, there’s the magic bacteria in the air at the bakery that makes the starters for the bread ferment in just the right way,” he said with a wink.

The recipe yields one large geviklt or two smaller ones

1) Sift all dry ingredients into a large bowl.

2) Form a well in the center of the bowl.

3) Mix the wet ingredients together in a separate bowl.

4) When combined well, pour into the well and mix until combined.

4 grated apples
1/2 cup raisins
1 tablespoon jam
orange zest
1/4 cup sugar
1 teaspoon cinnamon
old honey cake (The honey cake can be any kind, it should not be fresh, it is used to absorb the juice from the apples. This will help the dough from being soggy. Bread crumbs can be used as a substitute. You should use enough to cover the bottom of the geviklts.)

1) Roll out dough until thin.

5) Bake on greased cookie sheet at 350 degrees or until brown.