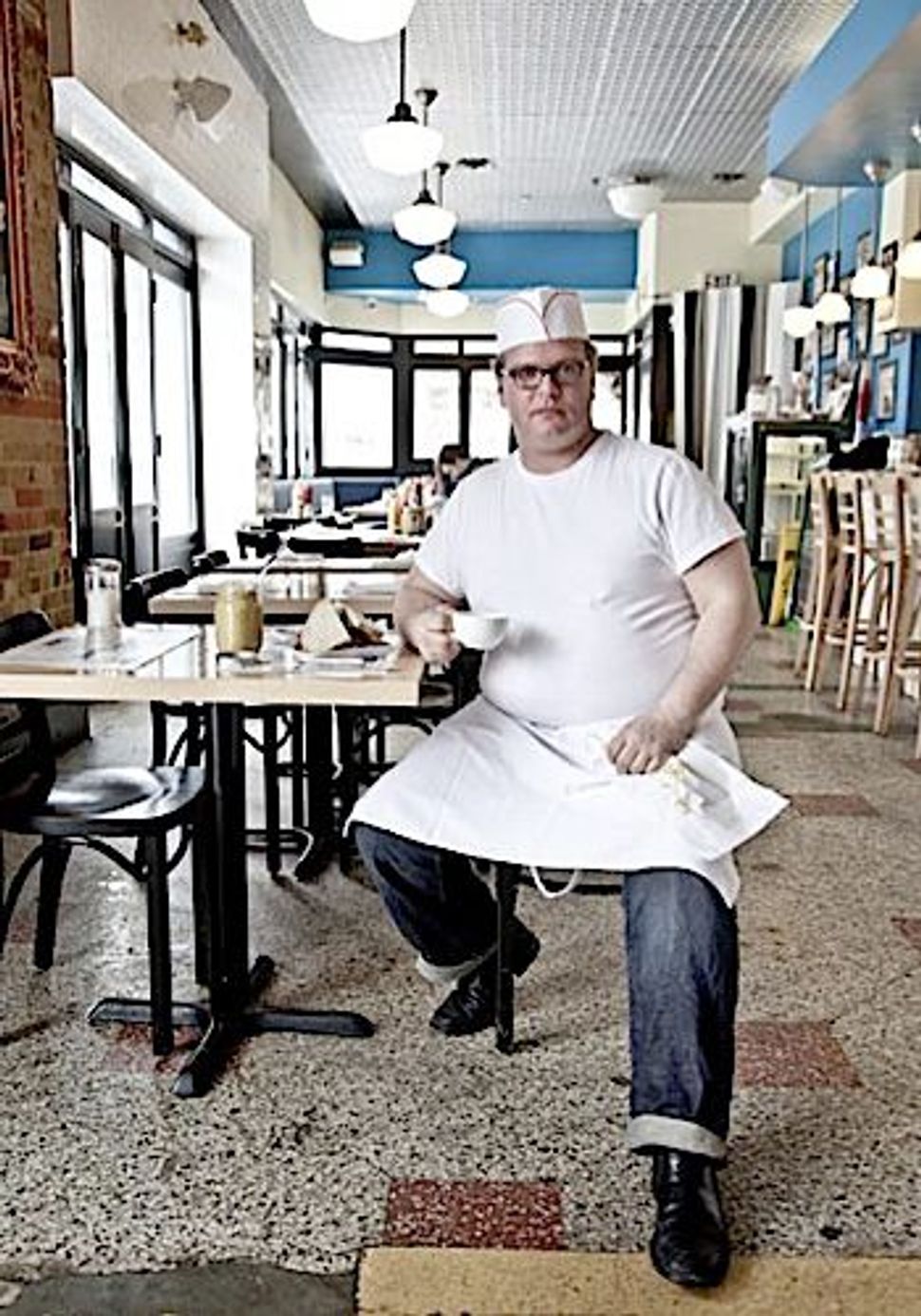 When Torontonian Zane Caplansky was 16 years old, his then-girlfriend, who was from Montreal, introduced him to the smoked meat of the famed Schwartz’s Delicatessen. Caplansky broke up with that girlfriend many years ago, but his devotion to good deli has been abiding. “My love affair with smoked meat has been long lasting,” he declared.

Now 42, Caplansky, who opened his eponymous Caplansky’s Delicatessen in downtown Toronto a year and a half ago, has wedded his name and reputation to his own version of cured and smoked beef brisket. Not to be confused with corned beef (the pickled and boiled brisket for which Toronto is traditionally known), Montreal smoked meat is more like pastrami — the main difference being that the former is made from brisket and the latter from the tougher navel cut.

Located on a busy corner in Kensington Market, once home to the city’s Jewish immigrants in the early part of the last century, there is no mistaking you are in an authentic delicatessen at Caplansky’s. If the original terrazzo floor, white tiled counters and simple wood tables and chairs don’t tip you off, then the strong smell of meat being smoked that hits you as you enter will. Caplansky’s is the only delicatessen in Toronto that makes its own smoked meat (Montreal-style or otherwise), and it is delicious. You almost don’t have to chew it, as the lean, tender slices almost melt in your mouth in a taste explosion in which the salty and smoky notes can be separately discerned.

Aiming to preserve and respect old-fashioned recipes while at the same time appealing to the tastes of newer generations, Caplansky’s is all about hip Jewish comfort food. The slogan on the wait staff’s t-shirts says it all: “Caplansky’s: A kickin’ it old shul delicatessen.”

What’s old is new again, according to Caplansky. Everything on the menu rings true to Jewish deli tradition and is made from scratch in house. There is cabbage borscht, chicken soup with matzo balls, chopped liver, kishka, knishes, tongue and gefilte fish. He caters to young people, who are concerned not only about old-time taste, but also local food sourcing, (relatively) healthy-eating and conservation values.

Caplansky refers to his food as “restorative, nostalgic and comforting.” He welcomes and embraces his customers of all ages and ethnic backgrounds as they come in. “I like to nourish people through food. This is what floats my boat, what turns my crank,” the rotund, fashionable black wayfarer glasses-wearing restaurateur reflected.

And as a personal challenge, Caplansky decided that everything on the menu “has to be unique to me,” he says. He invented the special spice rub for his smoked meat (which he dry cures, rubs, smokes, steams and hand slices on the premises) and has it mixed for him in Toronto’s Little India, where the bags containing the rub are labeled “special masala” — a mixture of black pepper, garlic, onion, coriander seed, mustard seed, celery seed, chili flakes, cumin, brown sugar and one secret ingredient.

Even if you don’t order Caplansky’s smoked meat sandwich, you are likely to get a sampling of the delicious meat. The deli’s hamburgers are 70% ground beef and 30% smoked meat. He uses smoked meat scraps in his pea soup, and in his gravy. He cooks his cabbage borscht using smoked meat, instead of flanken. Caplansky also renders his own schmaltz, smokes the tongue he serves, and breaking from tradition, makes knishes by stuffing puffed pastry.

With a brand that says, “homemade, comfort and old-fashioned,” Caplansky is also careful to deal only with vendors who share his ethics. For example, his rye bread is from Silverstein’s, a family-owned Jewish bakery in downtown Toronto dating to 1918, and he serves beer from local microbreweries and soda pop made by an independent, family-run company.

Caplansky’s is neither kosher nor kosher style. Cheeseburgers and local delicacy poutine (fries covered with gravy and cheese curds) topped with smoked meat are on the menu. “Our poutine was recently rated as third best in the city,” the owner proudly shared. At the same time, Caplansky refuses to acquiesce to patrons’ requests for cheese on their smoked meat sandwiches. “Delis are cultural institutions,” he asserted. As such, there are certain taboos he will not break.

Undoubtedly, running a deli is a business, but for Caplansky it is about more than that. It’s about connecting with others through food and being part of customers’ lives. “It means a lot to me when tense, very sad looking people come in here for a bowl of my matzo ball soup and leave feeling better.”