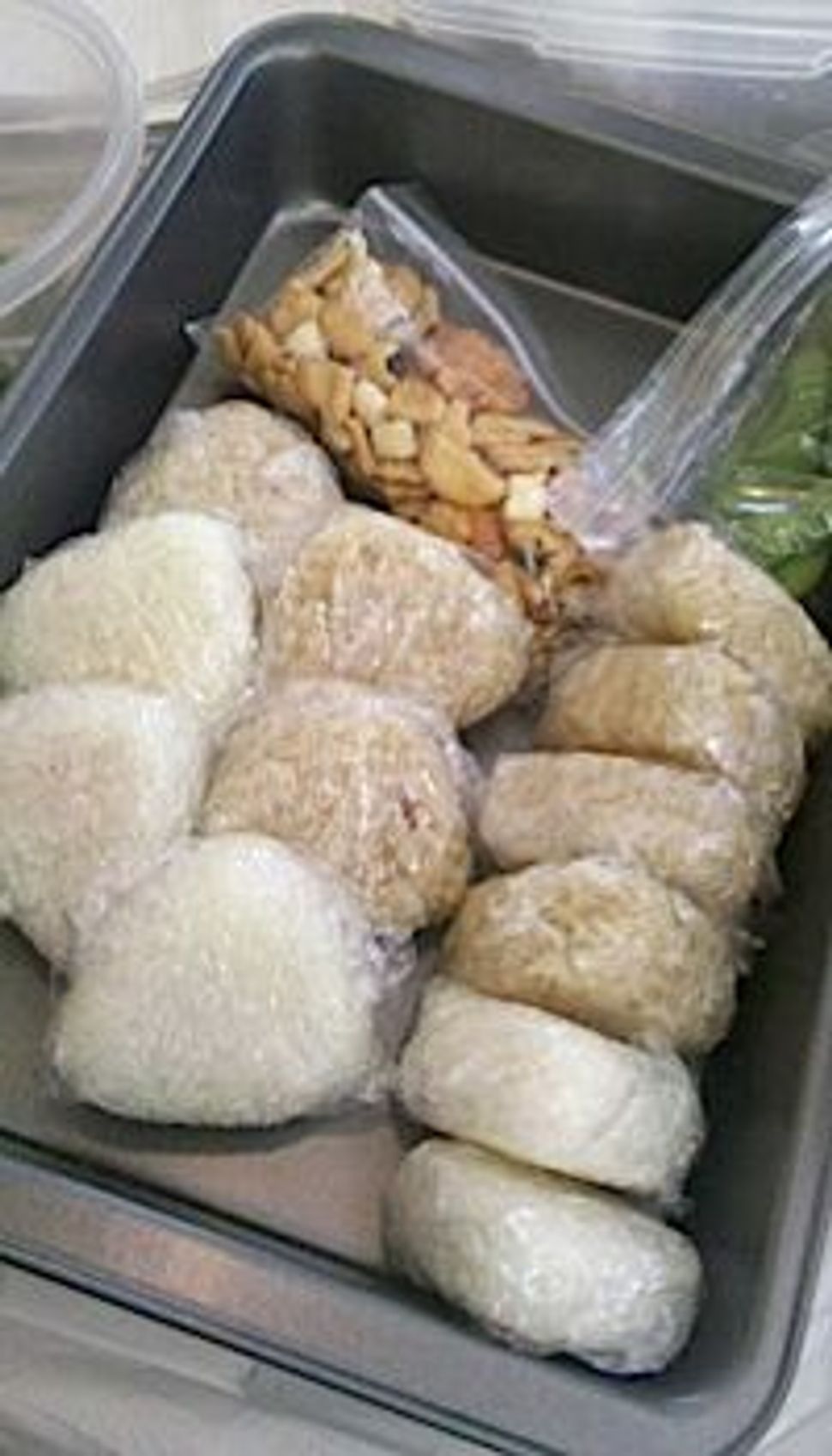 Homemade inari sushi, mandle bread, rice balls, spicy edamame, hamantaschen, and rice crispy treats. If there was anything incongruous about the offerings at the recent bake sales for Japan earthquake relief at Brandeis Hillel Day School, a pluralistic Jewish day school in San Francisco, no one seemed to notice. The mix of Jewish, Japanese and American treats spoke directly to the palates of this unique modern Jewish community.

Though bake sales are “not a tradition” in her native Japan, parent Yumi Murase Berman, has learned about them since immigrating to the United States. Reacting to the recent tragedies in Japan, she reached out to other Japanese-American-Jewish families to host two fundraising bake sales. The menu they created for the bake sale was an extension of the multi-faceted identities that exist for many of these multi-ethnic families and the foods they eat.

American Jews have had a long romance with Chinese food. But the food of this school (which serves both falafel and sushi in its lunch program) and community represents more than culinary tourism or attempts of trying the cuisine of the moment. This mixing of cuisines could be credited to the American tradition of adopting and blending foods of immigrants into a culinary melting pot. But it is equally a natural extension of the Jewish culinary tradition of adapting and integrating local foodstuffs and recipes into the Jewish diet. These blending cuisines and food traditions are part of the ongoing negotiation of Jewish identity and community that we see mediated through food. In this case, it comes not from outside influences but from within the growing Jewish community’s internal Jewish culinary negotiations.

From where we sit today it would seem absurd to challenge the authenticity of “Jewish” foods, such as bagels or gefilte fish. Yet writing in 1949, in the introduction of the classic, “Jewish Cookery”, Leah Leonard noted with some horror that the first American-Jewish cookbook included “not one [recipe] for gefilte fish!” Because in 1871 when Esther Levy collected those first recipes in “Jewish Cookery Book”, gefilte fish and for that matter bagels would have been more foreign at a Jewish function in the United States than sushi would be today.

Our collective understanding of what constitutes Jewish food has always shifted with our experience of community and culture. The origins of gefilte fish’s popularity among American Jews are lost to us but watching the ways in which the Jewish second graders at the Brandeis bake sale unanimously approved of Japanese food, one gets a sense of how the new becomes familiar.

There is no questioning the Japanese origins of foods such as sushi, nori, edamame and onigir. But as the Jewish world and community in San Francisco continues to shift and expand, incorporating Japanese-Americans and their food traditions, it is easy to see how Japanese foods can become part of the authentic Jewish culinary legacy too.

Note, Berman says, “Traditionally we put grilled salmon or pickled plum in the center, but you can always make plain onigiri with a bit of salt. The kids love it.” The key is to wrap them in a plastic (saran) wrap or a zip loc bag (they get dry and hard easily!).

1) Rinse rice with water in a bowl. Drain water.

2) Pour rice and water in a cooking pot.

3) Cover the pot and boil the rice for about 5 minutes or till water comes to boil on high heat.

4) Reduce heat to low and simmer rice for 10-15 minutes until water is almost gone.

5) Best to wait 5 minutes or so to let rice sit in pot. Mix with a rice (bamboo or plastic) spoon or ladle.

6) Use a mold, or shape by your hands — put a piece of saran wrap on your palm and shape rice as desired — triangle, ball, square, heart….be creative, but careful, rice is really hot! Poke a hole and put a piece of salmon, then cover with rice.

Cleanup tip: Soak everything in water (dish, pan, spoon, ladle, mold…) for an hour or so before washing. For rice on floor…just leave it till it gets dry and hard…then vacuum. Don’t vacuum while it’s sticky!