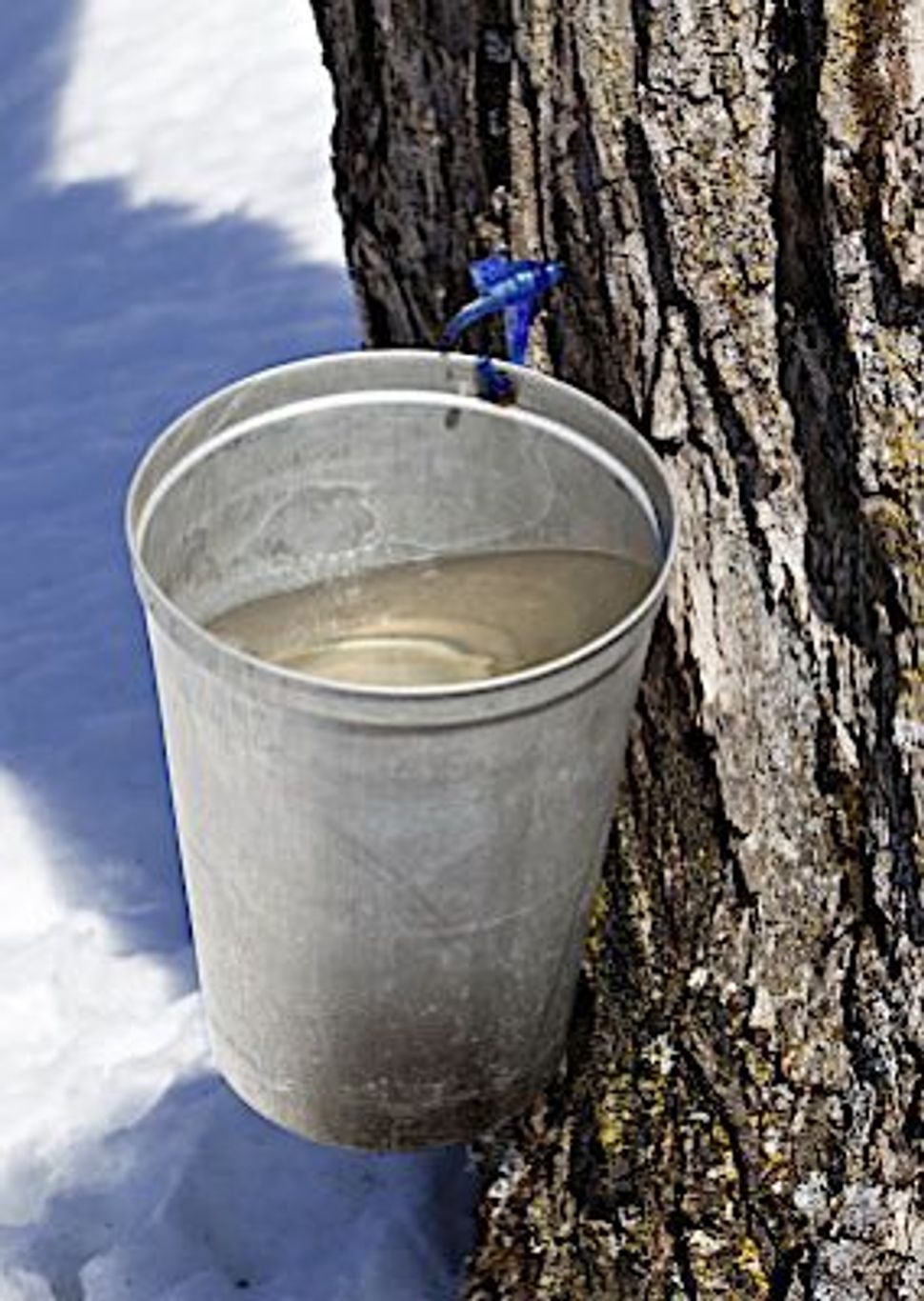 Preparations for the maple harvest on our farm in southwest New Hampshire, started a month ago, around Tu B’Shvat. Although we were celebrating the birth of our natural world with four feet of snow underfoot, one could still sense that below the snow things were awakening. We started tapping maple trees around the end of Shevat until the beginning of Adar, near the beginning of March. Tapping the trees involves snowshoeing into the woods, pulling a sled full of buckets, lids, spiles (an iron spigot that is driven into the tree), hammers and drills. When we approach our first sugar maple tree, we take a moment to give thanks for arriving at this moment in time. We take turns drilling the hole into the tree, hammering the spile into a hole and hanging a bucket off the spile. We pay close attention to where previous years’ taps were set, being careful not to tap too close and injure the tree. This year our family put out about fifty taps, contributing to the 600 total in our community. We are always amazed by the beauty of the trees and the miracle of maple sugar.

Now we’re in the middle of the “hurry up and wait” game. For the next few weeks we wait for the weather to cooperate. In order for the sap to run, the nighttime temperature must drop below freezing while the daytime temp needs to be between 42-50 degrees. The direction of the wind, the amount of sunlight and forces of the moon also play a part in how well the sugar runs. After checking buckets with eager anticipation on multiple occasions, the first run of the season is cause for great celebration. On that day at suppertime we add an extra bracha, or blessing, for the sap of the tree and drink it out of wine glasses! Not quite as sweet as grape juice, sap has a silky cold and refreshing flavor that awakens us to spring.

By the 15th of Adar, which happens to coincide with the first day of spring this year, a month after Tu B’Shvat, it is Purim, and sugaring is in full swing. Last week our next door neighbor’s son had a birthday party. One of the highlights of the party was gathering sap into the tank and sledding the tank down the hill. There is nothing better than twelve six-year-olds pitching in to do some of the heavy pulling! After gathering the day’s run, the sap is transferred to holding tanks at the sugar house. When there is enough sap in the tanks we will get the fire stoked and start boiling off the water to get syrup. We get the fire roaring so steam is rapidly released from the boiling sap. For every 40 gallons of maple sap we boil, we get one gallon of maple syrup. Therefore a lot of time is spent in the sugar house – telling jokes, playing Yahtzee, drinking maple tea, taking deep breaths of maple steam and stoking the fire. In keeping with the spirit of the season, we drink a lot of sap tea and share much joy, some nights boiling well past midnight.

Maple sugaring season in New England is a special time for many of us. This story, in various iterations is retold by many families. Many New Englanders derive both meaning and part of their livelihood from maple sugaring. While there is a strong trend towards the industrialization of this process, there are still numerous local sugarhouses that sell their syrup from the farm and in local stores. The syrup is graded by color, from amber-grade A, through grade B light, medium and dark. The grade corresponds to the amount of mineral content in the syrup whereby the lightest colored syrup has the least mineral content. Interestingly, as we draw off syrup from the boil, the syrup gets progressively darker as the season goes by. The lightest syrup is made from the first runs of sap, the darkest is at the end of the season. The lighter syrup has a more subtle and refined flavor than the bold and complex quality of the darker grades. In our family we use the lighter grade on pancakes and cook with the darker grades.

Within the next two to three weeks, sugar season will come to a close. By the 15th of Nissan, the 18th of April, we will have removed the taps from the trees, shut down the sugar house and put away 8-16 gallons of syrup. We will have left the narrow light of the winter months and be celebrating Passover with our community.

Craig Oshkello lives with his wife Stacey and children Ayla and Adyn on a community land trust in Acworth NH. They are currently in the process of creating a Jewish Ecovillage in rural New England. Visit here to learn about where they live and facebook jcom ecovillage to learn about the new community they are forming.