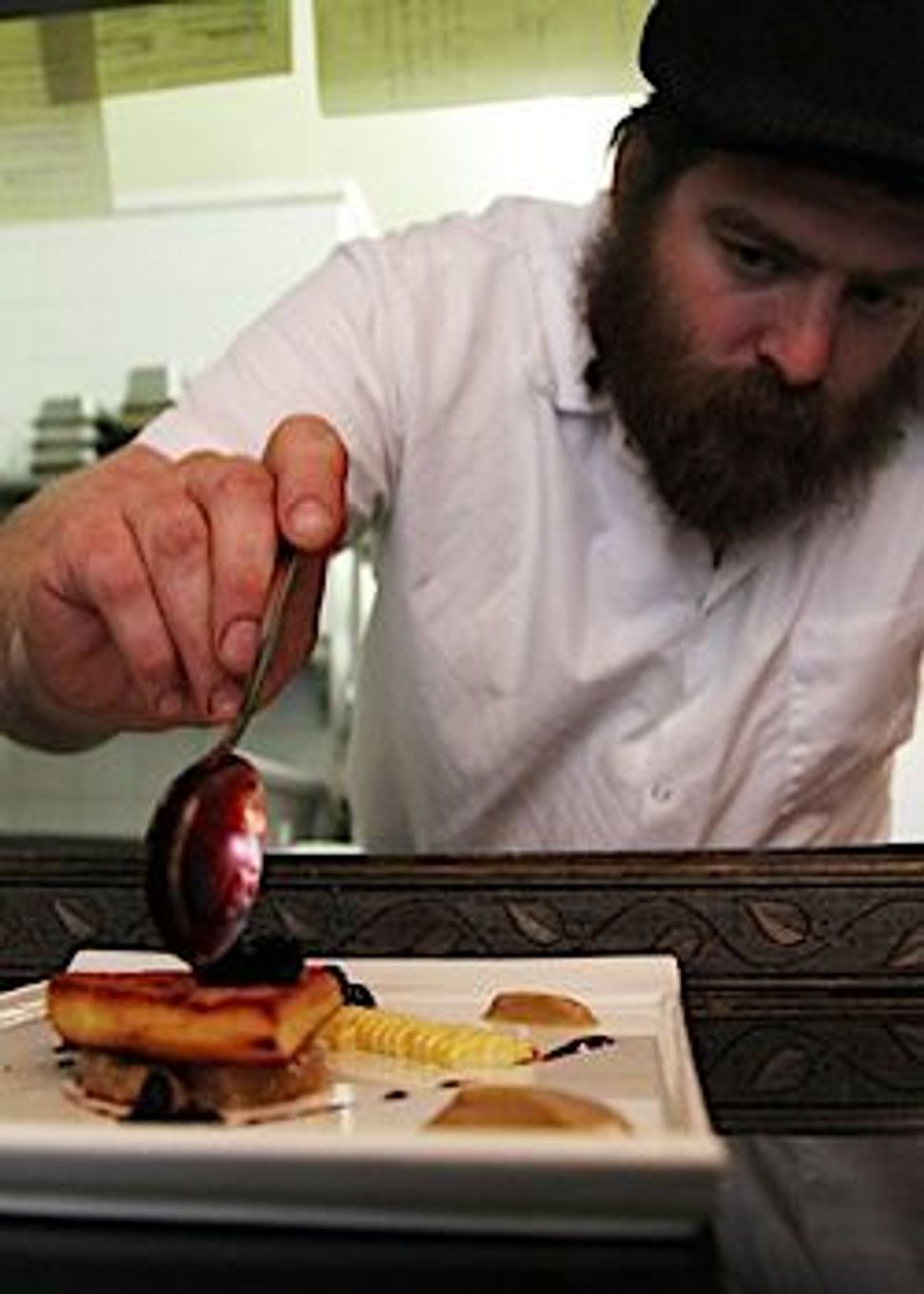 In our new series, Chosen Chefs, we will profile up-and-coming Jewish chefs making waves from L.A. to New York. And in case you can’t get there, we’ll include a recipe from each of the chefs that you can make at home.

These are members of the tribe who you’ll want to keep on your radar. If we were the betting type, we might see some James Beard Awards in their future. First up: Chef Moshe Wendel of Brooklyn’s Pardes.

Kosher restaurants are not usually known for taking culinary risks. In response to guests’ demands, kosher chefs tend to play it safe. But Moshe Wendel, chef and owner of Pardes restaurant, in Brooklyn’s hip Boerum Hill neighborhood, is no ordinary kosher chef. And he doesn’t run your typical kosher restaurant.

Wendel — who became religious through Chabad five years ago — admits that his original plan for Pardes was to cook more traditional meat dishes like steaks and burgers. But his wife and partner in the restaurant, Shana — who like her husband, once worked in the non-kosher restaurant world and became religious later in life — steered him against it.

She knew that he had perfected all kinds of food in the “regular world,” and wanted him to show what he had learned. “She tried my food and said it wasn’t as good as the stuff I was making when I cooked treyf,” said Wendel.

“When you become religious you lower your expectations for what you’re going to do in the kitchen. That’s not necessarily a bad thing. Being a chef is a very rough job, and I wanted something low stress. But my wife thought I was selling myself short. Now I cook what I really want to be cooking,” he said. Though he can’t use the cheese or butter he used use in his meat dishes, Wendel thinks the food he’s making now is better. “I think I’m more in tune with food now than ever before.”

Wendel, 32, attended a culinary apprenticeship program in Pennsylvania and then cooked around the South of France before moving on to mostly French restaurants in the Philadelphia area. He eventually ran the kitchen at the ever-popular Django restaurant in Philadelphia.

When he became religious, his attention turned toward kosher food. In March 2010, he helped open Basil Pizza & Wine Bar in Crown Heights, which is known for blending gourmet and religious sensibilities in a neighborhood where kosher restaurants are anything but inventive.

In October, Wendel broke away to open Pardes. “It’s just like any Brooklyn bistro, it just happens to be kosher,” Wendel said.

Wendel described the neighborhood — about ten minutes from where his wife grew up — as “Jewish no-man’s land.” But he thinks that that’s part of the restaurant’s appeal. “It’s so off-the-beaten path that people feel they can relax. Jewish neighborhoods can be overwhelming,” he said.

“People are not going to travel from [the traditionally religious neighborhoods of] Flatbush or Crown Heights to Boerum Hill, and wait days for reservations to have a well done burger,” he said.

Wendel alters his menu almost every day depending on what’s fresh, and serves diners dishes rarely seen in the kosher world, such as a salt cod “crab cake,” and duck-stuffed aroncini (Italian fried saffron rice balls). He recently put a candied eggplant on his tasting menu.

The restaurant uses free-range chickens (“more humane and tastier,” he said) and much of his produce is organic (“it’s higher quality and more interesting”).

Despite his forward-thinking approach to food, Wendel’s not taking any shortcuts when it comes to kashrut. His restaurant is under the supervision of the Orthodox Union. He plays mostly Jewish music, though he’ll play secular music if someone in the band is Jewish. The restaurant is outfitted with tzedakah boxes and siddurs. A photo of the rebbe was the first thing he put in the restaurant, he said.

The restaurant’s name, Pardes, means orchard in Hebrew, but it also has a Kabalistic meaning — Pardes is an acronym for the four levels of learning torah (Peshat, Remez, Derash and Sod). “Chabad Chasidus is meant to be the ultimate level, combining all four of them,” Wendel said.

“I am a Chasidic Jew. This is my Chabad house. In my Chabad house, we show that kosher food can be great. It doesn’t have to be what you think it is.”

This non-traditional way of presenting traditional food seems to be paying off, with rave reviews and filled seat. If you don’t have a reservation at the 34-seat restaurant, you probably won’t get in.

When asked whether he plans to expand to another location, Wendel said he’s first focusing on perfecting Pardes.

” I think the end goal might be to open another location. I want the seats to be full in Pardes for a year, and then everything else will come after that. Nothing’s more laughable than inexperienced restaurateurs who open new places too soon.”

And, while the first few months have been good for Wendel, getting to where he is now wasn’t easy. The Wendels ran out of money and leveraged their house against the restaurant. When it came to opening day, they had no money to buy food and wine. “Thank god, our mothers pitched in the final money. If we had not been packed since the minute we opened up, we would have been closed,” he said.

“Crown Heights came out for us, Flatbush came next. I think God paid us back in spades.”

2) Place cobs in pot with just water to cover.

5) To serve, reheat puree with an immersion blender till frothy, garnish with roasted corn kernels and julliened basil.