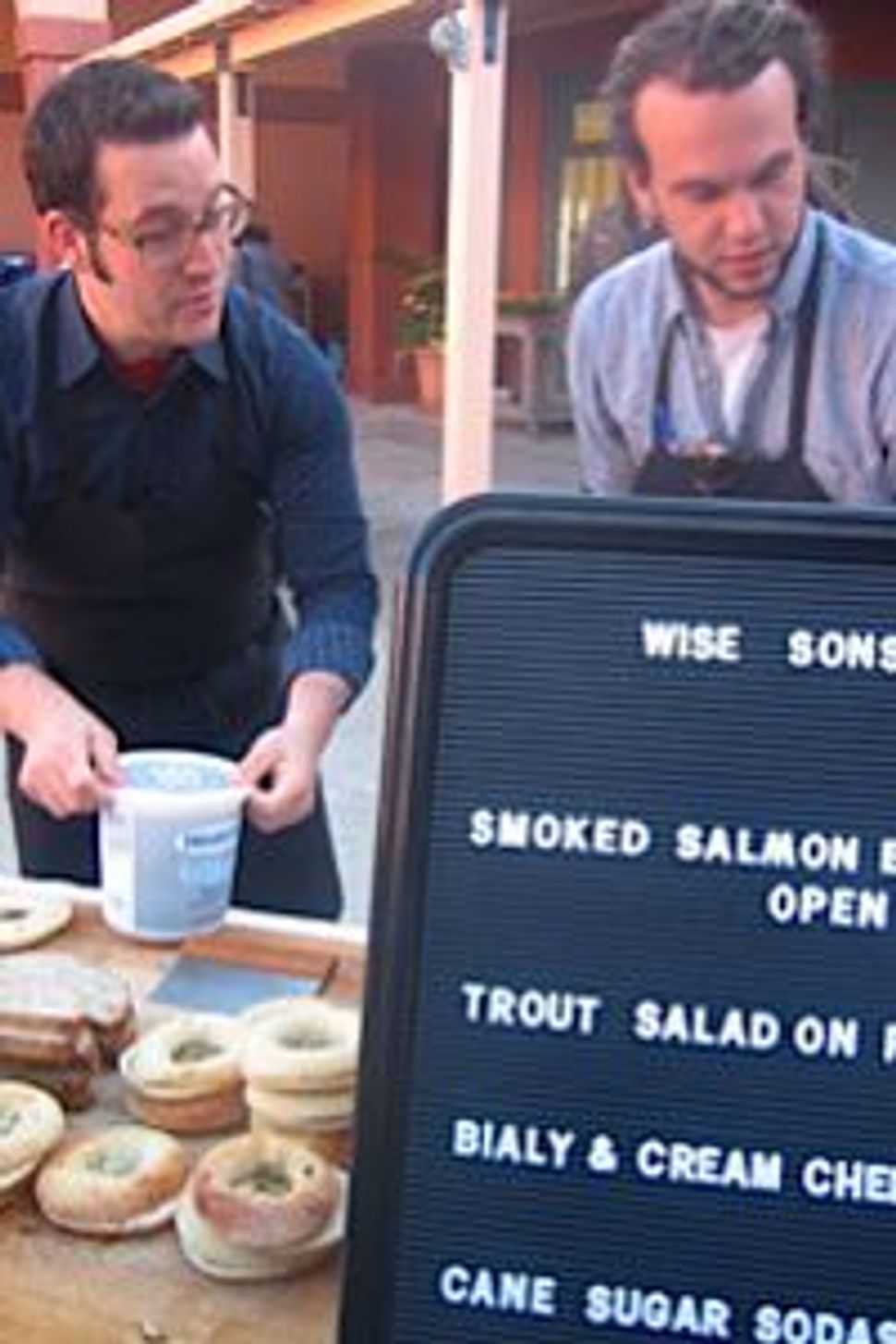 People don’t talk about “delis” anymore. They talk about “Deli,” the culinary genre under threat of extinction — one that a few chefs are fighting to bring back.

At least that was what they were talking about this past Thursday, at the Deli Summit in Berkeley, Calif. The summit was convened (so to speak) by Karen Adelman and Peter Levitt, owners of Saul’s, in Berkeley. They invited owners of three other cutting-edge delis — Noah Bernamoff of Mile End in Brooklyn, Ken Gordon of Kenny & Zuke’s in Portland and Evan Bloom of Wise Sons popped-up in San Francisco — to talk about the pleasures and challenges of running a deli on a panel moderated by Jewish cookbook maven Joan Nathan.

Their mission, as explained by Adelman, was to celebrate the Deli and confer on survival strategies of the new Deli. The Summit was billed as a rare conversation among Deli revivalists. It was also an attempt on the part of these newcomers to glean some credibility in the eyes of their doubters.

And there are many doubters. Each panelist recounted a steady stream of unsolicited criticism from both patrons and skeptics alike, the endless comparisons to the meals of countless grandmothers, aunts, and neighborhood delis from so many mythic Jewish childhoods. Gordon, recalled a day when he was stopped by two separate people within ten minutes, one telling him there were too many caraway seeds in his rye bread, the other saying there weren’t enough. Wearing a t-shirt that read “Body by Pastrami,” he obviously has a sense of humor about his chosen profession. Kvetchers come with the territory.

The crisis of legitimacy was mostly a conversational prop, though. It quickly became apparent that the question of what is “true deli” is superfluous to a business’s success. Rather, these new delis succeed not by imitating old recipes but by the care, precision, and focus they put into their own versions of smoked meat, fresh bread, and other delicacies like pickles, chopped liver and celery soda.

As Levitt explained, the Jewish deli revival is a subset of a larger movement towards artisanal foods that values quality, ethical meat, organic produce and locally sourced ingredients. This model comes with a host of unique challenges, the main one being consistency. Bernamoff went into minute detail on the five “tiers of variability” in the production of his specialty, Montreal-cured pastrami. Poised to write a philosophical memoir on the meaning of Deli, Bernamoff said: “Your sandwich can’t be perfect every time,” he explained, but that’s the beauty of it. “Deli meats have a life of their own.”

Then there is the economic reality. Using quality, ethical meat rules out the vast majority of the American meat supply, making availability a problem. (Just a week ago, Saul’s had to temporarily discontinue their pastrami due to a change in ownership at Niman Ranch.) Then there is the labor cost. Kenny & Zukes employs 70 people for a restaurant that seats 65. Mile End has a similar ratio. All of this means that compared to old school delis, prices are higher for smaller portions and pickles are no longer free.

The specter of authenticity did not disappear for long though. “How can you call yourself a Jewish deli if you’re not kosher?” asked an audience member. Bernamoff was eager to respond, saying: kosher meat is low quality, inhumane, ecological unsustainable, and overpriced, not to mention the abysmal labor practices. In short, “kosher meat is kind of a scam,” he declared. Levitt pointed towards attempts at ecologically conscious, ethical kosher slaughterhouses but said that at this point, they are too scare to be viable sources for restaurants.

Gordon didn’t serve bacon for years out of deference to the Jewishness of the Deli — until he realized that he was the only one who cared, he explained. At the end of the day, his (mostly non-Jewish) customers want bacon with their breakfast. Bloom recounted his attempt to make kosher pastrami for his father. He found that at four-times the price of his top-quality (non-kosher) beef, it was prohibitively expensive. Levitt, the veteran of the bunch, put it in perspective. “Deli is a small slice of the Diaspora experience and much of that experience in this country has been secular.”

As these chefs are proving, Deli is as much about reinvention as it is about nostalgia. They join a new breed of artisans who use their craft as a way to forge meaningful connections with their daily labor and the urban community. Technique and feasibility were the main topics but the question of purpose and meaning was never far away. What does it mean to dedicate oneself to this thing called Deli? “We’re looking back at a food about which we all have strong feelings and strong memories,” explained Bloom, “and we want to share it.”