When Are Your ‘First Fruits’ Really the First? 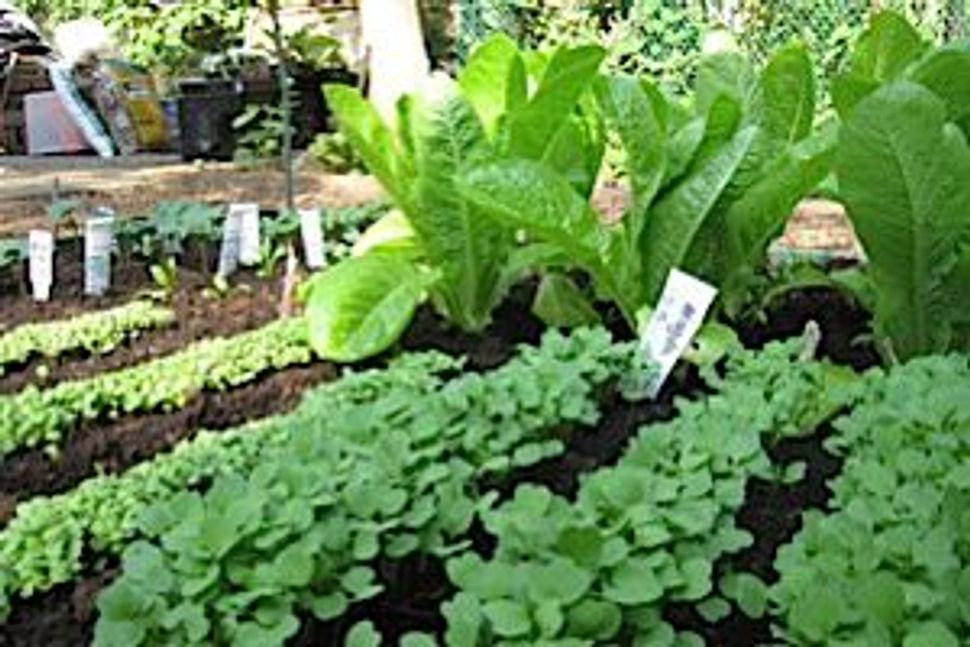 A few weeks ago, I suggested that those of us living outside the land of Israel (or in an otherwise distant place from wheat and barley cultivation) might use the Omer as a time to “count down” to the harvest of another more familiar crop that grows closer to home. What will you be looking forward to seeing at the farmer’s market? What crops are growing on a field somewhere, getting ready for harvest right around the waxing summer moon?

I decided to take my Omer countdown to the next level: I planted a garden right after Pesach, and harvested my first arugula right before Shavuot.

Gardening and farming is an ongoing process, a constant reparation of previous damages, and preparation for future growth. Cutting down what has died, turning under and planting anew. Given this cycle, it’s interesting that we still mark a time of “first fruits” right around Shavuot. When does the cycle actually start? Is it when crops are sown, or when the ground is prepared in early spring, or perhaps when the compost is spread the fall before? Tilth, that essential quality of organic soil that describes its health and composition, is built up over decades. Each first fruit is but a preparation for the next and the next.

To answer these questions, the rabbis established that Tu B’Shvat would be the New Year of the Trees, the moment in time to separate “last year” from “this year,” to separate “last year’s harvest” from this year’s “first fruits.” But if you have any sense of agricultural time, you know the distinction is arbitrary.

Unless, of course, you’re starting a garden from scratch. Which is why our first harvest this year was so extraordinary: it really was the first!

We had a few challenges to planting a vegetable garden in Brooklyn, but we also had a few things going in our favor. Most importantly, we had space — a backyard 20’ by 60’, and our chickens only live in the back half. Trees only shade part of the front half, so we had land and light. A hose attached to a spigot in our basement, which runs out the half-open basement door, would provide water for the plants.

But when we tested the soil, the tests came back showing we have toxic heavy metals in our soil. The plants brassicas like broccoli especially, especially could soak this up and the toxins could settle as dust on the leaves of other plans. Starting a garden in pots was an option, and we have a few planters with herbs, flowers, tomatoes, peppers and kale.

But after our time spent on organic farms, my husband Naftali and I wanted a few more options than simply pots and buckets. So we scooped out some of our dirty soil, lay landscaping fabric and gravel, built up walls to make raised beds that we filled with soil and composted manure from a local nursery. A smaller bed holds herbs, and a larger, 4×8’ recycled plastic model holds deeper rooted plants like tomatoes, peppers, eggplants and carrots, as well as the shallower-rooted lettuces, salad greens, radishes and turnips.

And arugula, which sprouted eagerly in straight rows, swelled then burst forth with true leaves, a rich green, nestled together in a thick band ready for an easy harvest. We took kitchen scissors and snipped up the row, exposing thin white stems as we gathered the leaves in a colander.

Wash. A little oil and lemon juice. A first bite. Sunset and off to shul for a night of learning.

I’ll tell you another time about the differences between farming and gardening (imagine: just four pepper plants to tend to, where I once had 600!). But for now, it just seemed special that our first fruits, literally, the very first fruits ever from this soil in this backyard in Brooklyn, coincided with a holiday just for them.

When Are Your ‘First Fruits’ Really the First?