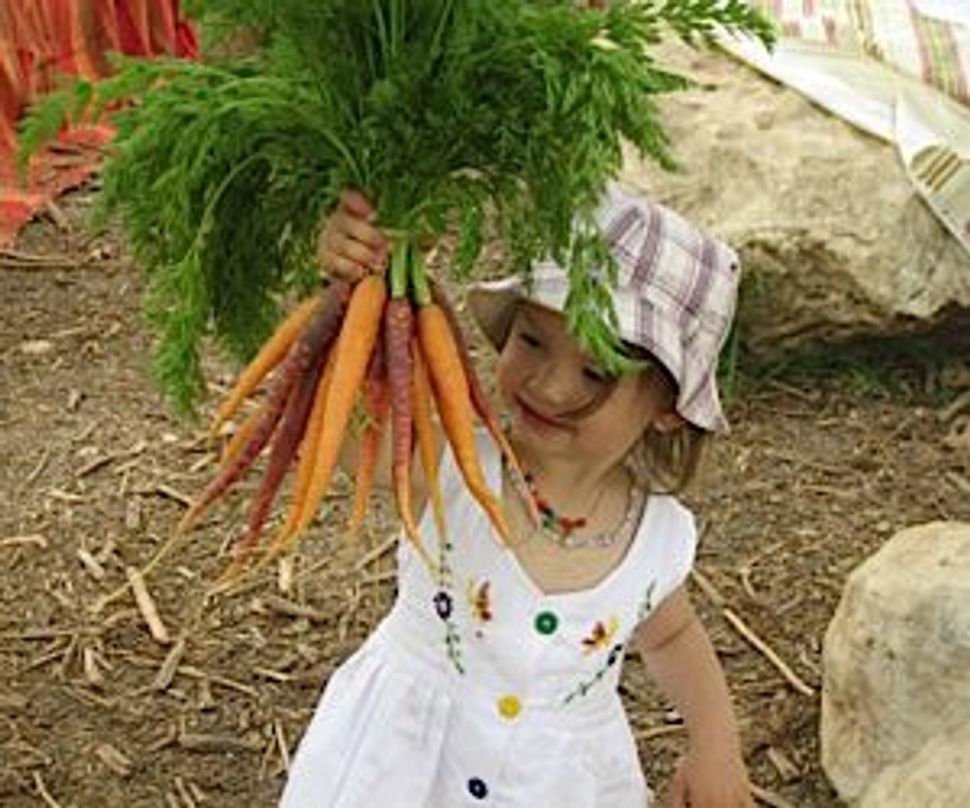 Image by Courtesy of Hazon

Agudas Achim a Conservative synagogue in Columbus, Ohio had installed a garden about a year ago, but as with many synagogue garden projects, the enthusiasm around it waned. When synagogue leaders heard about their congregant Ariel Kohane’s experiences in the Adamah program, they hired her as an Environmental Scholar in Residence. They saw the potential beyond offering a few “green” programs. With her experience, Kohane could develop a program that would inspire younger Jews to connect to the synagogue community through environmental ethics, food and spirituality. A new and exciting culture could grow from its garden.

Now, when synagogue and other community members see the garden, they have a broader context of food production, gardens and local farmers. “Judaism isn’t just about Shabbas morning,” says Kohane. “It’s about the way we live.”

The new initiative is already bearing fruit. From divrei torah during services to one-on-one meetings with educators and community members, the synagogue is participating in conversations that highlight Jewish life, environmental concerns and food justice. This summer, Kohane is facilitating a garden-based experiential camp for its children and weekly adult education classes, and will be bringing the community together for an educational chicken shechita (Jewish ritual slaughter) in July.

JCCs are also innovating successfully with food-based programs. National initiatives like JCCA Grows are exposing broad segments of the community to organic gardens used to address hunger. In the small, tight-knit community of Asheville, North Carolina, the JCC didn’t stop after building a garden, it developed a curriculum to help its preschool children understand and discover Jewish and environmental values. Lael Gray, the Asheville JCC program development and marketing director is one of the driving forces behind Ginat Ha Yeladim (The Children’s Garden Curriculum). Her passion comes from years of teaching and directing the preschool and raising her own children.

“Whatever we can teach our children in those first three to five years in terms of values, caring, empathy can have the most impact long term,” Gray says. Even in a community as outdoorsy and environmentally active as Asheville, children were spending the majority of their time indoors. She and her colleagues were looking for a creative way to engage preschool children and their families with the natural world.

The garden’s part-time coordinator works closely the JCC’s Judaics Specialist to implement a new values-based curriculum that incorporates the garden into trainings for all the preschool educators. Gray stressed the importance of helping teachers to use the garden as a powerful resource for achieving curricular goals of their classroom, such as learning about Jewish values, the Jewish calendar, and holidays. They have generously made their innovative curriculum available through the JCCA to early childhood programs around the country.

Kayam Farm, at the Pearlstone Retreat Center outside Baltimore, has education and outreach at the core of its activities. Since planting their first seeds, Kayam has been engaging and teaching volunteers as their Jewish farm grew. They host school, camp and synagogue groups onsite and have developed curricula to educate their visitors about Jewish agricultural traditions.

Their new initiative, Jewish Community Gardening Collective, focuses on trainings with institutional leaders throughout the greater Baltimore area. One of the most important components of their model is that in order for an institution to be involved in the collective they require that the institution convenes a team of leaders (including a lay leader, a gardening enthusiast, and an educator). These teams bring a variety of strengths and skills to the table, and also create more overall buy in and support at their institution, thus ensuring that the garden will succeed.

One of the newest and most exciting examples of agriculture/education integration is EKAR Farm in Denver, Colorado. EKAR is not only an urban Jewish community farm focusing on donating its harvest to emergency food providers, but it is on the campus of a Jewish day school, the Denver Academy of Torah. After an extraordinary first year of beginning their operations, in which they donated 7,000 pounds of produce to Jewish Family Services, EKAR received support from the Rose Foundation to focus more deeply on curricular integration with the day school. They are also developing educational models for early childhood programs in Denver and teens in the area.

These are just a few examples of exciting innovations in the Jewish food movement and the field of Jewish experiential education. The curricula and training models evolving at these Jewish institutions are available as models and resources to any Jewish educator no matter the size or scope of your garden. As with any innovation, key to their success seems to be the support of the institutional leadership, including lay people and administrators as well as financial commitments from central Jewish agencies and foundations. They also emphasize collaborative training models that help creative educators network, share ideas and continue to strengthen their initiatives. Consider this a recipe for getting extra sustenance out of the gardens in your own Jewish institutions.

Naomi Rabkin is an educator, organizer and food enthusiast who lives in Atlanta, GA with her husband and two children. She is Executive Director of Limmud Atlanta+SE and the founder of the Jewish Food Alliance, a coalition committed to building awareness, skills, knowledge and community around food access, sustainability and culture.